OK this is an easy one today: 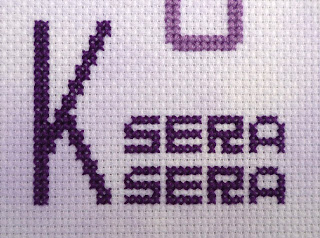 Que sera sera:
exclamation - an understanding that future events are out of our control
translation - from Spanish and translated as 'what it will be will be'
origin- the first written recordings are in the 16th century when English noblemen started using it as their family motto. The Spanish "Que Sera Sera" can be found on a tombstone dating 1559 whilst the similar Italian version "Che Sera Sera" on one dated 1555. The first use the phrase in literature appears in Christopher Marlowe's Doctor Faustus published in 1604 in which he used the Italian spelling with the translation "what will be, shall be".

Also:
Que Sera, Sera - a song written by Jay Livingstone and Ray Evans in 1956 for the musical The Man Who Knew Too Much. It won an Oscar in 1957 for the Best Original Song and was later popularised by Doris Day in 1964. Each verse follows the singer as a young girl, young adult and mother through time as she looks to and questions what the future will hold with the inevitable answer "que sera, sera, whatever will be, will be". The song has featured in many films and been recorded by numerous artists over the last 60 years. And now that I have written about it I can't get it out of my head! Here's a link if you want it in your head all day too!

OK, how difficult was it going to be to find charts that reflected que sera sera? Not that difficult actually! 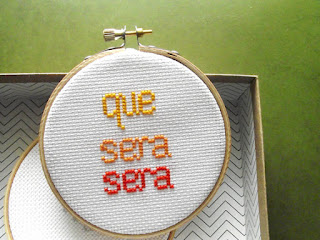 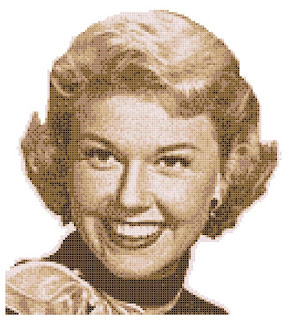 
My personal Ks are:
'k'non-existent - I can't think of any!

And my finished K project chosen was: 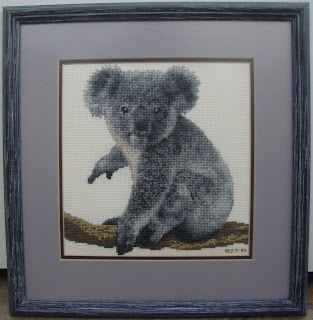 Koala (from a magazine)

This little chappy was stitched at a time when DMC were having trouble with the continuity of their greys. Luckily, as he contains a lot of blended stitches, I was able to fudge a bit by using Anchor threads as well. Apart from his knee, it's not noticeable. Since then, whenever starting a project, I have always made sure I have enough of each colour to complete the whole thing. Something inside me no longer trusts colour continuity between batches.

Back with an obvious L tomorrow.
Rachel x

Your koala is so cute! Must have been a fun project :)
Will be back for L!

"K"nock me over with glee what a fun post. Haha. Love your Koala. I totally understand what you mean by color continuity. It's scary how much change there is between batches.

So do you have a link I can click on to get "K sera, K sera" out of my head... Oh my goodness, the memories (wonderful ones) - my mind just over flowed. This was a perfect early morning read.

Fun koala, and definitely a good habit to get into. I've had that issue as well. Your topic reminds me of that Hitchcock movie, The Man Who Knew Too Much?

Gee thanks for putting that song in my head Rachel. lol Your Koala is adorable. I have 3 skeins of 318 and they are all different.

Nice one! Although I wonder what will be "Q" now! You are so creative in your choices, I love it!

I love your koala! A lesson to us all about colour consistency. He looks gorgeous despite the issues you had with your thread.
Who knew you could get a cross stitch chart of Doris Day?! I love the Whatever one. I would stich it for my desk at work - if only I had a desk! We hot desk in my office.

Thanks for the earworm! Love the Koala but there's no way I'd stitch all those shades of grey!

I used to say Que sera sera all the time! Guess cuz I grew up more in the Doris Day era. :) Everyday I look forward to seeing how the letter of the day is going to be incorporated into subject, the pictures are interesting.

Great update Rachel!
Love the letter and your koala, such a cute piece!

Koala is so cute!!:) I have plans to see him live this year

Very interesting to read about this saying. I didn't know that it was already so old. And I love "Whatever", lol.
Colour continuity bothered me lately when I was pulling out an old WIP and realized that one colour of the border had changed in the meantime. And I didn't have enough of the old thread. For overdyed threads that's normal but I hate when this happens with DMCs.

Brigitte I have some older DMC. If you would like I could send you my bobbin of whichever colour it is for you to try?