For today's alphabet we have: 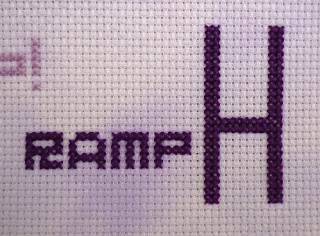 
Surprisingly enough, I couldn't find any cross stitch charts which conveyed human rampage, violence or something happening uncontrollably! So I've shoe-horned in some animal ones: 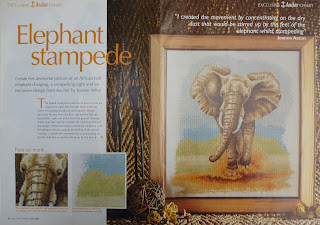 Elephant Stampede
(OK, there's only one elephant, but you get the idea) 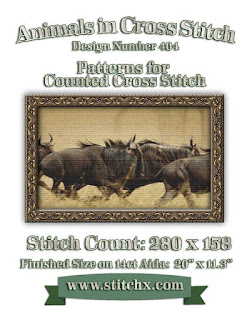 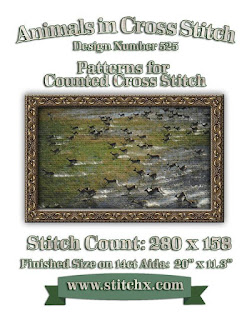 
My personal Hs are:
Heather - my beautiful and talented 14 year old daughter who likes to try her hand at almost anything.
hair - my medium to dark brown hair is usually worn in a bun but when loose comes below my waist. I have had long hair most of my life but this is the longest it's ever been (mainly because I'm in competition with Heather whose hair length is not far behind mine).


And finally my finished piece for today: 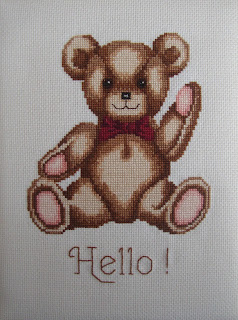 Hello Bear from a magazine

This little chap was stitched in 1995 and should have a set of building blocks in front of him. But as I didn't like them and thought he was waving hello, I stitched that instead. Interestingly, he isn't actually on my page of finishes so I will have to add him in.


I / you have a day off from the A-Z tomorrow but I'll be back on Monday with I.
Rachel x

Great job finding rampaging charts! That must have been a tough one. I can't wait to see the finished alphabet!

Just wandered around on your blog. You have a lot of very nice needlework! Glad to find your page :)
Stephanie Finnell from
@Randallbychance
Katy Trail Creations
Stephanies Stuff

You have a fourteen-year-old, I have thirteen :) My daughters hair were long just above waist and mine shoulder-length. She got a hair cut last month and now have just a little less than me :) We have proportionate similarities :D

Recognise your age, it's a teenage rampage! Well done on finding some suitable charts too.
Another cute finish.

Love long hair, it's beautiful, with so many ways to style it!

Very cute "H" update!
The stitching patterns you found were really wonderful and I love the Hello bear; adorable.

Your bear is adorable Rachel. You should show us a pic of yours and Heathers hair.

The little bear is so cute, he definitely looks like he's waving hello
Debbie

What a surprise! I love the way you work out your letters, so clever and I never know what to expect :o) Thanks for posting!

That's a really funny alphabet, lol. And those animal stampede charts go perfectly well with today's word.
Waistline, straight hair has always been dream of mine. My hair is so frizzy that it only stands out but never falls down, lol.

Grrr, the auto correction was working - I wanted to write "waist long".

Great choice of charts for your letter.
I really like to elephant one, it looks really colourful.
Cute little teddy bear finish too :)

Your Hello Bear is too funny. I find your Rampage Charts very different. And a true picture of why everyone, everywhere can find something they like to stitch.

What a "H"appy post. Love the Hello Bear and your change with the words instead of the blocks.