May Progress on DSDUCJFC 2015 Pieces

It's the end of May so time for another Challenge progress update.

At the end of April I set myself the task during May of finishing one of my remaining 50 Challenge pieces and working on four more. I also asked for suggestions as to which pieces you would like me to stitch. Replies included Dreaming of Dolphins, any of the Margaret Sherry mice, the Harry Potter crests (especially Ravenclaw), Friends Forever and Pretty Little London.

With all that in mind I set about my May stitching.

I surpassed my targets because I finished not one but two pieces during May.....

* My Treasure from 27th February
* Friends Forever from 12th January

..... and made progress on another seven: 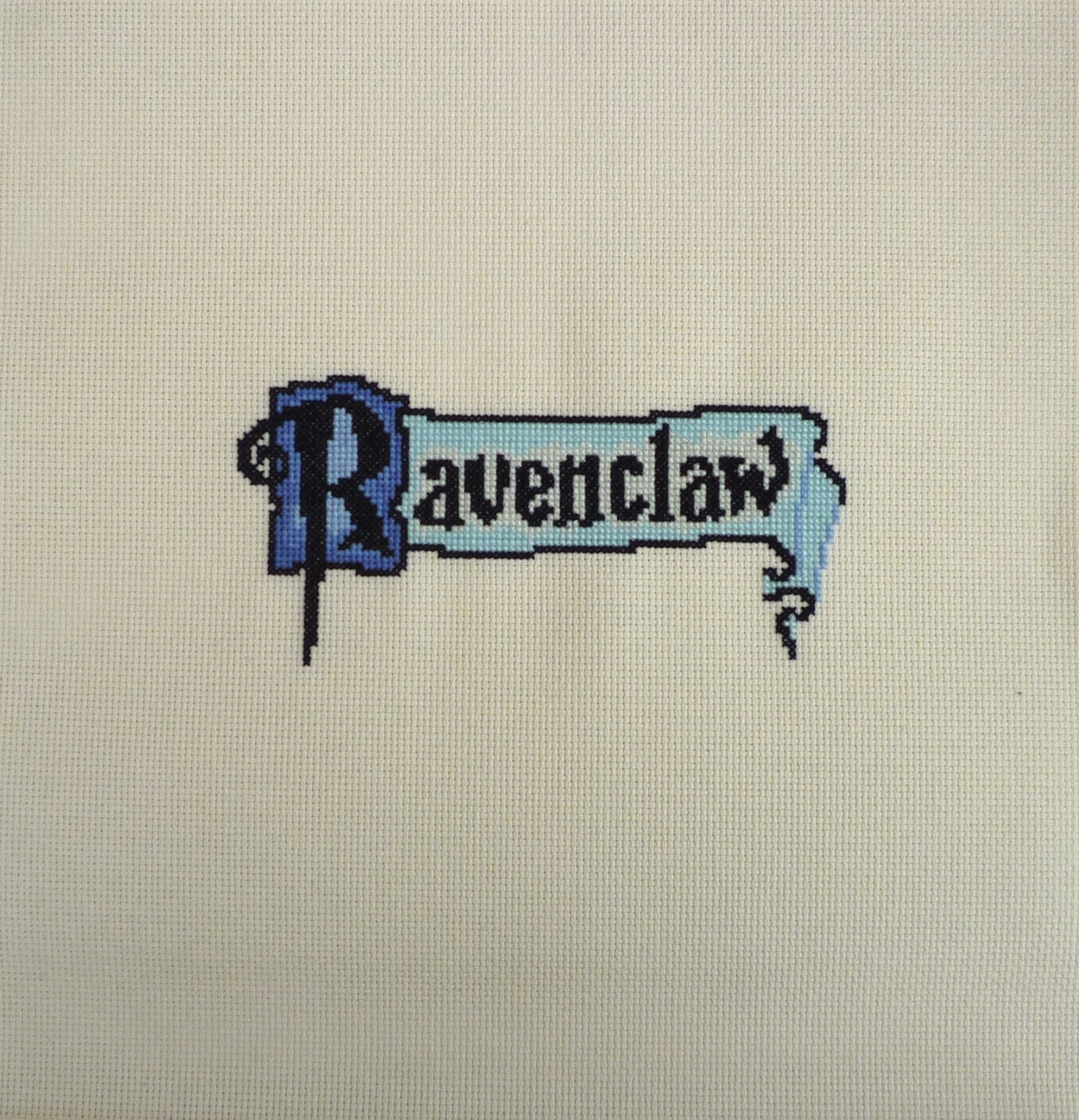 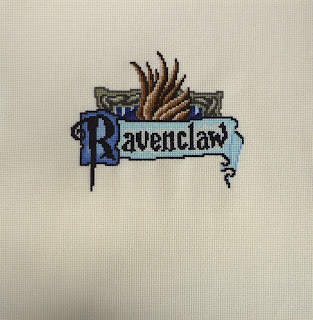 Ravenclaw from 18th February
finished the section above the banner 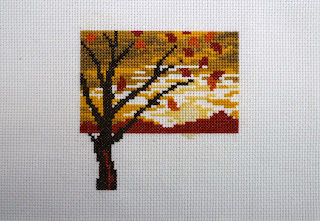 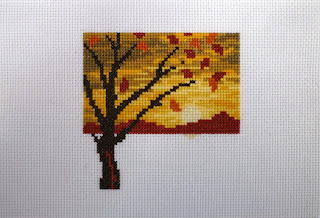 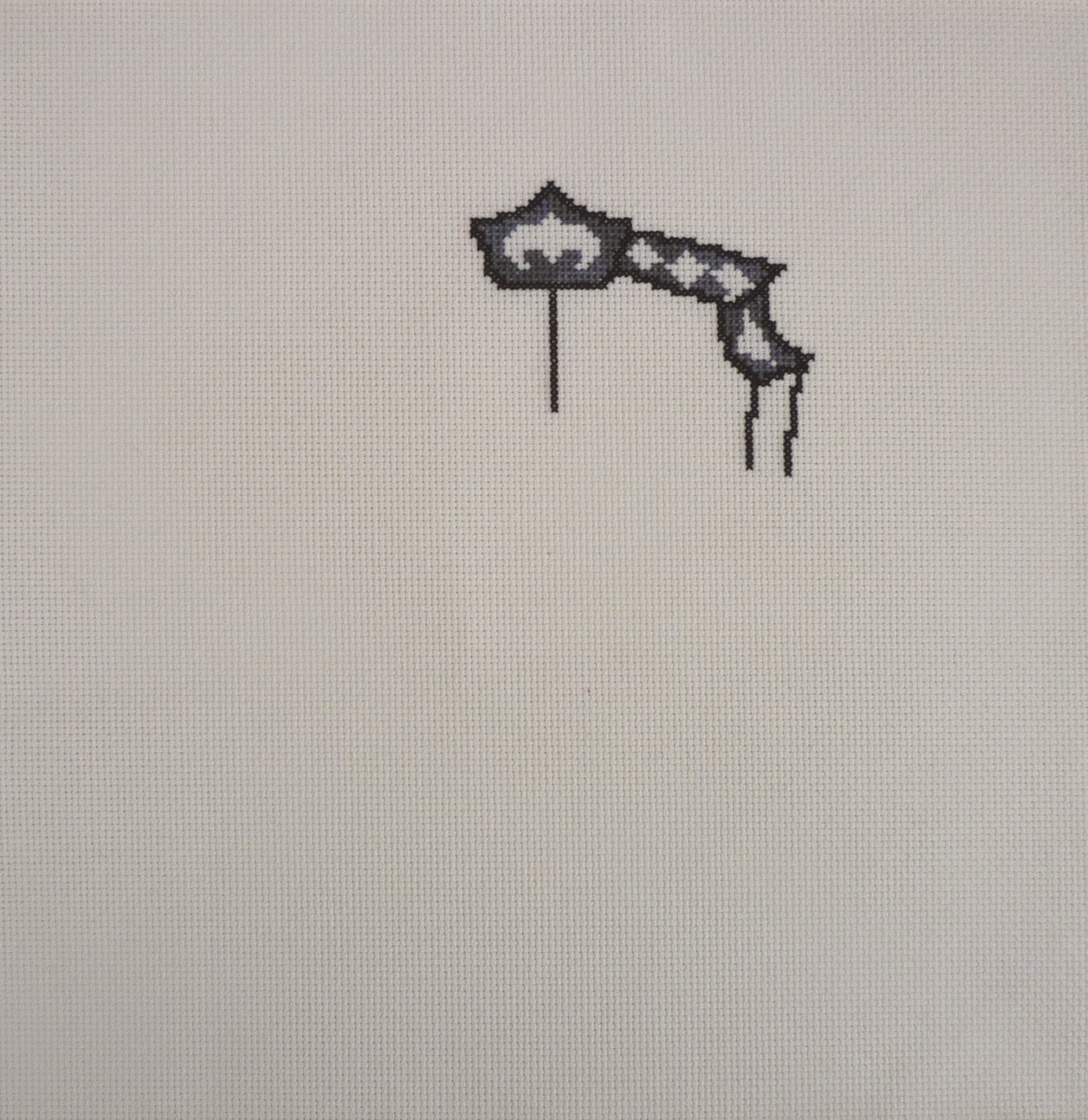 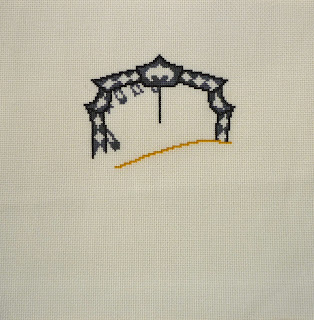 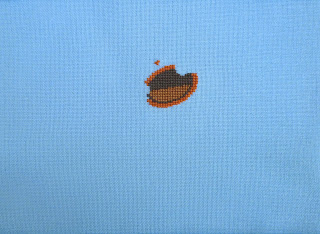 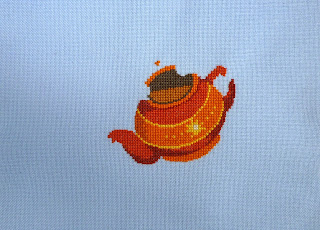 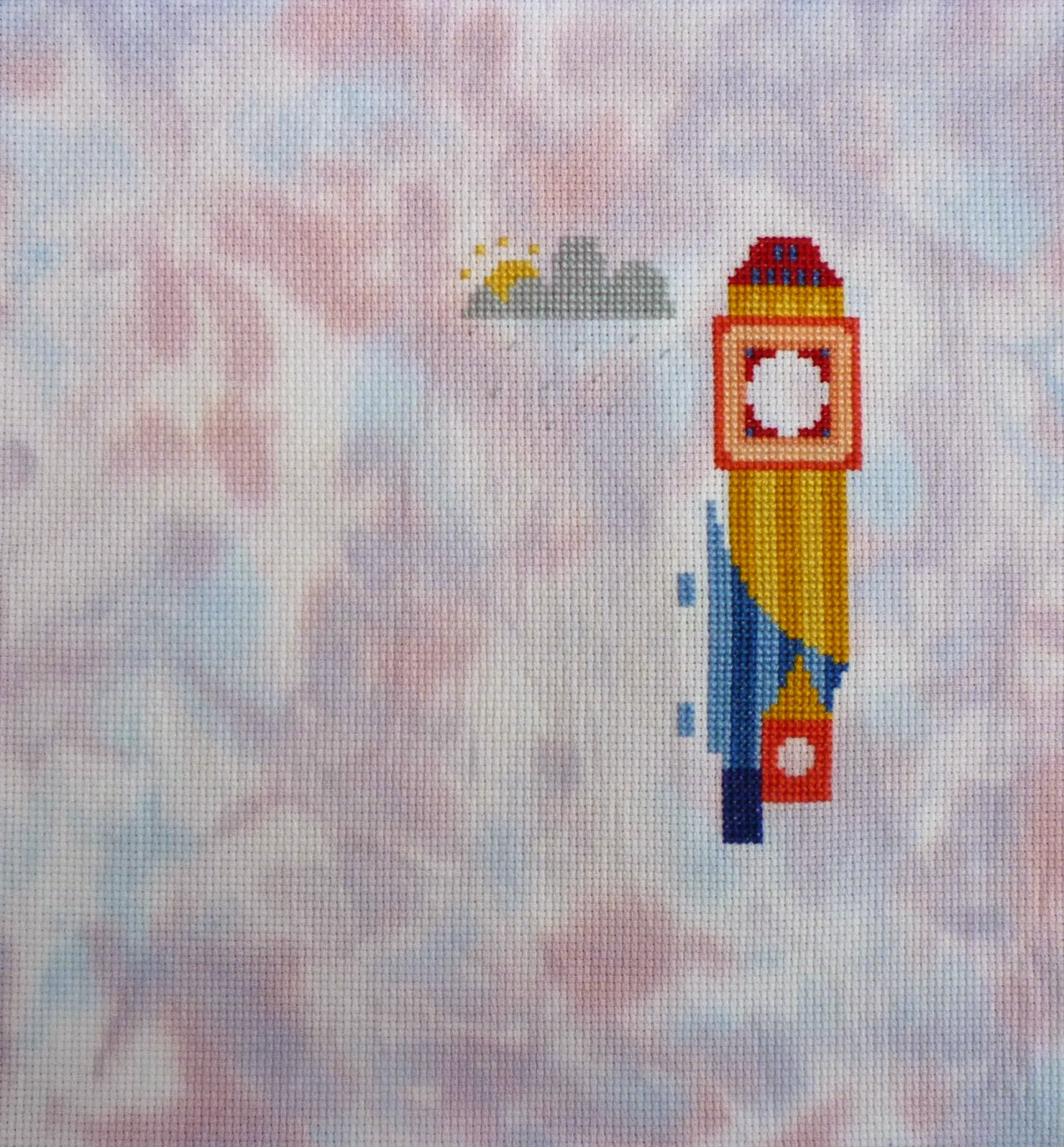 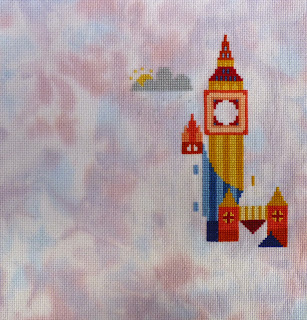 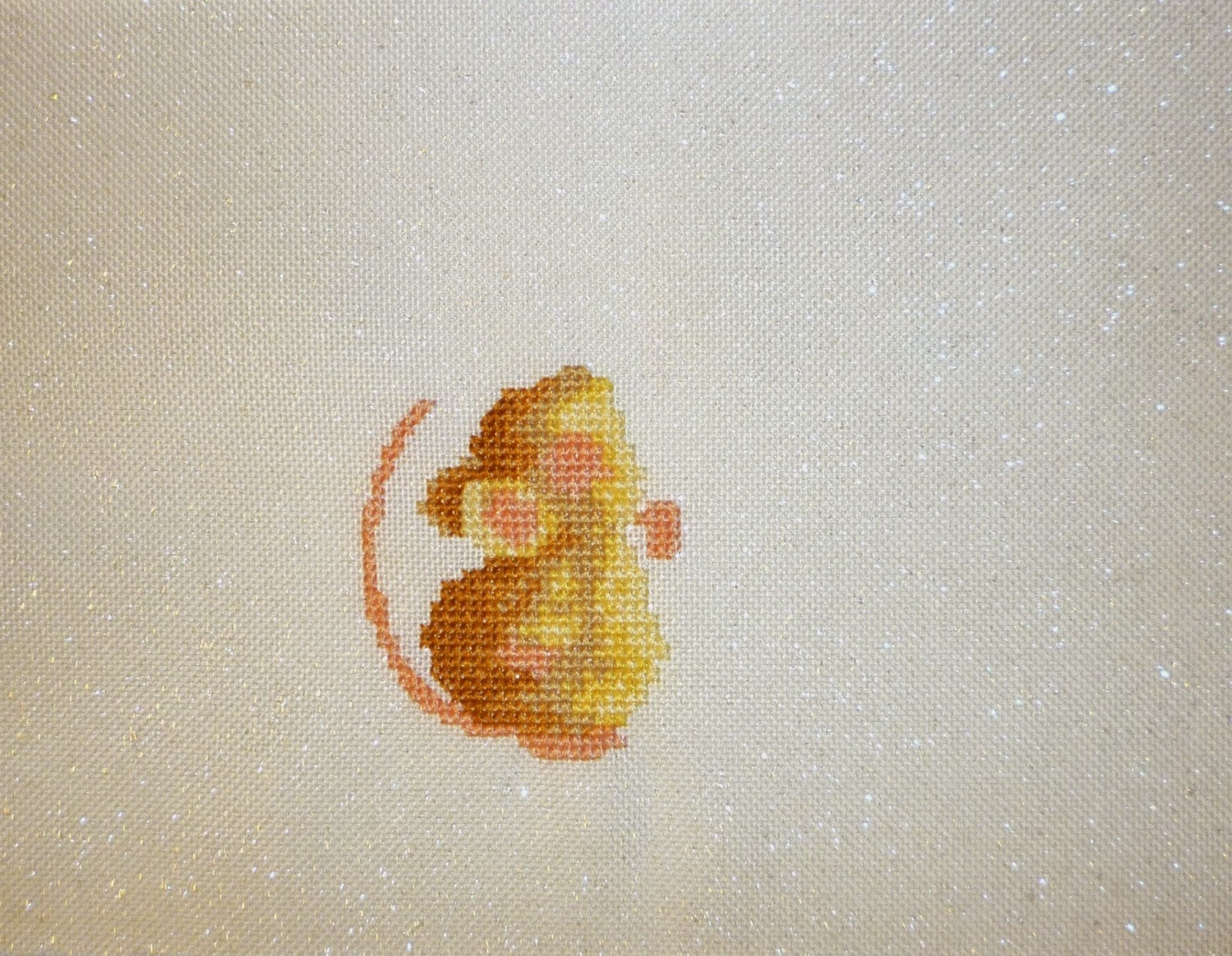 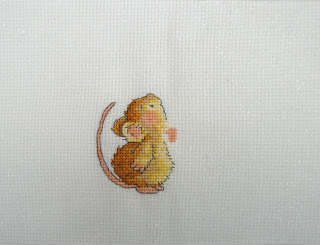 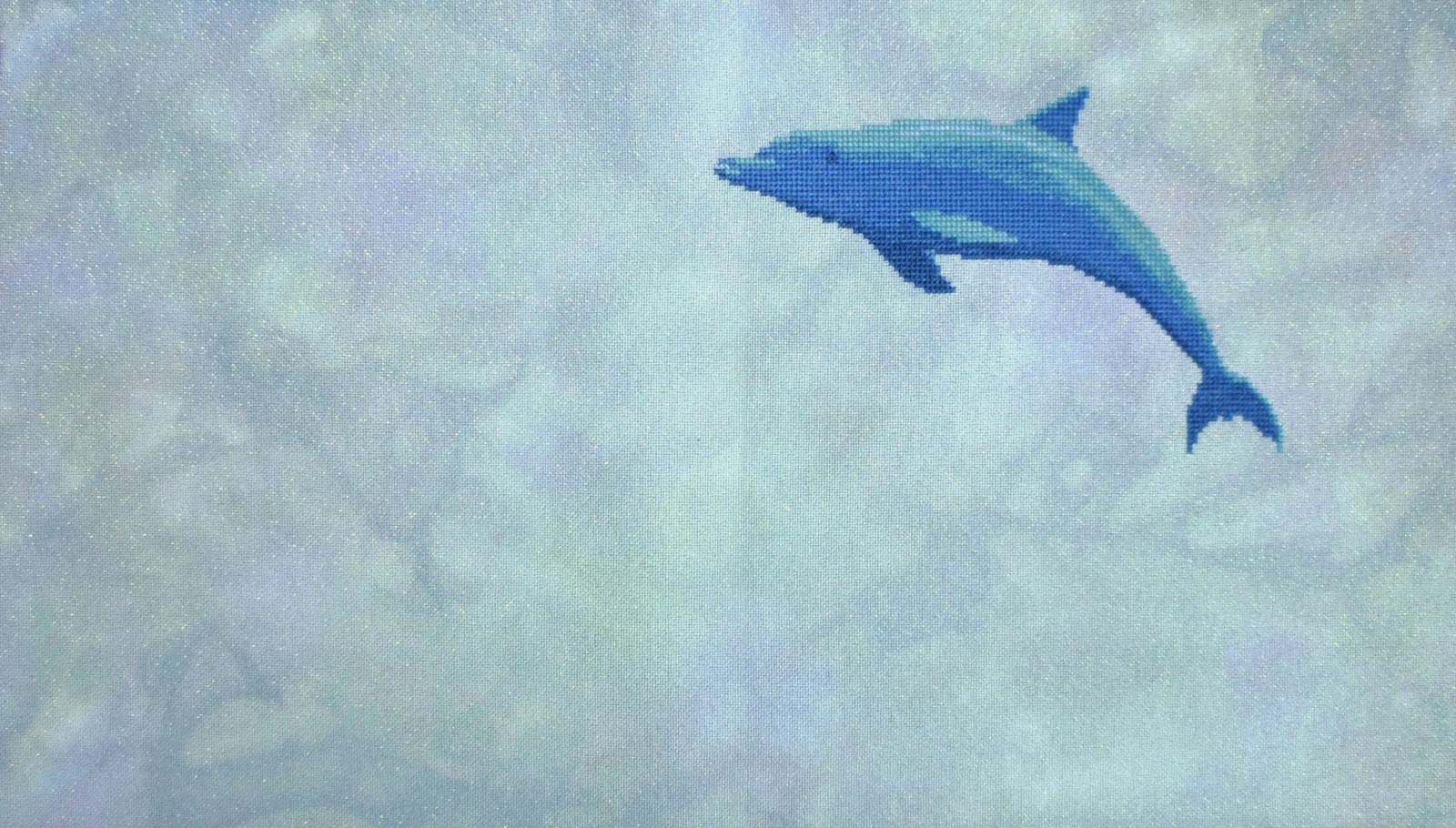 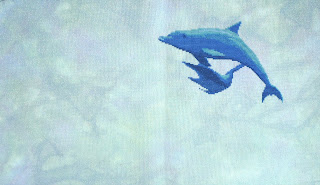 Dreaming of Dolphins from 7th January
started the second dolphin


I really enjoyed the additional challenge this month of trying to stitch on as many projects as possible, as suggested by my lovely commenters. I won't ask for suggestions for June but probably will again for July.

My June Challenge targets are again to finish one piece and stitch on at least four more. I've already decided which ones I'm going to work on but you'll have to wait until the end of June to find out!

I hope Debbie would have been proud of my commitment to and progress on her Challenge. :)

Here are the financial details of May's Stitch From Stash:

Snowman Row by Ursula Michael (download from crosstitch.com)
These will be stitched as nine individual projects. 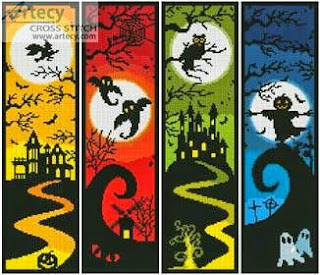 Halloween Banners by Artecy (download from crosstitch.com)
(thank you Heather of Fantasy Cross Stitch for introducing me to these!) 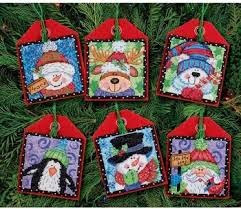 Christmas Ornament Pals Kit by Dimensions
(thanks to Katie Jeremiah's Mom for tempting me again!)

I feel very guilty about buying these but they were all on offer and I was feeling down in the dumps that day - a lethal combination! 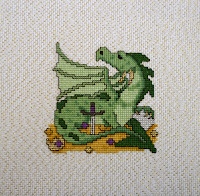 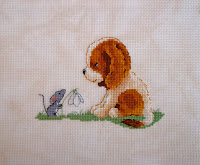 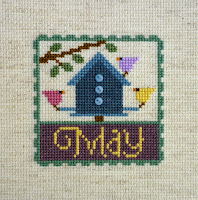 
Although slightly bigger, Friends Forever was categorized as 60x60 as a lot is unstitched. I  also claimed only 75% of the bonus as it became a qualifying project after 1/4 completed.


My closing balance this month, along with next month's budget, will be spent on threads. Let's see how close I can get to zero for my end of SFS-A closing June balance!

I'm back again with another Challenge finish!

This is Friends Forever from 14th January. My thanks go to Tina for suggesting I should work on this one during May. It's not a WIP I would have chosen but once picked up I just had to complete it. So here are a finished Sam and Peeps with all the (ir)relevant details: 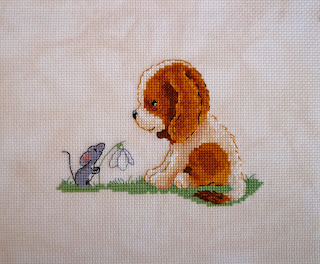 
Because I enjoyed stitching this one so much, I'm hoping my other Sam and Peeps WIP will also receive some attention during May or June. But we'll see. After all, another two finishes in the last couple of days means a slightly fuller Box Of Shame to deal with. Uh-oh!

I apologise for being absent from blogger for a while. Yet again I'm behind on reading and commenting on blogs but I'm hoping to catch up this week.

In the meantime I have another totally unplanned Challenge finish for you.

This is My Treasure from 27th February. I was actually looking for a different WIP when this one caught my eye. I only had the non-green colours and backstitching left to do so thought I might as well try to complete it. Here it is with all the boring details: 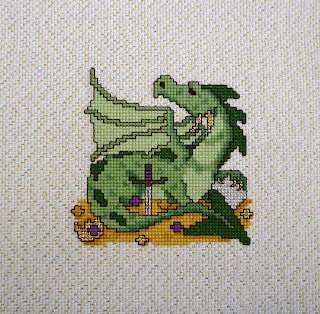 
I have to admit I did not really enjoy stitching the Kreinik, although the result does look good. I think Kreinik, like most metallics, is one of those threads you either love or hate. In my case, hate!

Behind the scenes I'm still plodding on with other Challenge pieces. Very slowly my two DSDUCJFC progress bars are being filled in. Time-wise I'm almost 1/4 of the way through January's projects and just over 1/8 through February's. I don't know whether to cheer at the amount done or figuratively cry at the amount remaining!! The former I think as speed was never the most important consideration in this Challenge.

Another month and another stamp which I couldn't wait to start. Most of this was stitched whilst watching the final two sessions of the World Snooker Championships on Bank Holiday Monday. Pure bliss! 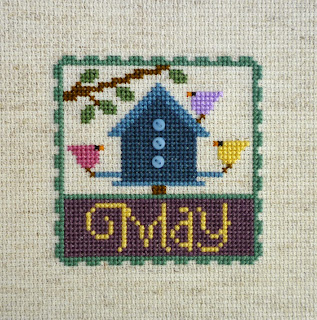 
Not much else to say really, other than it was another fun stitch. It will go in my box of shame for the time being but hopefully not be in there too long. I must make the effort to put down my stitching for a while and actually start assembling some smalls. I've made the plans - I've just got to put them into action!