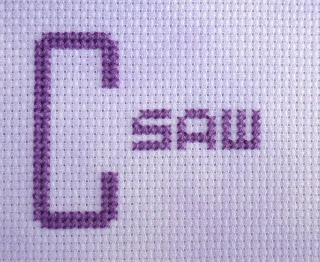 See-saw (also called a teeter-totter)
noun - a long plank balanced in the middle on a fixed support, on each end of which children sit and swing up and down by alternately pushing the ground with their feet
verb - to change rapidly and repeatedly from one position, situation, or condition to another and back again


I couldn't find any specific see-saw charts to show you so broadened my search to playground equipment: 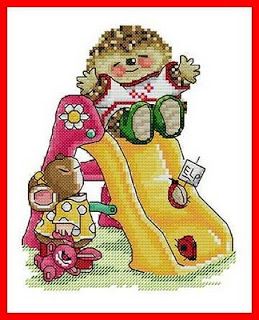 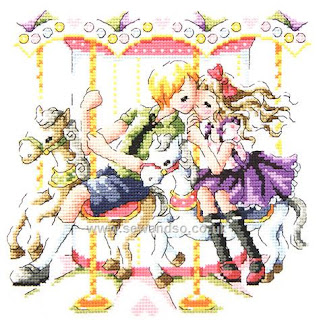 Merry Go Round by Soda Stitch 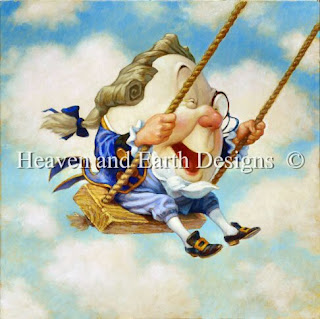 Humpty on a Swing by Scott Gustafson (HAED)


My personal Cs:
Crohn's disease - an illness I had in my 20s and from which I am now in remission. I weighed just 6st 4lbs (88lbs / 40kg) when the doctors finally realised the medication was not working and I needed an operation.
Clacton-on-Sea - the town in Essex in which I was born and raised.
Cockatiels - I have two very tame very mischievous cockatiels who enjoy "keeping me company" whilst stitching by pulling out threads and nicking my needles. I don't stitch on big or important projects when in their company!


And finally my finished pieces for the letter C are: 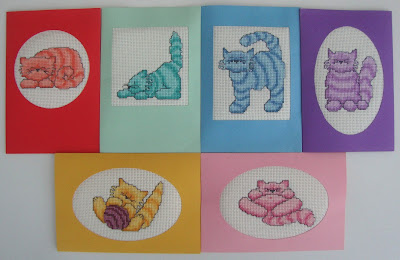 Colourful Kittens
stitched way back in 2000

These were such a fun stitch each involving just three main colours and some grey backstitching. I was lucky enough to find matching aperture cards and still love them all now!

How are you enjoying my A-Z at the moment? Let me know.
Rachel x

CC... love your C post!
My boss has Crohns... from what I know of it it is not nice. Good to hear you are in remission!
Will now go and read your A and B post and then I will have done the A B C's!!
Hugs xx

Cute kittens! I used to love our seesaw though I don't think I could have managed 75 minutes never mind hours!
Cute charts to tempt us with today too though Humpty on a swing sounds like a recipe for disaster!

You found a nice mixture of interesting details about you and your stitching. And I sometimes even learn a new word, like See-Saw this time, lol.
Love these cat cards.

What adorable little kittens!!!
I really like that Soda Stitch design too (and no, I'm not hinting) :)
Nice to know a bit more about you too. Could we see a picture of those little stitchy helpers you have just for you?

Great post. My dad made me and my sister a see-saw when I was nine. It's still here and now my grandkids play on it. It has given us lots of good memories and one broken arm. LOL

Love your posts! The docs want to test me for Crohn's along with a bunch of other stuff. I just refuse to take the test cause I'm stubborn. I figure it will come down to them telling me I'm not allowed to eat something I love like pasta and I won't listen anyway haha. Love the patterns you showed. The cats you did are purrfect!

Clever! And I did not know see-saws were from Korea. Lovely stitchings, the colorful kitties were quite cheering :) Well done!

I'm really enjoying your posts Rachel. What is the chart that your stitching. It looks very interesting. I love all of your cat finishes. Those are adorable.

I think your A-Z is very informative and interesting. There's some great stitching, good info and a little intro to your life as well. Keep up the excellent posts! :)

Wonderful post Rachel!
I am really enjoying your A to Z posts and I just adore all the cute cat pieces.

Excellent post :) 'Saw' bottys sitting on a see-sew for that long!! I love the Country Companions but stitching the hedgehog's spikes is slow lol I can't wait for your post tomorrow :D

We used to build them from planks of wood across cinder blocks. Crude but effective until the wood split. LOL

Cute kittens!! You come up with quite a lot of things every day to post about.

Who knew there were so many interesting facts about seesaws! Glad to hear that you are in remission from Crohn's disease and that the doctors realized something was wrong with the meds you were taking. Your Colorful Kittens are adorable ;)

Love the teeter-totter. My father made one for us by attaching it to a tree. The board is long since gone but the bar is still encased in the tree. :) Your colorful kittens are so cute!

Glad to hear that you are in remission too. Interesting information about the seesaws too. Is this a bought chart or are you making it up as you go along?