This month's theme is Fancy Finishes.
So 'Fancy Finishes' could be interpreted two ways, the stitching itself being finished off fancily (with beads perhaps?) or the way the finished design has been fully finished off. I'm going to go with the latter since, apart from adding maybe a few beads or a bit of Etoile, none of my stitched pieces are particularly 'fancy'.
Those of you who know me will know that fully-finishing off is something close to my heart. It started a few years ago when I not only felt guilty about the amount of un-finished finishes in my Box Of Shame, but from also noticing that many stitchers tended not to fully-finish off their stitched pieces either.
So I started the FFG SAL, which has resulted in me FFOing over a hundred pieces in the last three years, and other participants finishing nearly one thousand pieces! And amongst them are numerous 'fancy finishes' although, unfortunately not mine!!
My finishes tend to be framed, made into cards or made into simple ornies. But there have been a few which have been a little more fancy.
There are currently three mini pillows which have ruched ribbon (which took ages to gather and attach): 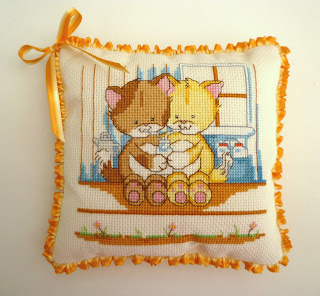 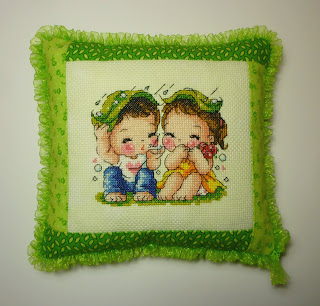 A Shower by Soda Stitch 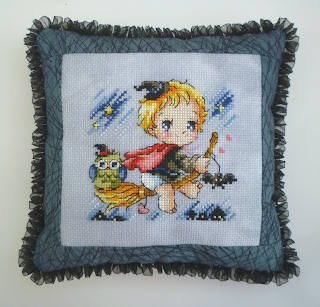 A Little Wizard Of The Night by Soda Stitch
(the matching A Little Witch Of The Night is still languishing in The Box)
A few which use tinsel wool, usually two different colours twisted together: 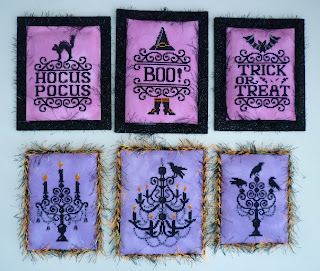 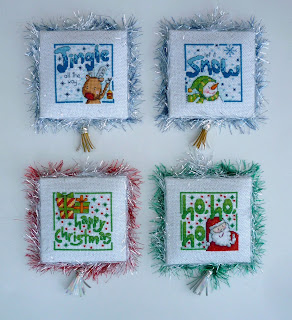 Christmas Cards by Durene Jones (etsy)
(four of the six; the other two will be FFOd soon...) 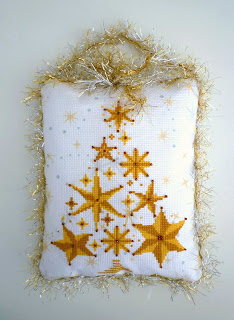 Gold Star Tree by NandiStitch (etsy)
And even one where I actually attached loads of pom-poms individually rather than use pom-pom trim. I must be mad! 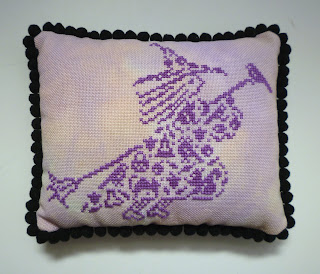 French Country Witch by JBW Designs
But that's about it! I'm not into making purses, or bags etc., and keep saying I want to branch out and try something new in the way of FFOing, but I never do! Maybe I will in 2022...? Hopefully you've all got something a bit more fancier than my finishes to show!
Next month's theme is Designer of 2022 i.e. a designer I am keen to stitch. Argh! Where to start!!!
Take care,
Rachel x
Posted by Rachel at 7:23 pm

Thanks for taking part in The People's Choice this month. But first, how can we have been FFO'ing for three years? It feels like only last month we started! Love the tinselly trim on those pillows. I need to experiment more with trims.

Love all of your beautiful finishes Rachel. I wish I could just finish one like these.

Ohhh I love them all but the ruched ribbon is my favorite by far!!

Oh, I do love seeing these again, so pretty with the trim.

So many beautiful finishes, I love the ruched ribbon and the tinsel ones are great finished too!

I think some of your finishes look very fancy indeed! Especially the tinsel wool was a great idea. 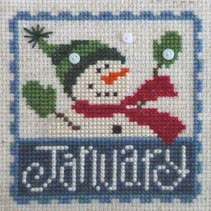