A Monarch A Month - Edward II 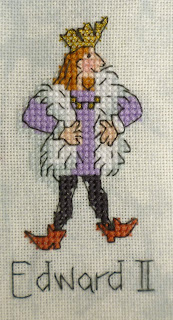 I have absolutely no idea why he's in this pose. Perhaps he had too dull a personality to chart differently, but I don't think so. See what you think.

Here's my summary of Edward II's reign. I'm really not happy with it but I think I've done about as much as I can do.

Edward became king in 1307 after his father's death. He was the youngest of 16 siblings but the only surviving son.

Edward quickly abandoned his father's 1307 Scottish campaign, but it was his defeat by Robert the Bruce in the 1314 Battle of Bannockburn which more or less marked the end of his Scottish policy.

In 1308 Edward married 12 year old Isabella, King Philip IV of France's daughter. However, Isabella had to compete for Edward's affection with two of his 'close friends', Piers Gaveston and Hugh the Younger.

Gaveston and Hugh, along with Hugh's family, were arrogant, influential and deeply mistrusted by all except Edward. Gaveston was captured in 1312 and executed for treason, whilst the 1321 Despenser War attempted, but failed, to permanently exile the Despensers from England.

Edward's estranged cousin, the Earl of Lancaster, was involved both times so, seeking revenge, Edward had Lancaster executed in 1322.


By 1325 Isabella herself wanted rid of Edward and the Despensers. She was able to secure enough resources and support from her lover, Roger Mortimer, to make this possible by agreeing to betroth her son to Roger's daughter.

Edward fled but was eventually captured. He had no real option other than to abdicate in favour of his son, Edward.

He died in September 1327 and was buried in Gloucester Abbey.

But Edward's reign wasn't all negativity and family feuds; he did try to ensure justice was fair across the land, and continued holding parliaments, thereby involving more than just the nobility in decision making.

He did, of course, have the usual problem with money - taxing too highly, and losing the confidence of people.

So next month, Edward III, the first monarch to become king before the death of the previous one.

I think your history lessons are great Rachel. Another awesome stitch.

Interesting, and now I know why I've barely heard of him. Well done stitching and no idea on the pose.

For some reason, I like the design of this king the best so far.

I love history. Have you by chance seen the 4 part series Britain’s Bloodiest Dynasty? It’s one of my favourite. I’ve seen it many times. I believe all 4 parts are up on YouTube.

He does look kinda whimsical but maybe that is his 'I've got a secret that you'll never know' pose? He seems to have packed a lot in his short life time and really didn't dull at all. Strange that she felt she needed to obligate her son's hand in marriage in order to free her's from marriage.

Thanks for another great installment of The Monarchs.

I think your summary is great - there isn't much else to say about him anyway! I love your restraint stitching one a month, especially as they are so quick to sew up. Are you sometimes tempted to stitch more than one in a month?

Oh my...he looks so happy in that pose with his little fur vest, but I guess his life wasn't all that easy!

Another great history lesson and another great woman behind the scenes!
Bothy should do a "Wives and Mothers of Rulers" sampler next.

Well, he looks proud and sure of himself!