This is the 13th month of this SAL, so it's ironic that this unlucky number should be accompanied by a lucky theme - cats.

I'm not a 'cat' person as such but we did inherit a couple from the previous owner of the first house we bought as he couldn't take them with him. Both were totally gorgeous and totally black apart from Bagheera had a white mark under his chin and Midnight had a white tip on her tail. But they have long since departed and I'm not sure my cockatiels would appreciate it if we had any now!!

Off the top of my head I couldn't think of many projects in my finished, WIP or stash piles which have cats on them. Then I looked through my spreadsheet and found I'd actually finished 31 pieces, have 7 WIPs and have well over 40 in my stash; obviously I'm drawn towards cats much more than I thought!

Now I'm obviously not going to show all of my cat pieces, so here are a random few.

These Purr-fect Pets were stitched from a magazine chart back in 2000 before I kept accurate records. I think there are only three or four colours in each one so were really quick and easy to finish. 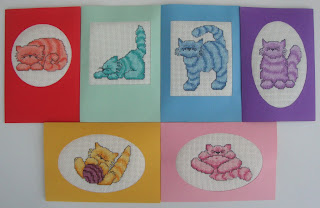 Sleepy and Big Eyes Kitty are two of a set of six sepia kittens by DMC. Sleepy was stitched between 2007 and 2012, and Big eyes Kitty in 2014. They could have been shown in the monochrome-themed SAL but I thought I'd put them in this one instead. I do have the other four in the set; I'm just waiting for that elusive 'one day' to arrive! 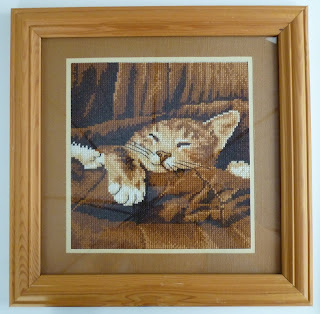 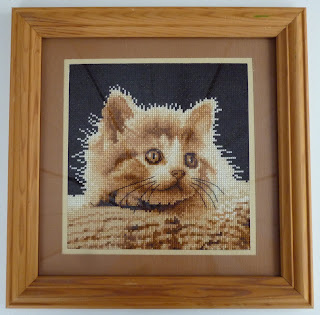 (the stripes you can see in the background are the spokes of an
umbrella I was using to try to stop reflection.)


This set of four magazine charts, called A Taste Of Tuscany, were some of the first pieces to appear on my blog when I started it back in 2014 (as was Big Eyes Kitty above, actually) so hold really strong memories of becoming a part of the online stitching community. I have no idea at all why they appeal to me, they just do! 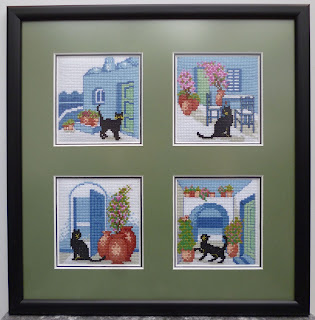 Out of my 7 cat WIPs, one is a large chart, so is on hold, and the other 6 were started for DSDUCJFC 2015 so are on my list to be finished sometime during the next four years. I'll only show the biggie which is OMG Tigger Is Out by UnconventionalX (etsy) which I've barely started. I'd love to stitch more though (famous last words!) since the confetti isn't too bad and the colours quite soothing to work with. Seeing the gridlines, I think this is the only project I have actually gridded, presumably to help with the confetti. 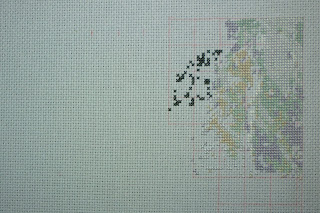 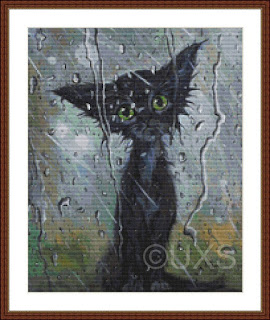 Finally, on my to-stitch list is this set of 12 monthly Nelson and Tibbs charts which were in a free-with-magazine calendar. I'd definitely start with my favourites and may not even do them all. Not that's it's worth thinking about at the moment as that 'one day' is still light years away! 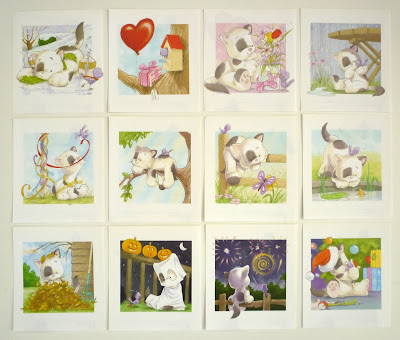 There, I've tried to keep it brief and am very surprised I wasn't tempted into showing lots more. No doubt I'll be able to fit them into other categories at some point.

Next month's theme is autumn colours - perfect for the time of year and right up my street!

Another awesome post Rachel. Love all of your cat pieces.

Thanks for taking part in The People's Choice this month with your wonderful selection of cats. I remember those multi-coloured cats being in the magazine too.
Your sepia cats are lovely and have reminded me of another project I wanted to include in my post!
Which is now up so you can join Mr. Linky.

You have some very cute cat pieces!

Fantastic post. Love all your cats. The calendar set is adorable of course! I swear I remember big eyed cat.

Wow, so many cats, Rachel!
I used to keep records too ..... once upon a time!
I have a couple of cat pieces but wow I was amazed how many you had!
Tee hee!
Hugs,
Barbara xx

That is a lot of kitties! I just love the poor kitty caught in the rain. The ones on your To Do list are very cute!

What a lot of lovely pieces. The October cat in the Nelson and Tibbs charts is very cute x

Ah, yes, the famous 'one day'! You do have some very lovely cat finishes. I hope Tigger will find his way back into your rotation some day :)

So many cats! I would have guessed I hadn't stitched any cats and I'll have to have a poke around, but I really don't think I have. Maybe one that's still a WIP?

I am not a cat person but remember I had liked those colourful cats too. AriadnefromGreece!

Aha, you're a cat lover at heart... the proof is in the stitching! So many adorable cats, those Purr-fect Pets are nice and colourful. I really like Nelson and Tibbs even though you haven't done them yet.