The idea of Dark October is to stitch on only Halloween projects for the whole month. I couldn't commit to that so had the idea of slowly stitching one or two small projects alongside my other planned projects.

However, plans can change and they certainly did, with some of my planned non-Halloween projects being swapped for Halloween ones, and some new starts being added in towards the end of the month.

In my previous Dark October post you saw the completed Chandelier and the progress I'd made on Trick or Treat: 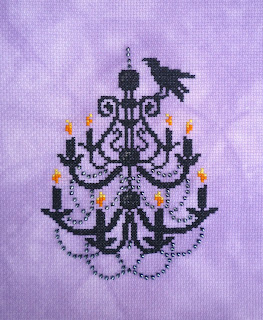 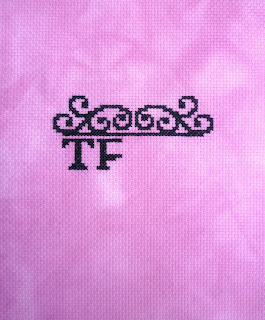 What you didn't see was that these were stitched alongside my Smalls SAL piece, RIP Spooky Hootie, and two Halloween WIPs, A Little Witch Of The Night and A Little Wizard Of The Night, which I swapped in and made some progress on. 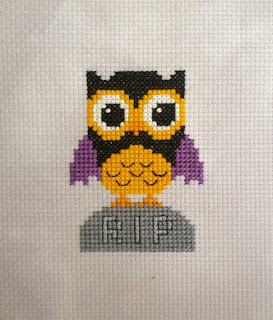 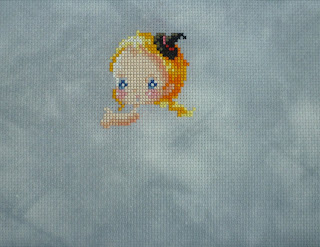 A Little Witch Of The Night
(continued her face) 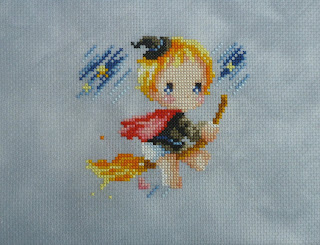 
Then, in the final week I went a bit berserk (well, berserk for me anyway).

I increased the time spent on Trick Or Treat each day so that it would be finished before the end of the month: 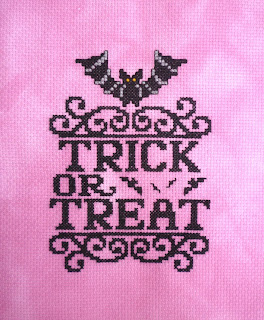 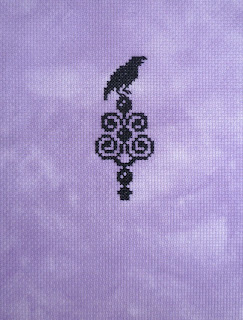 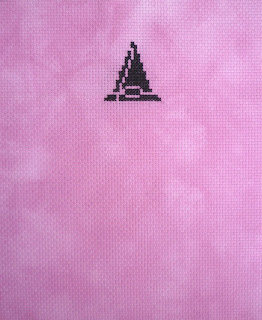 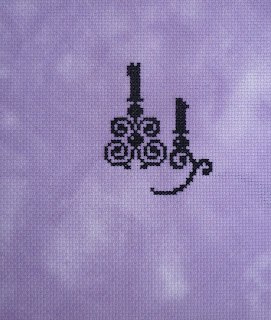 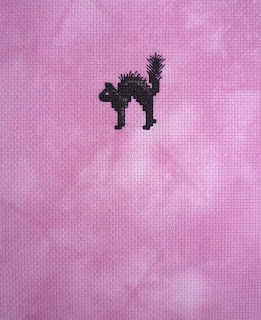 
And then I started yet another new piece, Haunted Library by Mill Hill, which you saw a few days ago: 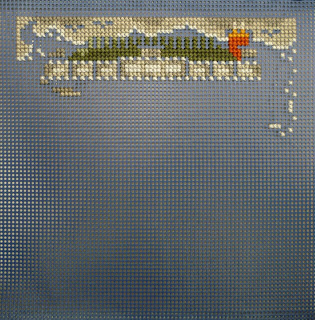 
I think all of the above means that, in the end, I actually made quite a good contribution to Dark October! In fact the only non-Halloween projects I stitched during the month were the Birthstone, the Monarch and Hogwarts. Not bad, considering I had originally planned on stitching just one or two of the Sue Hillis designs!

Next year I shall ensure there are no intrusions and that October is set aside for 100% Halloween stitching. I can't wait... 335 days and counting!

For now I'm going to try to continue stitching on the four remaining Sue Hillis projects a little each day. It would be nice to have them all finished by the end of the year.

By the way, does anyone know of any other similarly month-long themed challenges like this one? Christmas in July perhaps? I don't want to join them, just curious (although a month long Christmas in July does sound appealing; I might have to think about that!!)

I'm now looking forward to seeing what others have achieved during Dark October.

Fabulous Dark Work! I love those Sue Hillis designs and the fabrics you have chosen are lovely.

One of the Mirabilia groups is stitching Mer-vember - Mermaids in November. That could work for any designer of mermaids, not just Miras.

We used to do a SAL called Theme-a-licious which was fun, check out the labels on my blog for more information.

Love them all! I'm glad you went berserk and started them. They are all fantastic. Love the way they look so far. Lots of challenges are popping up right now for the new year. If you don't find something create it. I bet people will join. *cough cough* Like me haha.

So many wonderful Halloween pieces! Yay for wanting to finish the remaining Sue Hillis ones!

Oh, that's a lot of Halloween stitching that snuck into your rotation - love it!
I think there was a month long Teresa Wentzler SAL (also in October? I'm not sure), but that's the only one I can think of!

WOW you have been busy with Halloween! I love them all and can't decide which is my favorite piece. I do love the fact that you stitched them on such bright colors rather than the traditionala dark colors. The pink and purple look fantastic.

Congrats on getting so many stitched on!

You accomplished quite a bit of Dark October stitching and made some really nice choices. I'm looking forward to seeing everything finished by the end of the year.