Dark October is a stitching SAL which has been around for a few years. It was the brainchild of Michelle Cozyegg and Emily Eclectic Possessions (thanks, Jo, for pointing me in the right direction there) with the idea (I think) of stitching on just Halloween projects for the whole month, whether that be one project, a few projects, or even a new start every day.

I love the idea of Dark October but the format doesn't really fit in with my current stitching schedule. So I had two choices; either change most of my October schedule to make it 100% Dark October, or make Dark October work alongside my original plans. After much procrastination I chose the latter (although, as I'm writing this, I'm thinking if changing my mind again!) mainly because I thought knew the former would tempt me into one or two far too many new starts.

So now my October plan is as follows - stitch on the pieces I had planned to stitch on anyway, but for about 20-30 minutes each day work on one of these Dark Shadows projects by Sue Hillis Designs. That way I can do my planned stitching and participate in Dark October too, if only a little. 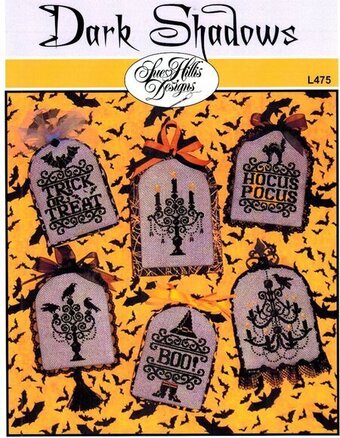 Here is yesterday's start. I think you should be able to tell which one I've chosen to stitch first. And if I finish this one then I will start another, and so on, until the end of the month. 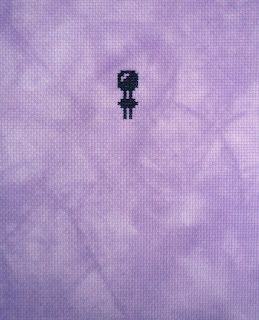 Stitched on 16ct Purple Potion by sewitall.com 2 over 1


There are going to be a few changes to the designs - to give them a bit of sparkle I'm substituting the charted blacks and greys with their closest Etoile counterparts, and for the chain-y bits on the candelabra and chandelier I have some silver-lined dark grey beads which I would really like to use. I don't know if they will work but it's worth a try so fingers crossed.

I would say wish me luck, but it's not exactly going to be the most difficult SAL in the world (except perhaps the putting-down-after-only-a-short-while bit!)

What a brilliant idea! I love this series of designs so I am really pleased you are stitching them.
I'm doing my daily stitch on a sampler and then using the Tiny Decisions app to choose between my two focus pieces.

I so love these design Rachel. Do they have quarter stitches?

Good choice, Rachel. I love that you're not doing the standard Halloween colors. Will they all be on the same fabric?

Great....yet another pattern that I've fallen in love with. These would just be so cute on my shelf....next year. Love your idea. Can't wait to watch these grow.

I love this one and that fabric is gorgeous. Hope you get in all the stitching you want, whichever way you end up going!

I hope to finish a Halloween design or two this year, but I'm not officially calling it Dark October or anything. I love your shadow designs, are you doing them all on the same fabric?

Oh those are so cool! Great idea, and I love that fabric as well.