A Monarch A Month - Edward III 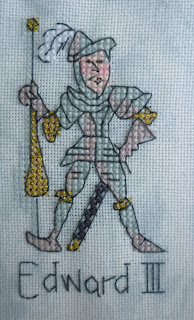 Here's my summary of Edward III's reign, whose appearance reflects his love of warfare.

14 year old Edward became king when his father was forced (by his mother and her lover, Roger) to abdicate. Edward soon banished his mother and had power-hungry regent Roger executed, leaving him King in his own right.

In 1337, Edward claimed he was also the rightful King of France and thus began the English/French Hundred Years War. After numerous conflicts, he finally renounced this claim in 1360 in return for French lands (which he subsequently lost!)

Scotland continued to be 'problematic'. Despite a truce in 1338, the next two decades witnessed fighting and negotiations as King David II failed to hold Scotland and England failed to successfully install Edward Balois as King. In 1356 Balois 'abdicated'. David returned as King in 1357.

In England, Parliament was developed into the House of Lords, for summoned nobles, and House of Commons to represent the people. The position of Speaker was created in the latter.

Edward also created the title of Duke for close family members (his sons were all made 1st Dukes of ...) and the Order of the Garter, possibly to represent the chivalry of Arthurian Knights of the Round Table.

The Black Death reached England in 1348, killing about one third of the population and two, possibly three, of Edward's children.

Edward had a good relationship with his sons, who often carried out military and political duties on his behalf, and a number of trusted advisers. Edward was a competent monarch but England's military might and Edward's reign definitely weakened as these advisers aged and/or died.

Edward died in 1377, one year after his eldest son, and was succeeded by his grandson, Richard.

Another fun King stitched. I always love the history lessons.

He looks good, how nice that he had the power to make Dukes of his sons!

Great work. Thanks for the history lesson.

This guy seems to be very fond of his wars - how fitting to picture him in full armor!
Somehow I never thought of the Black Death claiming the lives of nobles as well. It's always pictured as some kind of 'slum disease'.

Interesting guy. And wow, he banished his mother and executed Roger after they helped him become king! May I ask why one of his children did not become the Ruler but a nephew did instead?

ps... your link on the name Edward II comes back to this page.

Well, Isabella, that's why you don't betray your husband! The suit of armour looks great.