A Monarch A Month - Edward I

This is monarch number nine, the first of three successive Edwards: 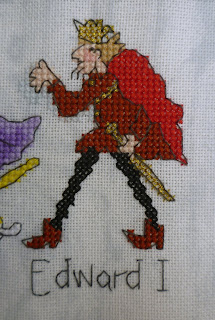 Here's a brief summary of Edward I and his reign. So much to say yet so few words allowed meant I have had to be very brief about most things, especially the conflicts in Wales and Scotland which are really interesting (well, to me anyway!) You'll also find a few words in inverted commas, primarily because I couldn't easily express their real meaning. I hope you understand what they're trying to convey.

Edward became king, whilst on Crusade in 1272, after the death of his father. He finally landed in England in 1274!

He was nicknamed Edward Longshanks due to his intimidating height of 6' 2" and, centuries later, 'Hammer of the Scots'.

He admired the legends of King Arthur and had a Round Table featuring the names of the knights made. This still hangs in Winchester Cathedral.

He married 13 year old Eleanor probably for political purposes, yet they were devoted and he was deeply affected by her death. His second marriage to the French King's sister was also political.

In 1295 Edward unwittingly 'created' the first 'House of Commons' by summoning 'commoners' (county knights and borough representatives) to parliament to assent to (rather than simply agree with) decisions made by his parliament of Lords.

By 1284 Edward had conquered Wales. He introduced English Laws, constructed numerous castles, and crowned his and Eleanor's final child Prince of Wales, all as statements of his power and intent.

In 1290, when Scotland had no direct heir, Edward became 'temporary custodian'. John Balliol was appointed King in 1292 but Edward continued to interfere in Scotland's affairs. In 1296 Edward successfully invaded, imprisoning John and proclaiming Scotland his.

In 1306 Robert the Bruce proclaimed himself and was crowned king of Scotland. Edward began retaliating but died in 1307 before Scotland's 'ownership' had been resolved.

He was succeeded by his only surviving son from his first marriage, Edward.

So next month, Edward II. I hope his reign is a bit easier to confine to 300 words!

And another monarch bites the dust!

Another great lesson. Thanks for sharing.

Oh my, she was only 13 when they married and had 16 children, kudos to HER!
Fine stitching for King Edward I!

Hey, I know that one, William Wallace against Edward Longshanks is the tutorial campaign in Age of Empires II! What an interesting and ambitious king.
How sad to think that he had so many children, yet so few of them survived him!

This will be fun having all the information about each monarch. Good luck with your stitching!

At first I was like wow he married a 13 year old but the realized he was only 15! Wow that is a lot of children! What a shame they all preceded him in death except the one son. I am sure the piece he had made and still hangs in the Cathedral is amazing to see. Thanks for sharing!

Another great resume of his reign! You didn't have space to mention how he conned the Welsh by promising them a Prince who didn't speak English. Then presented them with a baby!