A Monarch A Month - Henry III

This is number eight, Henry III, who marks the beginning of the second row of stitching. Seeing as how I am moving the monarchs around slightly, I spent absolutely ages counting and recounting and making sure his adjusted position was definitely correct before the first stitch went in. And then I counted again, just to be sure he was definitely in the right place. He is! 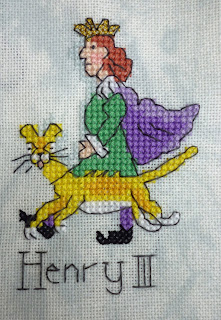 Note, Henry's walking a Leopard but the black spots will be beads so are not going to be added until the very end. Up until then it will have to look like he's walking a big yellow cat-thing!

So here we go with tiny snippets of Henry III's history. In the big scheme of English monarchs, Henry III is not well known but I find his life fascinating and 300 words is certainly not enough to do his life justice. Anyway, here goes:

Henry became king at the age of 9. His father had trusted him a guardian and 13 executors to oversee his early reign. By 1227 Henry had decided he would rule by himself.

He married 12-year-old Eleanor of Provence in 1236, probably as a strategic alliance. Yet he was a faithful husband and devoted father (certainly spending more time with his family than any previous monarch!)

Despite almost 200 years of 'English' monarchy, Henry's court remained French in both language and traditions.

Henry loved visiting and staying at his castles, and retained his father's menagerie in the Tower of London (hence the Leopard above).

Territory-wise Henry gained authority in Wales, maintained peace with Scotland (his daughter married the King's son), and gave Ireland to his own son. However, he had an on-off relationship with France, unsuccessfully invading twice to reclaim lands lost by his father but, at times, also making peace with and relying on the support of the King.

Henry gradually lost popularity due to inconsistent decisions and policies, such as heavy taxation and wasting money planning unfulfilled crusades.

After a small baronial coup d'etat, Henry was faced with The Second Baron's War, 1264-1267. Initial attempts at appeasement, by Henry agreeing to once again rule through his barons (1265 Provision of Oxford) soon failed and civil war ensued. Despite Henry being captured, freed, and surrendering, the rebels were eventually defeated, mostly by Henry's son, Edward, and his loyal royalist followers.

Henry died in 1272, whilst planning another pilgrimage. He is buried in Westminster Abbey, a building he adored and which had been heavily redesigned during his reign.

He was succeeded by his son, Edward.

So next month, Edward I.

I'm glad you clarified that's a leopard he's with, just a little big for a house cat.
He's sounds like an awesome king, and looks great stitched!

Very interesting. I can't believe that people become Rulers at suck a young age! Leopards for pets, WOW! Glad to see that he wasn't like his father though when it came to loyalty to his wife. Thanks for another great lesson.

I meant to ask, do they always rule until death?

That is very interesting, and he definitely lived longer than some!

I kind of want to say he's a cool guy because leopard (and also a King being a good father and husband was something else in these days), but can't get over the ickyness of an almost-30-year-old marrying a twelve year old...I know it was common back then, just doesn't feel right.

That was an interesting one. Nice to hear he was loyal to his young wife!

Isn't history amazing, things that were the norm then are unbelievable now....I'm sure they would be shocked at our lives now. Henry looks great, well done on resetting the design, can I ask why you did? I have changed designs before if they don't sit right .... my Marquoir years ago is prime example, I undid it half way, reset it and stitched it again!