A Monarch A Month - John

This is number seven, John. He's not John I as there's never been another John. Maybe one day there will be but until then he's just King John. 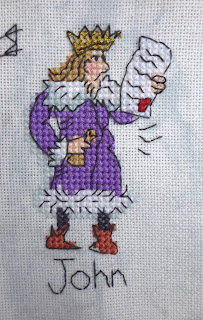 John marks the end of the top row. Next month, bearing in mind I'm moving them around a little, I'll probably be pulling my hair out trying to make sure the next set of monarchs are all in the right place!

In the meantime, it's History lesson time. John's life was exceptionally hard to summarise in under 300 words so I hope I've picked out some interesting points.

John became King following his brother's death. He was the fifth, the youngest and probably favourite son of Henry II.

In England John was relatively popular with the people but not so much with the barons, many of whom begrudged his implementation of harsher taxes. These barons and their rebel forces became a thorn in John's side throughout his reign.

In France John lost most of his family's lands and, whilst trying to regain them, was implicated in his cousin Arthur's disappearance/murder. Arthur was popular with the French, and their preferred choice of monarch, so his demise did nothing to steady already strained Anglo-French relations.

In 1209 John was excommunicated by the Pope regarding disagreements over the appointment of a new Archbishop of Canterbury. In 1213, and in return for financial compensation, John regained the Pope's support, the latter now excommunicating many of the rebellious barons instead.


The Magna Carta of 1215 sought to provide a truce between John and his enemies. It promised political, judicial and economic reforms in return for the rebel forces disbanding. A court of 25 barons would ensure John followed the terms.

John and the Pope both argued Magna Carta was illegal and, since neither John nor the rebels kept the conditions anyway, civil war ensued. John was initially the more successful but when the French supplied reinforcements to aid the rebels' cause, the result was stalemate.

John died in 1216 before the civil war could be resolved, the crown passing to his nine year old son, Henry.

So next month, how a monarch rules when so young, and what happened to the rebel forces...?

It's hard to believe there was only one John as it's such a common name. Congrats on keeping up with these.

Those monarchs are all great Rachel. How do you only stitch one a month.

You know, my Disney Robin Hood based knowledge of English monarchs gets totally overthrown here every month. The song is catchy, though!

Another great history lesson. Good luck figuring the counting out next month.

John looks great, the history of our monarchy is very interesting, isn't it

Such a common name to only have one of them. He certainly had a LOT of children with Isabella! Ten years and 14 children, whew. Funny how money can buy you favor; even with the church.

A nine year old ruler; I will be looking forward to that lesson.

Another fun finish, he certainly was busy... 12-14 illegitimate kids?!

He looks great! Can't wait for the rest :)

I absolutely had the same song Leonore wrote in my head from the Disney Robin Hood, clearly it was inaccurate as most of their movies are. Great finish!

Poor John was much maligned in the past! He was certainly fertile LOL. Unlike poor old Henry VIII

Wow John was quite the player!! Looking forward to how a 9 yr old coped with his reign. Great job stunner
xo Alicia