Those who know me will know that I am fairly good at sticking with my stitching plans for the year - for 2019 that being to focus on four main pieces - Parrot on Parade (finished), Green Halloween Banner (almost finished), Hogwarts (about half finished) and Haunted Library (not yet started), and only once had those four been completed would I start on my 'reserve list'.

However, there comes a time when plans have to change. You see, I'm really really really missing that 'new start' feeling so have decided to treat myself to a new start binge; enough to satisfy the itch without going OTT. This coincides with the fact that..... 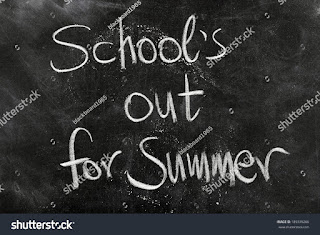 You see, I finish work tomorrow, Friday 19th July, and don't return again until Monday 2nd September. That's six weeks of school summer holiday. My original idea was to start a new project each week, giving me six new starts. Then I thought, if I started them at the weekends instead that's seven weekends so seven new starts and that's even better! So, as of Saturday for the next seven weekends I will be stitching exclusively on a new project. I'm calling this my Summer Of New Starts.

All of the starts are from this year's reserve list and none of them are biggies so although they'll be adding to my WIP pile it won't be by a stupid amount. I'd just about call that a win-win situation.

I won't tell you what my new starts are, but here are teasers of the seven projects I've chosen: 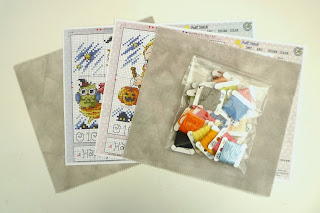 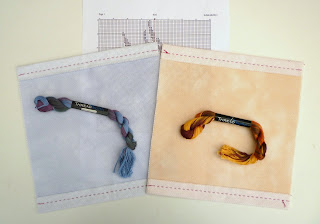 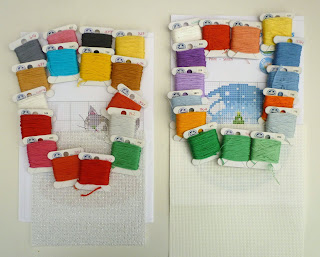 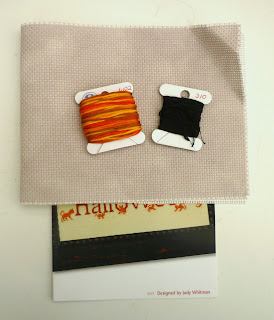 Do you recognise any of them and/or have a guess at what they might be?

I have no idea which order I'll start them in, I'll just see which one takes my fancy that particular weekend and post about it the following Monday.

As I really don't want these new starts to get just two days of attention and then be put aside for the rest of the year, I'm considering dedicating half term week plus perhaps the two weekends either side (26th October to 3rd November inclusive) to just these seven projects. It won't be a stitching marathon as such (unless I can convince my family to allow me a couple of days of solid stitching!) but rather a concerted effort to make good progress on them all and maybe even finish one or two.

So, I have seven new starts to look forward to and to incorporate into my other stitching. Woohoo! Roll on Saturday!!!

It sounds like you're starting your holidays off right!
I spy some cute patterns and I'm looking forward to seeing your Halloween with the kitties!

Ohhh I can tell you now the sneak peeks and how close our tastes are I will love them all. I see some Soda Stitch ones. I love those! I see some Halloween which of course I love. I'm in love with them all basically. I will be happily cheering you along.

What a fun idea Rachel. That was mean not showing us what they are. Looking forward to seeing each one. It makes me want to start something. I haven't started anything this year.

What a great idea! From what I can tell, you have some projects that I'd love to stitch, too. I'm looking forward to seeing if I'm right.

I know what the bottom one is! I have the chart too. It is SO cute and I really should get round to stitching it. Enjoy the new starts :)

Well what a tease you are! I do see some Halloween charts which include the Soda Stitch charts! A kitty and a Christmasy chart are coming up too! I just LOVE those two floss colors you have laid out there too. I think this is a great way to spend your vacation from work and I can't wait to see your first post about them!

Oh, I like what I'm reading (and seeing!) so far. They all don't look too big, so after working on them for a weekend each, you can probably finish them of with just one or two more slots in your rotation too, if you need a break from the bigger ones!

Great idea, and you did hold out quite well with your initial ideas, so you definitely deserve a few new starts. Very tricky with the sneak peeks!

This sounds like a great way to scratch that itch for new starts! I have also started a Just For Summer Holiday project but I aim to get it done within the six weeks.

I'm not one to criticise new starts otherwise I would spend my days scolding myself. Love your plan and it looks like it won't encroach too much on your current wip load. So GO FOR IT!! Wow envious of having a 6 week break. That alone is a celebration.
xo Alicia