This month's theme is finishing. I interpreted 'finishing' as meaning fully-finishing as opposed to finishing stitching. I don't know whether this is what was intended but that's what I'm going with!

I rubbed my hands with glee when I saw this topic come up as (if you're not already aware) it's a subject close to my heart.

A few years ago I had a forever-increasing Box Of Shame until someone asked me what was the point of stitching lots of projects if all I then did was hide them away? Thus began my feeling of guilt and subsequent challenge to fully-finish off the 50+ pieces in there at the time and to not add any more. As of this post, it's not quite empty but it's not far off.

Here's a breakdown of how my projects have been fully-finished:

As you can see, I generally go with framing or making ornies. I admit they're not the most inventive of ideas but they are the two techniques I'm comfortable with. I'm hoping to branch out in the future; I have a few ideas in mind, I've just got to stitch the right projects!

So, what to show for pictures regarding 'finishes'? I've selected a random few which feature at the top of their category:

The most expensive and the biggest finish was Angel of Autumn by Lavender and Lace. This cost over £70 back in 2004 but, after 227 hours of work and 27,727 stitches, was well worth it. 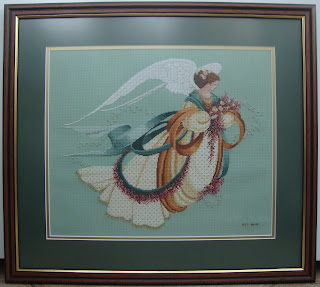 The most time consuming and most satisfying finish was definitely A Shower by Soda Stitch, fully-finished as a sickly-sweet mini pillow. Gathering and attaching the ribbon alone took 6 hours! 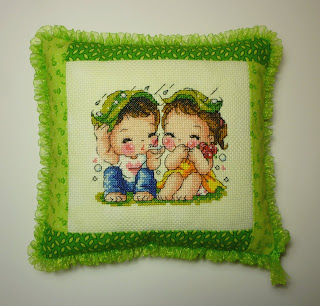 The most liked and (probably) my favourite is Owls In Love by FluffyFuzzypatterns on etsy. This went down a storm when I stitched it and received such positive comments after it had been framed. Sometimes everything just works together. 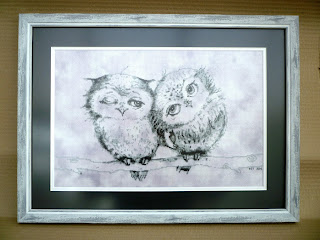 The most unique (for me) is Christmas Quacker by Dimensions. I used to do a lot of scrapbooking and, at one point, thought I might combine the two hobbies. It's only happened once so, at the moment, this little ducky is one of a kind. 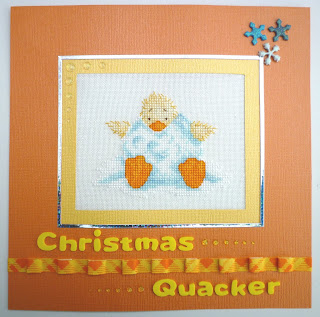 The smallest are After The Bath and Sparrow by Mouseloft. They are in little 2.5 inch plastic frames which were popular in the late 1990s for projects such as these. Unfortunately my FFOs have been put in a 'safe place' and I can't find them so here is a picture of the ones my mum stitched and inserted into fridge magnets, along with a picture of a spare frame for you to imagine what they would look like. Actually, I'm now beginning to wonder if this is the reason I can't find mine; because these are mine! Hmmm, I'll have to confront my mum about that!! 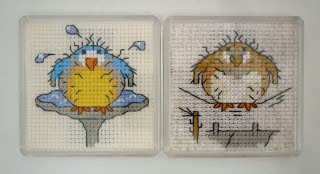 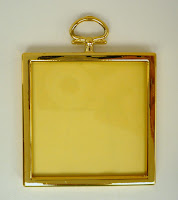 Finally, as a teaser, here are the raw materials for some finishing I will soon be attempting. I know what I want to do but wonder if reality will mirror the idea I have in mind. I'll find out soon.

Scroll down quickly, though, if you're of a nervous disposition as the scissors are a big clue as to what will be happening to this piece! 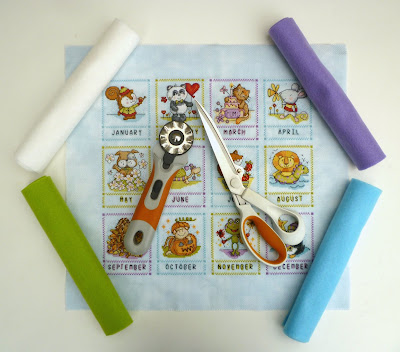 Now for a cheeky re-plug...

As I mentioned at the top of the post, finishing is a topic close to my heart which is why I started the Fully Finished Gallery SAL. It's an opportunity for everyone to dive into those drawers or boxes which store UFOs, pull out one (or two or three or more) and actually finish it/them off to proudly show to others. The SAL's only been running for five months but so far there have been almost 250 entries, many (most?) of which might otherwise have still been stored away instead of being on display.

The link-up for this SAL goes live on the 10th of each month and remains open for 10 days. There's a page at the top of my blog with all the information and links to previous months. Have a browse; there are loads of wonderful FFOs and inspiring finishing ideas in there.

But the FFG SAL has plenty of room for more participants! So come on, don't be afraid, pull out a UFO and come and join in. Wouldn't it be wonderful if the 500 mark could be reached by the end of the year?

Next month's topic is monochrome. I'm rubbing my hands together for that one too!

A great post, Rachel. I have a bunch of those plastic frames, but none of my finished projects are small enough. I'm really looking forward to see what you're planning for this month.

Great finishes! Your lavender and lace piece is really gorgeous!

Lovely finishes. Now that I see yours I realize I have some small fridge magnet finishes as well. AriadnefromGreece!

I figured you would make a great post about finishing and you sure did. Love your finishes. You're right the owl is just beautiful. I love them all though for different reasons. Can't wait to see what you do with your cute finished piece. I bet it will be beautiful indeed. I hope I have something new to contribute.

Thanks for taking part in The People's Choice this month.
You were absolutely correct in your interpretation of the theme. I knew this one would appeal to you!

I do wish you hadn't listed the types of finishes and numbers because now I want to do that for all mine. All 600 plus projects...

I can't believe you are going to cut up your calendar!! Hope it works out OK, looking forward to seeing that on the 10th this month.

The price for the L&L Piece is similar to what I used to pay pre-children. I used a city centre framer then. Now my small-town framer is half the price, despite being 20 years in the future LOL.

Oh, some lovely finishing you've done so far, I love the little pillow. I'm not sure if I'll be able to finish something new this month, there's just never enough time!

Beautiful finishes Rachel. I love them all. You do such an amazing job.

So many beautiful finishes! The Angel is gorgeous and A Shower is just adorable. Those owls are precious and that frame is perfect for it.
So glad you "found" your missing pieces, does your Mum know yet?!
Such a tease, I can't wait to see what you come up with.

A great post. It has really inspired me to FFO the Beauty and the Beast cross-stitch of mine that is tucked away somewhere