A Monarch A Month - Richard I

We're already up to monarch number 6, Richard I, and here he is as the crusader he is remembered as being: 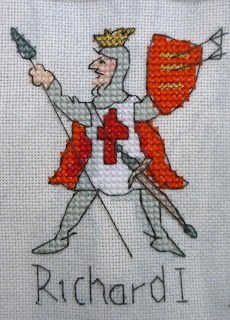 Richard became King following the death of his father. But he cared little for England or the crown, spending only 6 months of his reign in the country.

Richard was first and foremost a military man, venturing into numerous campaigns including many against family members, especially his father and brothers.

His most famous campaign was the Third Crusade, embarked on soon after becoming King, with the aim of ousting the Muslim, Saladin, from Jerusalem and returning the city to Christianity.

Some sources say this is when he became known as Richard the Lionheart; other sources say it had been his nickname for some years.

During this Third Crusade, Richard successfully occupied Sicily (releasing his Dowager Queen sister from imprisonment) conquered Cyprus, married Berengaria of Navarre (possibly as a strategic manoeuvre since Navarre bordered his family's beloved Aquitaine) but was unable to free Jerusalem from Saladin's rule.

After lengthy battles a truce was agreed, after which Richard set off for England. However, he was captured en route, imprisoned and held for ransom. The ransom was paid, Richard was freed but he never did reach England.

Richard died from a crossbow bolt wound whilst still in France. He was buried with his father in Fontevraud Abbey, although his (recently-discovered embalmed) heart was buried in Rouen.


He was succeeded by his last surviving brother John who, disgruntled at having not been left as regent during Richard's extended absence, was plotting to overthrow him anyway!

Richard left one long-lasting legacy; he was the first monarch to use the 'Three Lions' to represent England, a design still used to this day.


So there you have it, not the most nationalistic monarch England has ever had but still an interesting historical figure in his own right.

And because I'm six months into this project, I thought I'd show you my progress to date. I still have beads to add to shields, spurs and the letter i's but they won't be added until the very end. It's also a terribly difficult fabric to photograph correctly; it's a very pale grey background with hints of grey marbelling.

As a side note, there are still 4 more days left to link up to the FFG SAL if there are any more of you who have an FFO or more to show!

Congrats on another great finish on the monarchs Rachel. The piece looks great.

Another great history lesson. An interesting one too, he did so little for the country except drain it of money but is remembered with honour and pride. Funny people, the English!

He/they look great! I didn't know how the three lions came about, cool!
I might actually be able to post for the FFG SAL, we'll see.

Thanks for sharing the history. I'm enjoying learning along with your beautiful stitching. They look great so far!!

Well, this guy is a little disappointing. He was so majestic in the Robin Hood movie (the Disney one, of course...but then, I think he did return home in the end in that one). What's next, John being a total sweetheart? I'm preparing to be surprised!

I thought he cut a more interesting figure too. But I still love this era and loving our royal history adventures. They look great all together too.
xo Alicia