A Monarch A Month - Henry II

This energetic (hence the leapfrogging) monarch is a little later than planned this month as, when his time came, I didn't feel like stitching on him so found myself more than a bit distracted with my Halloween Banner. I did apologise to Henry for ignoring him and luckily he understood (had it been Henry VIII I might not be alive now to tell this tale!!) Also, his reign was extremely difficult to summarise into 300 words so that took a bit longer than expected too (so much fighting!) 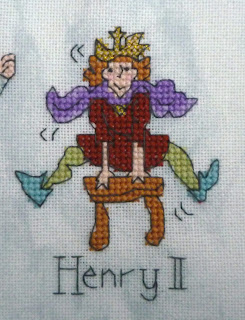 
I stitched his crown in metallic gold rather than the charted yellow (some monarchs have gold and others yellow crowns but I don't see why they all shouldn't be metallic gold) and will frog and adjust the ridiculous backstiching on his right leg by the time he's shown again in the Smalls SAL.

Now it's time for your History lesson about Henry II:

Henry became king upon his cousin Stephen's death, a deal agreed between Stephen and Henry's mother on condition she renounce her rightful claim to the throne. Although of Norman descent, by taking his mother's married name, Henry became the first Plantagenet monarch.

Henry was relatively successful at restoring England and the monarchy to his Grandfather's pre 'Anarchy' days, and introducing a more equal country-wide judicial system.

He ruled over territories in England, France, Wales and Ireland; the 'Angevin Empire'. However, there were numerous disputes over lands in France, leading to tense relationships with the French kings, and the brokering and breaking of many treaties.

Henry also had tense relationships with his surviving sons regarding their inheritances. His eldest was crowned 'Young Henry' and all were given various titles and lands but none were satisfied. Rivalries ensued, sometimes encouraged by Eleanor.

Henry is probably best remembered for the Thomas Beckett 'will no one rid me of this turbulent priest' murder. Beckett had been a close friend and ally but when made Archbishop of Canterbury his conflicting views made him a thorn in Henry's side. Henry was blamed for Beckett's infamous murder at the alter of Canterbury Cathedral.

Henry later believed that his mounting conflicts were a punishment for Beckett's murder so undertook a pilgrimage to pay vigil at the alter. This humble gesture brought most of his conflicts to a close and helped secure his throne.

Henry died in France in 1189 and was buried in Fontevraud Abbey where his wife would later be buried beside him. Young Henry and Geoffrey had died before their father, leaving Richard (and later John) to inherit the throne.

So next month King Richard I.

* Does anyone remember that this was the answer which won Judith Keppel £1million on UK's Who Wants To Be A Millionaire?

Congrats on another cute finish Rachel. I really enjoy your history lessons.

Henry is not acting like a monarch in this stitch, but I like it; he's cute. Late or not, you're doing a good job of keeping up with your monthly stitching.

Eleanor of Aquitaine is my 'name saint'! (I don't think she's actually a saint though. But my name day goes back to her still).
Also, that's really THE King Richard coming up next, isn't it? How exciting!

Seeing him leapfrogging made me smile! HENRY II sounds like he may have been doing a good job except for that pesky little murder!

Another cute one, although he looks like a bit of a trouble maker!

Another great history lesson and a funny monarch!

I notice you now link back to the previous monarch, great idea!

Your monarch a month post is always such fun - not just a design to see, but your mini history lesson as well. Henry II, Eleanor of Acquitaine - impossible for me to think of them without remembering The Lion in Winter (delightful movie). Henry sure seems to be having fun leap frogging that stool (bench?).

Loving your Monarch posts stunner, I'm glad it's going to last years so that we will be entertained for a while. Poor Henry he was doing so well until that inconvenient murder. Soooo looking forward to Richard. I'm reading a historical (fictional) novel about Richard and what follows after his death. I love this era.
xo Alicia