A Monarch A Month - Stephen

I am already 4 months in so here is the rather angry monarch number 4: 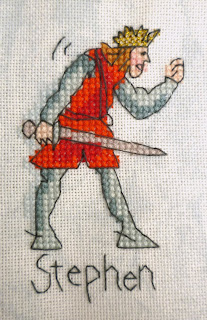 
For those who also like the little History lesson, here's a bit about Stephen's reign (which was exceptionally difficult to condense into 300 words!):

Stephen, a grandson of William I, was raised in his uncle Henry's court and became a popular, charismatic and generally likeable person (although, as King, lacked strong decisive leadership qualities).

Like the nobles of Henry's court, Stephen had sworn to support Henry's daughter Matilda as his successor. However, upon Henry's death, Stephen (supported by many who switched allegiance to him) claimed the crown, consolidating his position by granting land, titles and power to his supporters, and stripping assets from those loyal to Matilda.

Matilda was naturally angry at being usurped so, supported by her half brother Robert, began moves to claim her crown. Thus began 'The Anarchy', a civil war which blighted Stephen's reign.

Matilda was captured in 1139 but released unharmed. Stephen was captured in 1141, thus releasing the crown for Matilda. However Londoners disliked Matilda and prevented her entering the city for her coronation! Robert was then captured, and stalemate ensued until Robert and Stephen were released in a prisoner exchange.

Stephen was welcomed back and threats gradually petered out - Robert died in 1147, Matilda left England and died in 1151. Matilda's son, Henry, then aimed continued her cause.

Peace was finally achieved in 1153 when Stephen agreed to disinherit his own sons, Eustace and William, in favour of Henry becoming his successor, providing Henry supported him in the meantime. Eustace was angry (but died a short while later) whereas William agreed (and benefited greatly under Henry II).

Stephen, the last of the Norman Kings, died in 1154 and was buried at Faversham Abbey alongside his wife.

His successor, Henry II, became the first of many Plantagenets.

So next month, Henry II.

Another interesting history lesson. When do we get to see the whole piece? I remember you saying when you would share it but forget.

Congrats on another great stitch Rachel. I love your history lessons.

That was a very good summary. I often looked into King Stephen's reign and found it so convoluted to follow. I only had heard of it through Brother Cadfael mysteries :)

Thank you for the history lesson Rachel! I guess those in "power" have always been backstabbers and liars; what a shame. Would Matilda have been the first woman on the throne and do you think that is why they would not give her the title?

Ooh, that's the 'Pillars of the Earth' guy! I'm guessing the Matilda he was married too was not the same one he was fighting, though? (that would have been interesting!)

Great stitching and a great summary. I wonder if Faith has the right idea? English people may have been worried about her husband ruling through her too.