A Monarch A Month - Henry I

We are now on month number 3 so here is monarch number 3: 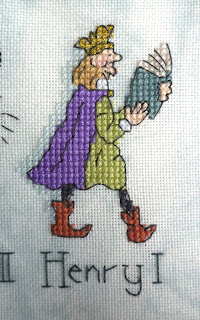 
For those who also liked the little History lesson, here are a few facts about Henry I:


Henry I became king following his bother's death in a hunting 'accident' in 1100.

Henry seemed to have been a fairly likeable King and was generally accepted by the English people.

He consolidated his power through the usual means of rewarding those loyal to him and punishing those not. But he also gained support and popularity by making his court 'cleaner' and less immoral than that of his brother, by backing religious reforms and seeking peace with the church, by imposing fairer taxes and judicial laws, and by forming a peaceful alliance with Scotland through his marriage to Edith (who later became Matilda) daughter of King Malcolm III of Scotland.

Just like William, Henry was the target of numerous rebellions from their eldest brother Robert who still saw himself as rightful King of England. Likewise, Robert's lands in Normandy were continually disputed by Henry who thought he should have them as well as England. Henry finally defeated Robert at the Battle of Tinchebray in 1106, imprisoning him until his death in 1134 and claiming 'guardianship' of Normandy.

Henry had a huge sexual appetite but his marriage to Matilda resulted in only two surviving legitimate children, Matilda and William. William drowned in the White Ship disaster of 1120 throwing the succession into doubt and prompting Henry to marry Adeliza in an attempt to father another legitimate son and heir. But their marriage remained childless.

Henry died in 1135, after feasting on lampreys, and was buried in Reading Abbey. He had named his daughter, Matilda, as his successor but his nephew Stephen, the son of his sister Adeliza, decided otherwise...

(Yes, there are lots of Williams, Matildas and Adelizas at this time. Hope you're not too confused!)

Nice to meet Henry I 🤴

thank you AGAIN for the lovely bit of history :D

Another great stitch Rachel. Are you sure you will be able to only stitch one a month? More fun history.

Great stitching and fun history. Thanks for sharing.

I was confused for a minute... his sister is his wife? Thank goodness that answer was no! But 20 illegitimate children; I guess he did have a huge sexual appetite.

Thank you for a little more history on the Monarchs. Looking forward to Stephen and how he stepped in over Matilda.

A great new history lesson and a great stitched monarch! Maybe you could link the Proceded/Succeeded in your info sheets to the other Monarch you stitched, you one could easily 'follow' them through your blog?

Love the stitching and history

Lovely stitching and history.Thanks for sharing.

Great work on Henry. I love Leonore's suggestion of linking the blog posts.
Adeliza is a name due for a revival, it's very pretty.