A Monarch A Month - William II

Monarch number 1 was posted quite late in January, but monarch number 2 has been posted at what I hope will become a more regular time each month. And here he is, shown just before he died: 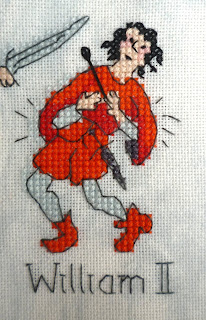 
For those who also liked the little History lesson, here are a few facts about William II, remembering that there is a 300 word limit.


William Rufus became King following his father's death in 1087. William I had divided his lands, leaving the Duchy of Normandy to his eldest son, Robert, and the Crown of England to his third (but second surviving and probably favourite) son, William.

William II was, by all accounts, a truly dislikeable person. He was a ruthless and tyrannical King and, like his father, did little or nothing to encompass the English language or way of life.

He was, however, a good soldier, quashing rebellions against him from those who wanted his brother Robert to be king, winning campaigns in northern France against Robert, and securing lands along the England/Scotland border against King Malcolm III of Scotland, whom he eventually defeated at the Battle of Alnwick in 1093. There was no doubt the throne of England was securely his.

Because he never took a wife, nor showed any interest in women, it has been widely speculated, although never proven, that he was homosexual, especially given that he kept a court of attractive and effeminate men around him. Critics argue he had taken a vow of chastity but his constant battles with the church throughout his reign somewhat dispel that argument.

William died in a hunting accident in the New Forest in 1100, being fatally wounded by an arrow fired by one of his retinue, Walter Tirel. His brother, Henry, was in that hunting party and, because of his lack of emotion at his death, and his race to London to be crowned King, there was widespread speculation, although no proof, that it was no 'accident'.

William II was thus succeeded by his youngest brother, Henry.

So, next month, Henry I.

On another note, thank you to everyone who has so far taken part in the Fully Finished Gallery SAL. There have been lots of busy fingers and some wonderful FFOs shown this month and, since the link will be open for another 4 days, it's still not too late to enter! If you haven't had a chance to look at some of the entries yet, please consider following a few of the links. Thank you.

Another great finish and history lesson Rachel. I do like those.

Interesting history lesson. He seemed to be just like his father. No wonder he was the favorite.

William II looks might fine, my DH is good at history but I struggle to remember who links to who - maybe I should stitch this too 😂

Congrats on having another king added. Another fun history lesson too.

I seriously LOVE THIS!! Cannot wait for next month's history lesson and another lovely monarch finish :D

Congrats on your little finish and I love how your giving us the history of the person that's so great. Happy stitching my friend

this is fabulous! I know almost nothing about the Kings and Queens!

What a fascinating project and a fun way to learn history! Have you seen the BBC series Monarchy? I watched it a few years ago and thought it was so interesting and this project reminds me of it!

Somehow, none of these monarchs seem to have been very likable characters. They make for fun stitching, though!

"And here he is, shown just before he died" LOL I like his hair! This is an interesting piece, look forward to watching in growing! I'd never have the patience to plan out four years of stitching though :)

Nice work and interesting history. My knowledge of the Royals derives from Jean Plaidy books and Horrible Histories!