A Monarch A Month - William I

Here's another new start for 2019 but one which will be an almost-four-year-long project. This is Kings and Queens by Bothy Threads, being stitched, as the title indicates, at the slow pace of one monarch each month.

I was hoping to have this stitched a lot earlier this month, but constant procrastination over the fabric caused quite a delay, as did having to re-grid the whole chart because I wanted to space out both the columns and rows more. And, of course, counting evenweave seems 10x more difficult than aida so the griding of the fabric (which I very rarely do) took an age too. No point starting until I was 100% certain I was in the right place!

Anyway, this is how the finished piece will eventually look... well... sort of as I have a few changes planned! 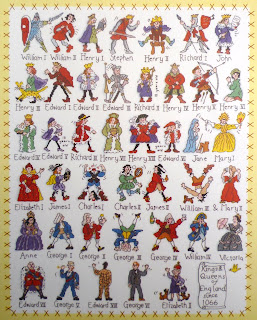 * the columns and rows will be spaced out a little more
* the backstitching and lettering (which will be tidied up in places) will be in 3799 dark grey instead of black
* seed beads (yet to be purchased) will replace the french knots (except for the eyes)
* a border will be added around the outside, hopefully to make it look like a scroll and probably stitched in a bluey-grey/grey variegated thread if I can find a suitable one
* the title will be moved to the top
* the space in the bottom right will have a list of the heirs to the throne as they stand in 2022


Here is my first monarch, but without the beads on the shield, his spurs and the i's of William: 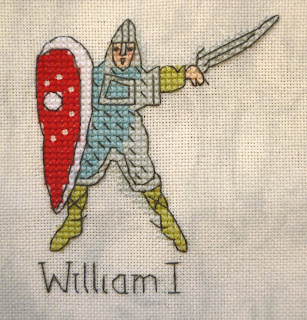 
But instead of just showing you the mini finish each month I thought I'd include some historical facts about each monarch along the way. It's not my intention to bore you or bombard you with information so I have given myself a 300 word limit (not easy for someone who talks a lot and has extensive knowledge of the monarchy!) Anyway, you can always skip this bit if the monarchy and/or British History are not your thing.


William, Duke of Normandy, became the first Norman king of a united England when he triumphed over King Harold at the Battle of Hastings in 1066. He was related to Harold’s predecessor, Edward the Confessor, so had a legitimate claim to the English throne. He had previously been promised the crown by Edward upon his death so when Harold (the mere son of an Earl) became king, William was not happy.

William spent his early reign consolidating his position and power by, for example, undertaking an extensive castle-building programme to help quash the numerous rebellions against him, replacing members of the English nobility with French nobles, and strategically marrying off his daughters.

He remained very French throughout his reign, learning little English, surrounding himself with French courtiers and customs, and spending long periods in France.

He was a keen hunter and created an area in the south of England, now known as the New Forest, as his personal hunting ground. His second son, Richard, was killed in a hunting accident there in 1075.

In 1086 William ordered a record be made of the landholdings in England. The resulting Domesday Book is still considered an important historical document.

William died in France in 1087, probably as result of a riding accident, and was buried in the Abbeye-aux-Hommes in Caen. His funeral was a hurried affair since, in attempting to squeeze his bloated body into the tomb, his guts burst and the resulting stench was extremely unpleasant!

William I was succeeded by his third son, William Rufus, whilst his first son, Robert, became Duke of Normandy.

If you read all that (299 words!) I hope you enjoyed the little history lesson!

I didn't enjoy history when I was in school but when I started homeschooling Jeremiah he LOVED history and I swear it rubbed off and I started enjoying it too. So this was interesting. Thanks for sharing the info behind the piece. I look forward to seeing your version of this pattern grow.

I completely agree with you about adjusting spacing and changing things around a bit! And yes, starting when you are 100% sure is better than ripping later.

I love this project you have going and the history lesson with it! PLEASE do more!

I love the idea of your changes -- you always seem to improve the charted project -- and I'm looking forward to watching your progress. Thanks also for the history lesson.

Thank you for the lesson! I will definitely be following the information you post on this as I am ashamed to say I know very little about the Monarchs.

William I looks great. Your changes sound good and I do hope they work out for you!

This will be a fun one to watch come together, you've got some great ideas!
And thanks for the history lesson - yes please, bury him quickly!

I love this design and the idea of a Monarch a Month plus the History lesson! I also love the idea of adding the names of the heirs to the throne at the end. Let's hope we still have our Queen so you don't have to design a Charles yourself!
We have a Norman Castle in Norwich and one of my stranger task was explaining to two Russian visitors why there is a French Castle in the heart of Norfolk. From memory, with no notice of the question and no notes or Google!

That's a great project - good luck with your stitching, It's great to learn about all the history too

Great work and oddly, I've been to Caen and there was a street named after him "Guillame" and maybe that was near the Abbey? It was in 1994, so I don't really remember for sure.

That's a super cool project and I thoroughly enjoyed the history lesson. Looking forward to 41 more of these!
Any idea why William is the first monarch featured in this design? Is it because of the 'First king to an united Enland' part?

Fabulous project and loved the history behind the monarch too. Just caught up with your posts and couldn't help but laugh over your amethyst little stitch trials. Hopefully next months birthstone with be kinder to you.

Yay I've always loved this one. I exchange beads for french knots too when the charts call for it. It will look really effective on Wills shield. I love your adaptations so I know this is going to look amazing.

So pleased you are stitching this chart. I started years ago and stitched up to Henry VIII. Now I shall stitch along with you. Thanks for giving me that push.