So here we are at the start of another year of Smalls SAL... but with a different host! Thank you, Mary, for taking over the reins and continuing to run this fun little SAL, and thank you, Heather, for nurturing it during its first four years. 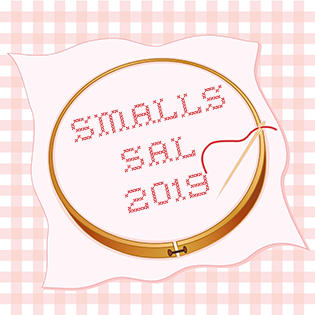 My January offering is a bit bigger than a project I would normally class as a small, but was still a quick-enough stitch to keep it within my 'how big is a small' parameters.

It was also another opportunity to break out some variegated threads to add a different dimension to the design. 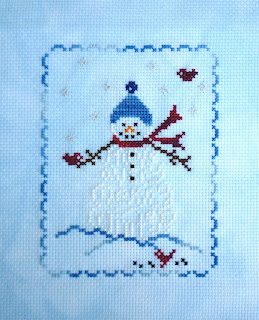 
I made a few changes, using Threadworx 1089 Bleeding Heart for the red, 1016 Crystal Blue for the blue and 10302 Reflections for the white. The black buttons and bird footprints (or are they seeds?) were stitched instead of using beads, and the hat was stitched in the variegated blue instead of the two blues suggested, although I did choose a dark blue for the bobble. Oh, and instead of using buttons, the snowflakes were stitched in the new Mouline Etolie blanc thread for a bit of sparkle.

It's not particularly clear but the writing for the body of the snowman says 'Have a very merry winter'. I did consider backstitching around it but then thought it would look wrong so didn't.

And, of course, he's been finished off, but not in my usual way! This is a new-for-me finishing technique and I have to say I'm very happy with it, especially since it can be made into a double-sided ornie if required (something I'm not intending to do, but you never know). 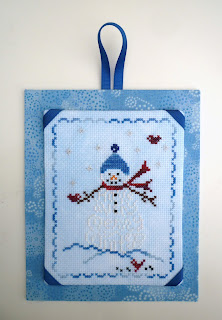 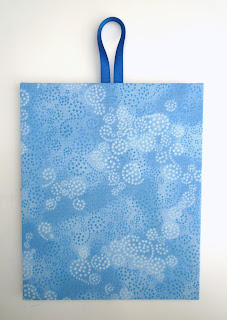 I have a second Small this month too, as I hope to have every month. The stitched piece has already appeared on my blog but now it's also been fully-finished, using the same technique as above. I don't think it looks quite as good but it'll do I suppose: 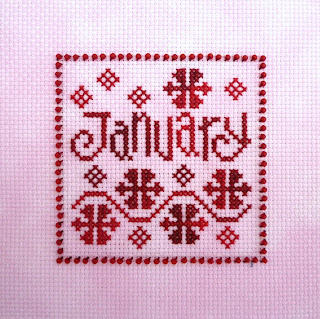 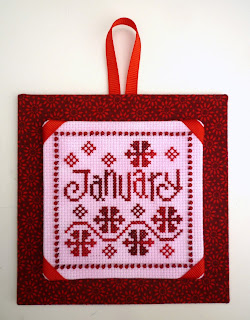 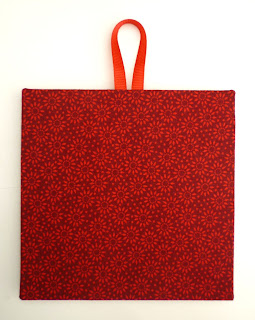 Birthstone of the month - January In Garnet


That's it for this month. See you for the February check-in.

Both of your stitches are fabulous and I really like how you finished them. I love your thread changes to the snow stitch. Enjoy your weekend!

Wohoo a new finish technique. Great job. I love how they both turned out. They look perfect to me.

Rachel! You and I stitched the same snowman! You have Excellent Taste! :) I like your snowflakes better than the suggested buttons I put on. I am going to copy you if that's ok and remove those buttons! They look too clunky to me! Anyway, your finishing is great! Your January small is very cute too! Thanks for joining the SAL!

Your smalls look great Rachel! I love your finishes too and how you put the ribbon on the corners of your stitches piece. Congrats!!

Both ornaments are so beautiful.

Congrats on the gorgeous finishes Rachel. I love your new finishing technique. Can you tell us how you did it?

Love that snowman, I could do with a little cooling off right now lol. Great finishes and happy stitching!!

Your small stitches are wonderful Rachel. I have done the little snowman and enjoyed stitching him. Love your finishes! RJ@stitchingfriendsforever

Your stitching are wonderful. The little snowman is very cute.
I like your finishes.
Happy Weekend, Manuela

I love your ornament finishes, the ribbon in the corners is so cute! I've never seen it before. Maybe you could do a quick tutorial in the future, for the SAL? I'm always looking for new ways to finish! I also really love the way your variegated border turned out on the snowman, very Wintery :)

That's a great finishing technique for the ornies, I really like the corner ribbons and how you can see the fabric unlike a pillow ornie.
I can see the writing in the snowman once you pointed it out!
BTW, the SAL started in 2013 as the Ornament SAL so Heather hosted for six years altogether. I know this because I've done every single one!

I love your new finishing technique and would also love to know how you did it. I also love the changes you made to the snowman.

I love both the designs. I am a January birthday girl and should really do a special month design for myself. I have the snowman pattern put away and I love the variegated edging you have done, very inspiring to start this. x

Great stitching and fabulous finishes! The fabric for both of them are great.

I love you pieces!!! I am struggling to find the fabric I need to do my finishes but I love how yours turned out.

Visiting from the SAL (my first time joining in).
Great stitching and I love your finishing! It was a good idea using the Étoile instead of buttons, very pretty.
Nice to see how the variegated thread looks too!
I’m struggling to finish quite a few pieces, in that I’d like to finish them but I need to know more about where to find acid free board. Oh, just off to google and see if that will help. Tee hee!
Once again, Rachel, great finishes and very inspiring too!
Barbara x

Lovely finishes :) I see you're already setting a fine example for your Fully Finished SAL!

Love both finishes and that's a very cute snowman, and finishing as well!