This month's theme is monochrome. Monochrome is usually interpreted as black and white, but it can also mean various hues of the same colour.

Looking through my all-telling spreadsheet, I've stitched quite a lot of pieces that would qualify as being monochrome. However, I am going to limit what I show here to just the sepia ones (which have that oldy-worldy look that really appeals to me) in the hope that some of the other pieces will come up in future categories such as birds, pets or TV/film (three ideas there for your list, Jo!)


Sepia Baby by Vervaco was stitched in 2004 as a birth sampler for my daughter. It was my original intention (famous last words) to flip the chart and stitch the reverse image for my son but I found a different birth record design for him so it never happened. I would quite happily stitch this again though... maybe if grandchildren appear one day! 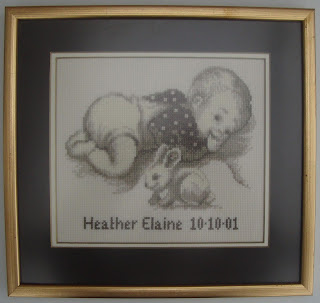 Heritage Crafts have produced a stunning series of sepia Silhouettes depicting quintessentially English scenes from years gone by. So far I have stitched three; Canal Crossing, The Lock and Milk Train. These are the type of project where the everything looks like a big smudge of colour until you take a step back. I have quite a few more in my collection, waiting for that elusive 'one day' to arrive! 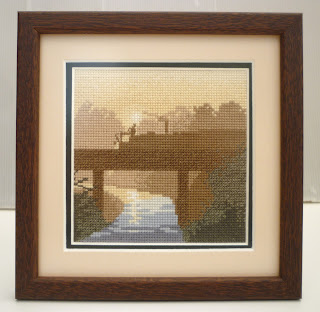 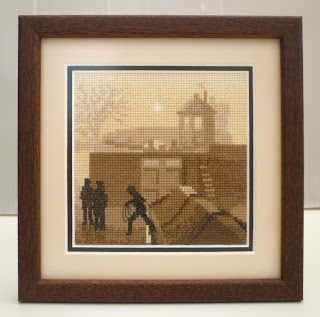 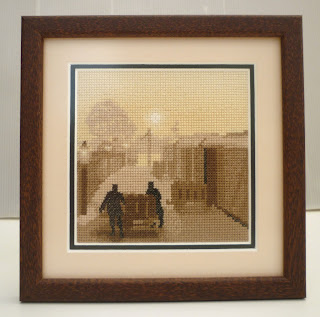 HAED's One by Zindy Nielsen (the mini version) was started way back in 2014 during my ridiculous HAED starting binge. It is perhaps the most likely HAED WIP I will finish as it contains only 31 colours and therefore not too much of that dreaded confetti. I really should make an effort to stitch on this again. 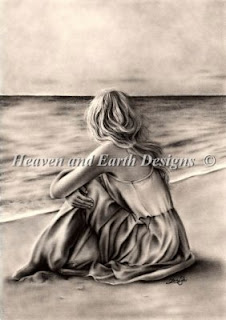 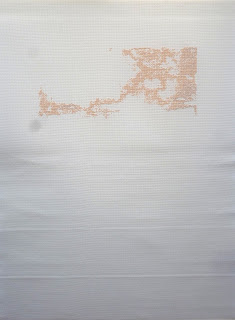 In my mind, where art is concerned, the king of monochome, as in black, greys and whites, is Escher. I love his optical illusions and could sit and look at them for hours. I think they would be a lot of fun to stitch, but they would have to be big otherwise a lot of the detail, and therefore the optical illusion effect would be lost.

Here are a couple of my favourites charted by who other than Heaven and Earth Designs. 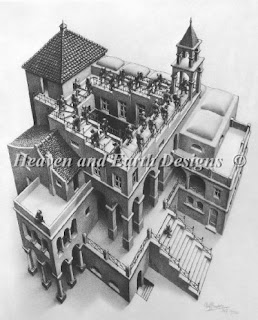 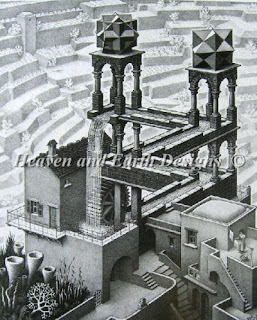 
And that's it from me this month. I'm hoping that my travels around the other participants in this SAL will result in seeing much more colourful monochrome projects, but I hope you liked my sepia ones; I do, but then that's why I stitched them!!

Next month is bees. That won't have me buzzing with so much excitement but see you there nonetheless!

You have some gorgeous pieces!

Thanks for taking part in The People's Choice this month. I love the muted sepia tones of the projects you chose.

I also love the randomness of the themes that everyone comes up with!

I love your daughter's birth sampler! It is so pretty. Coincidently Tia has the same middle name ;) I remember when you stitched the Heritage Crafts pieces; I love them!! I love the Escher pieces! His pieces always intrigue me as well.

Beautiful work. I love your sepia designs. Escher does really beautiful art. I agree you can stare at them for hours.

Love your pieces. Yes, get back to your HAED! I am working on Reptiles by HAED. It is so much fun.

I love your sepia landscapes - these tones are just so pretty!

All lovely finished pieces, I love the bit of colour in the Canal Crossing.
Only 31 colours? You need to start that up again!