Hogwarts In A Bottle - 90 hours

It's been a long time coming but I've finally finished another 10 hours on Hogwarts.

Here's a reminder of how it looked after 80 hours:: 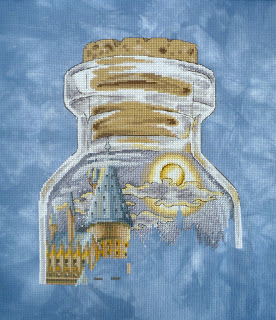 You saw a glimpse of some progress in the July #24 posting but here's the full progress at the 90 hour mark: 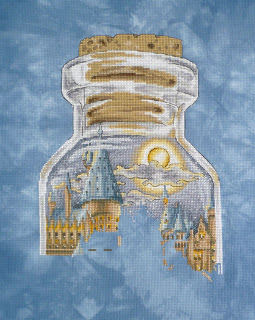 And the full piece: 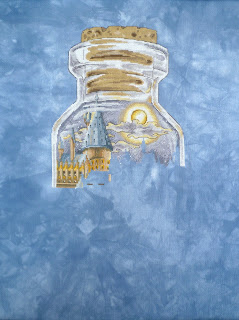 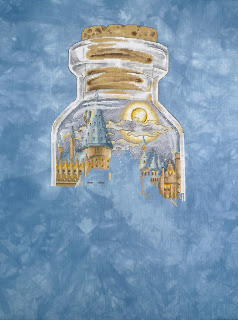 As you can see I stitched the beginning of the halls, towers and turrets on the right. Next time I'll be working towards the middle and hopefully joining up the two sides. I will probably wait until the buildings have been completed before adding more backstitching, but who knows?!

I've now revised how long I think this project will take to finish since more colour changes means the amount of stitching I'm achieving in each 10 hour stint has decreased. Another 35 hours have been added, which means I'm not even half way through after two-thirds of the year, so way behind schedule on that planned year end finish. There have been a few distractions, however, such as finishing Parrot on Parade and Green Halloween Banner, and starting a number of pieces over the summer, but I certainly don't consider those bad distractions.

I could push hard to finish it this year but I've calculated that, even if I make this my sole focus piece once my three beginning-of-the-month projects (Birthstone, Monarch, Smalls SAL) have been completed, it's still unlikely. Therefore if any of my recent new starts wriggle their way onto my frames I won't stress about it. Hogwarts is such an enjoyable piece to stitch that I don't think I'll ever want it to end anyway, and if the new starts do find themselves receiving attention then there may well be some more finishes in the meantime. I can't lose!!

So what will be on my frames next, I wonder? Hogwarts or one of the summer starts? I think I'll pick... that one... hehehe!

Labels: CutePatternsByMaria, Hogwarts In A Bottle

It looks great. The bottle looks like real glass.

Beautiful progress!! I understand about slower projects but like you said as long as you love the journey that's all that matters. Enjoy whatever you are working on!

Oh my... Hogwarts is looking incredible! What a delight this piece is!

(no, I haven't fallen off the face of the earth, just using all my time on house projects)

It looks amazing. There is so much detail stuffed into that bottle. LoL

Hogwarts is looking great! Even though you've been working on a lot of other stuff, I still feel like you are making tons of progress on this. And looking at the design, it'll probably go faster once the actual building is done. Still, no use stressing yourself out for a year end finish, just take you time and enjoy the process :)

Amazing progress. I think you are still making a lot of progress even though you are busy and feel you have slowed down. I find it interesting how you can estimate how many hours it will take

Looks like that was aa great 10 hours! I think that since your schedule is self made that it makes perfect sense to change it as needed. So many other things like new starts and family obligations jump in there to interrupt the schedule that most of the time we don't have any choice but to change it! However long it takes, I will enjoy seeing your progress.

This is looking stunning. I love all the buildings being added. It doesn't matter how long it takes as long as you are enjoying it.