This month's theme is Stitching Disasters.

I'm hoping, in the nicest sense, that this topic is relatively, if not completely, empty for everyone.

For me, I don't know if it's down to luck or care, but I can honestly say I've never had any stitching disasters.
I've never spilt anything, cut anything, damaged anything or had colours run when washing anything. All of my stitching has, thankfully, been very straight forward and non-dramatic.
Yes, I've had to restart a handful of projects after a few hours because I've chosen the wrong fabric or thread, but I wouldn't call them disasters.
I do admit to recently making a mistake cutting a project I'm FFOing, but it's retrievable, so even though it won't be FFOd quite how I wanted it, it's still not a disaster.
All in all, fortune has definitely been on my side for over 25 years.
But so as not to have a completely empty post, here's a disaster I would like to stitch, although it's currently about 1,759th on my to-stitch list! Along with many people I have a morbid fascination with Titanic, and this is my favourite chart, a now out-of-print kit by Dimensions called The Night To Remember: 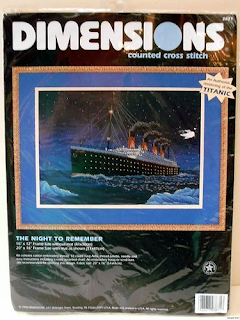 And that's it!
Next month's theme is Designer Of The Year. This could be approached from quite a few angles, so I'll have to decide which one.
Take care,
Rachel x
Posted by Rachel at 4:21 pm

I too am fascinated with the Titantic.

Thanks for taking part in The People's Choice this month.
I am glad that you haven't had any disasters! The Titanic is a great choice, my Mum enjoys a good disaster movie, we used to watch a lot when I was a child!

I’m so glad you haven’t had any serious stitching disasters!
Great idea to stitch one though!
Hugs,
Barbara xx

The Titanic is quite fascinating and in the movie I still think Rose could have saved Jack if she wanted to. I am glad you have never had a disaster and I hope you make it down to 1,759 in your pile providing you don't add any more to the beginning of that list! :)

Interesting! And I'm glad you've had good luck in general. I hope everyone else has as well.

I'm glad to hear you haven't had any disasters I think that's a great thing to celebrate. I had a lady spill her drink into my stitching bag. Nothing got ruined though. I keep everything in separate bags so nothing got hit. I also had a drink explode in our van on the way home one year. Again nothing was ruined. I'm glad I'm OCD about getting things in envelopes and stuff haha.

Hah, great interpretation of the theme - I'm glad you haven't had any real distasters to deal with. I figure all of this years 'stay home' or 'toilat paper ran out' type of charts would fall into the same category!