A Monarch A Month - Elizabeth I

Hi all!
Time for another monarch, number 24, Elizabeth I.
Here she is, with her trademark red hair: 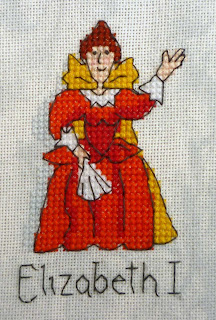 ELIZABETH I
Preceded by Mary I (half sister)
Succeeded by James I (first cousin twice removed)
Lived - 1533-1603
Reigned - 1558-1603
No marriage, no children
Elizabeth became Queen following the death of her half-sister, Mary. She was the third and final of Henry VIII's children to reign, and the last of the Tudor dynasty.
She was extremely well-educated, fluent in many languages, and a Protestant, meaning that once Queen England returned to Protestantism.
Elizabeth chose not to marry, recognising that a husband might undermine her power and status. Her good friend Robert Dudley might have won her hand had his first wife not died in 'suspicious circumstances'.
There were numerous plots against Elizabeth's life, the most famous being the Babington Plot which implicated her cousin Mary Queen of Scots, and resulted in Mary's execution.
Elizabeth was not really interested in foreign campaigns, so various ventures in Ireland, France and Russia more or less failed.
However, a rousing speech to her troops at Tilbury, plus good fortune with the weather, led to the defeat of the Spanish Armada in 1588 (although what's rarely mentioned is the humiliating defeat suffered by the English fleet in Spain the following year!)
During the 1590s, Elizabeth's popularity began to fade; her new Privy Council failed to make decisions which benefitted the country, the economy was in decline, and, with the loss of a lot of her long-term allies, including her most trusted senior advisor William Cecil, Elizabeth's own authority was decreasing.
Elizabeth's health declined in 1602 and she died the following year. She is buried in Westminster Abbey alongside her half sister Mary I.
With no direct heir, and Elizabeth refusing to name one, secret negotiations had begun prior to her death to prepare James VI of Scotland to become James I of England.
So next month, the first of the Stuart monarchs, James I of England.
Take care,
Rachel x
Posted by Rachel at 9:59 pm

Great finish on a great Queen

A woman before here time when it came to marriage!

A great finish Rachel and fascinating to read the history.
Elizabeth I was an amazing woman, no wonder there are so many stories written around her!
I look forward to the next lesson!
Hugs,
Barbara xx

She sounds a little boring compared to some of her predecessors, but she does look very regal!

A very interesting read again. Very little of the full story seems to show up in the movies. And can you guess my favourite portrayal of her? ;)

Another great lesson. Thanks for sharing.

She looks so nice and colourful!

No mention of Blackadder? She did amazingly well to survive into old age and keep both her throne and her head!