Hi all!
Back in 2015 I started 59 projects during the first 59 days of the year in what was named Debbie's Super Duper Ultimate Crazy January February Challenge.
Up to now I've finished 35 of those projects - 17 in 2015, 9 in 2017 and 9 in 2018.
This year's to-finish list contained a further six but, mainly due to a lot of new-startitus, my good intentions haven't quite gone to plan - at almost the end of the year I've only just finished the first one!
Here's how I last left it: 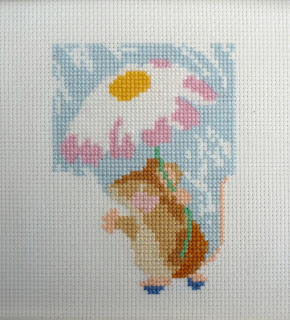 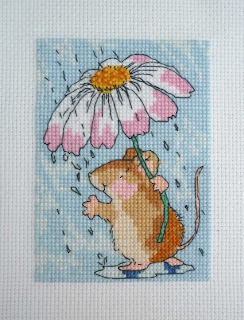 Daisy Umbrella (my title) by Margaret Sherry
Stitch count - 45 wide by 62 high
Stitched on 16ct white aida
Started - 21st January 2015
Finished - 4th December 2020
Total stitching time - 22 hours 40 minutes
I remember that this was one of my first Margaret Sherry designs, and I regretted using aida because of the fractionals. But it wasn't too bad in the end. The backstitching - all three hours of it - was probably more frustrating as it involved lots of thread splitting. But, again, it wasn't impossible, and well worth it for the effect.
The centre of the daisy was charted for french knots but I used beads because I don't like doing french knots!
I know exactly how this will be FFOd, so it will hopefully be ready for the 10th.
Wonder how long it will be before I finish another from this ages-ago Challenge?!
Take care,
Rachel x
Posted by Rachel at 10:18 am

That's a really cute mouse and it's amazing how much different a project looks once it's been backstitched.

What an adorable little Mouse! I do like Margaret Sherry's designs. I did the standard 31 projects, I ought to check how many I finished!

That's a lovely finish, looking forward to seeing your FF

She is adorable! Congrats on your finish!

Great to cross at least one off, and you never know about a second one, but December is busy, even with the current situation.

Aw, this one's so cute! Well done, and congrats on slowly working away on finishing all these challenge starts.