A Monarch A Month - Henry V

After having missed February's post I'm now a month behind with my Monarch Of The Month. Not that it matters - it's not a SAL and I'm not stitching to a deadline - it's just upset the tidiness! There might be an opportunity later in the year to catch up, otherwise I'll just write February off as a missing month.

So this is monarch number fourteen, Henry V: 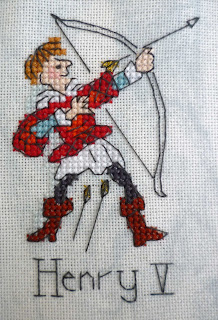 Here's my summary of  Henry V's reign. For those of you who like Shakespeare you may be familiar with him from various plays, but here's my version.

Henry had been acknowledged as a competent heir and began his reign by righting the wrongs of his predecessors, including honourably re-interring the deposed Richard II and restoring lands and titles to many who had been disinherited.

He was the first monarch to (finally!) write in English and legalise English as the language of Parliament.

His only real domestic threat was the 1415 Southampton Plot in which the supporters of Richard II's son, Edmund Mortimer, aimed to put him on the throne. Whilst Edmund was certainly more senior in the line of succession, he wanted no part in the plot; in fact it was Edmund himself who informed Henry of the threat. The traitors were dealt with but Edmund was pardoned and became one of Henry's most loyal and trusted advisers [one sceptically suspects he cleverly saw the perils associated with being King and was happier to stay on the sidelines!]

Regarding France, Henry aimed to unite England and France under one monarch - him! - thus re-igniting the English claim to the French throne, the Hundred Years' War, and the renewed invasion of France.

In 1415 Henry won the famous Battle of Agincourt where, despite being exhausted and heavily outnumbered, his troops decisively defeated the French. At the end of the Battle, Henry showed no mercy and, uncharacteristically, ordered the execution of all prisoners.

On finally reaching Paris in 1420, the Treaty of Troyes was negotiated whereby Henry was recognised as heir apparent to the ailing French King Charles VI.

But Henry never became King of France, dying in 1422, just months before Charles VI, and leaving a new wife and young child. He is buried in Westminster Abbey.

So next month, Henry VI, who inherited the throne of England and became heir apparent to the throne of France at just nine months old.

Another fun post Rachel. I really enjoy reading them.

Congratulations on getting back on track with these!

Hello Henry V, he's one of my favourite kings. We visited Agincourt once when on holiday.

Glad to see you had time for another monarch. Thanks for the lesson.

Nice to see the History Lesson continuing. He seems like a pretty good King. What did he die of, so relatively young?

I wasn't sure if I knew him (never having read much Shakespeare), but the Battle of Agincourt was talked about in one of my favourite book series, so I knew at least a little!

Ah, so we have him to thank for making English official! And he looks very active too.

A King with a conscious!?! I would think that restoring everything was not a popular choice with many. BUt then to die so young with such a young baby. Thanks for the history lesson.

What a great account, it's so interesting to get back into the monarchs. Well stitched as always too. :)