A Monarch A Month - Henry IV

So I'm now in to year 2 of 4 of stitching Bothy Thread's Kings and Queens at the slow pace of one monarch per month. How the last year has flown! 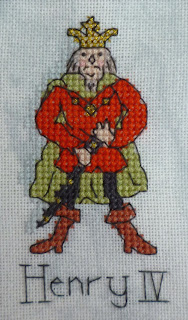 Here's my summary of  Henry IV's reign. Little seems to have been written about him, suggesting he wasn't one of the more interesting monarchs. Perhaps Shakespeare's Henry IV (parts 1 and 2) might tell you more but I'm not going down that route!

Following a successful uprising by Henry against his cousin, Richard II, Parliament declared Richard a tyrant and Henry King.

England finally had their first monarch since the 1066 Norman Conquest whose first language was English rather than French!

Henry was also the first Lancastrian monarch which, unwittingly, initiated The Wars Of The Roses (note 1).

With rumours abundant that Richard was still alive, Henry spent much of his reign fighting off similar rebellions to that which had put him on the throne.

One of the biggest threats was from the self-proclaimed Prince of Wales, Owain Glyndwr. His rebellions were unsuccessful, but events escalated after Henry's cousin (and potential claimant to the throne) Edmund Mortimer was captured in 1402.

Henry wasn't really bothered by this, but Edmund's ally, Henry Hotspur was. With Welsh and Scottish support, Hotspur rebelled against Henry, culminating in the 1403 Battle of Shrewsbury, where Hotspur was killed.

Henry had Battlefield Church built to remember the thousands who had died that day.

In his last few years Henry suffered bouts of illness. As a result, he allowed his son a limited regency.

Henry's crown was beside him on his deathbed in 1413 and it is said that, when it was thought he had died, Prince Henry took the crown, only to be reprimanded by his still-alive father for being too eager!

Henry is buried in Canterbury Cathedral beside his second wife.

So next month, Henry V.

Note 1 - It was the question of the male-only line of succession from Edward III which was responsible for The Wars Of The Roses - the Lancastrians (Henry IV, Henry V and Henry VI descended from Edward III's third surviving son) took the male-only line of succession, whilst the Yorkists (Edward IV, Edward V and Richard III descended from Edward III's second surviving son but via a female descendant) did not. It was not until the succession of Henry VII in 1485 that the Lancastrians and Yorks were united (as far as warring families can be united!) under the Tudor dynasty.

Great little finish, and nice to be well into the project. I love all the info, it's things my mother learned in school in Canada, but I never did. She knew the old poem to remember the monarchs as well.

Thanks for this month's history lesson. Glad you finished him up. Onto the next project.

Great stitching and history lesson. I didn't do those particular plays and we did The Industrial Revolution for History so The War of the Roses is a bit of a blank in my education!
I like the story of the succession. It's something I can imagine our Queen doing too LOL

Thanks for the information about Henry IV. It always amazes me how their own family members overtake them in order to be the newest Monarch; but I guess greed anad power does that to a person. Looking forward to the next Monarch.

I love history esp Tudor stuff even though I always forget it! Love your finish. x

You're well underway with this project now :) Seems like we will see a lot of Henrys. And a lot of rebelling. I'm curious to see at what time the political situation becomes a little more stable, but I'm guessing that won't happen until the monarchy becomes constitutional and there is less power at stake.

Thank you as always for the history lesson; it's good to expand my knowledge of Kings and Queens beyond the Tudors! I still love your restraint at doing one a month x