This month's theme is Lizzie Kate.

When it comes to a single designer I think we generally tend to either like or dislike their work. I'm a bit polar with Lizzie Kate; I'm drawn to some of her earlier designs but none of her later ones which became a bit more 'sample-like' if you know what I mean.

I do, however, like the fact she has designed lots of sets, and that's what I've been most attracted to.

The monthly Flip-It stamps, stitched in 2015, were my first foray into the world of Lizzie Kate and totally enjoyable to stitch. I altered the November design from a pheasant to a poppy to make it more suitable for the UK. 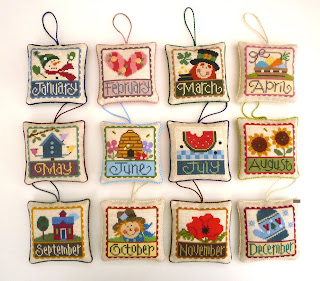 The Green series charts were stitched in 2016. I can't say I really enjoyed stitching these so don't find the end results anything more than 'OK'. 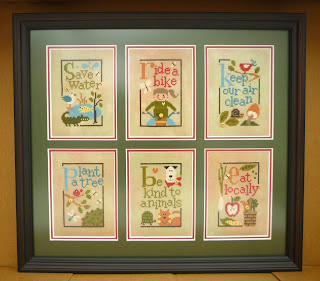 A few Tiny Tidings were also stitched in 2016 as Smalls SAL pieces. These were also the first ornie FFOs I made. I'd really like to improve on them, filling them with stuffing rather than wadding and swapping out the ribbon hangers, but I don't know if I want to spend time doing that. They're not 'right' but they don't look too bad as they are. 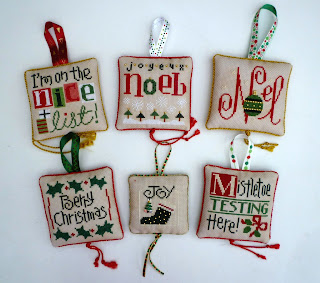 These four Seasonal Alphabets were stitched between 2016 and 2018. They were definitely fun to work on and easy on the mind, with each little motif being a psychological mini finish. I'm glad, from the fabrics and frames, it's obvious to work out which season is which! 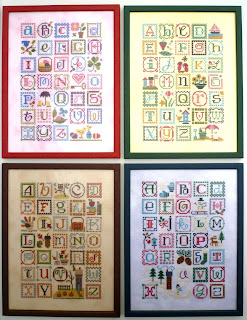 Also stitched in 2016 (2016 was definitely a LK year!) were a couple of little Boo! Club Halloween pieces. I don't have the others in the series so can't complete the set; probably a good thing! 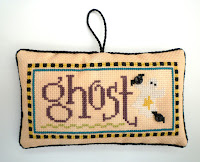 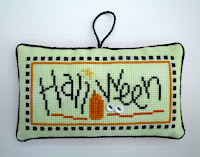 In terms of stash, I have another three monthly sets, plus a few annual Santas and various Tiny Tidings charts. Top priority, though, is this set, Christmas By The Letter, which I would love to be on my 2021 list: 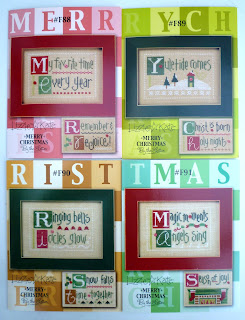 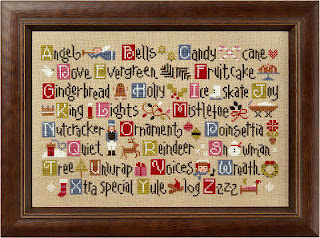 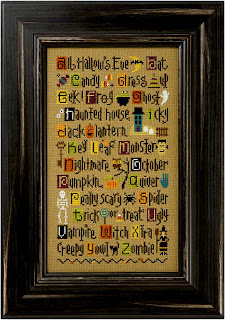 I almost forgot... I won this LK One Hundred Years chart in a giveaway from Clare at Aimetu's Stitching a few months ago. I had every intention of stitching it this year but forgot about it until this post. How very rude of me (sorry, Clare). So somehow this needs to be added into my 2020 stitching plans.

And that's it for Lizzie Kate. With so many designs available, I'm sure there will be lots of different ones on other posts.

Next month, the people have chosen penguins.

Nice idea for a themed SAL. I'll look into it x

I love the flip it stamps and tiny tidings. I had never heard of Lizzie Kate before I started blogging; I feel that very soon I will need to stitch a design of hers as there are so many I like! x

You have a lovely collection of Lizzie Kate stitching!
Happy New Year to you and yours,
Barbara x

Great post. Lots of beautiful pieces. I've seen the One Hundred one before but forgot about it. Love the meaning. Definitely true. The Christmas by the Letter is very cool too. Thanks for sharing!

Thanks for taking part in The People's Choice this month. We definitely feel the same way about L*K. You've chosen some great designs from their catalogue.
I like the Christmas and Hallowe'en Alphabets.

Great finishes! I agree on the sampler like-ness of the later LK designs as well.

I agree with you on Lizzie Kate's style changes. You've stitched quite a few lovely ones though.

I am a sucker for most of LK's earlier charts and have quite a few in my stash. I stopped collecting all of them though when her style changed. I stitched that 100 years chart for Jacob's Kindergarten teacher and she darn near cried when we gave it to her. All your finishes look great!!!

Wow, you've stitched quite a bit of Lizzie Kate! I love them! They are so cute!

L*K has a lot of great designs...some I really really like and want to stitch, some I don't like that much (although for me, the ones I like most are usually the sayings/sentiments). Probably a good thing too, she has so many charts it would be near impossible to stitch all of them! Love the ones you've done.

So many wonderfully finished pieces! I've though about stitching some of yours, but have yet to do so. I like the Christmas and Halloween too!