A Monarch A Month - Richard II 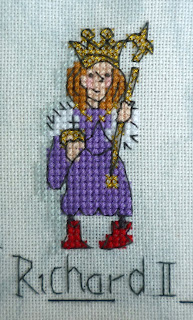 Interestingly, I think I found the picture on which this design was based. It was apparently the first portrait of a monarch to be officially commissioned. 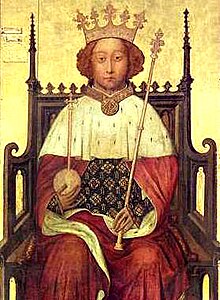 And as it's been another six months, here's the full piece so far. 12 down, 32 to go! It also shows the marbled fabric really clearly.

So, here's my summary of  Richard II's reign.

Ten year old Richard became king in 1367 when his grandfather died, his father having predeceased him.

Richard's paternal uncles were excluded from the Regency Councils as they were considered a threat to his crown (Edmund wasn't but John and Thomas certainly were).

Richard imposed heavy taxes on the population, but with nothing to show for their money (alongside other issues) the peasants' restlessness led to the 1381 Peasants Revolt. After negotiations, Richard agreed to the peasants' terms. Some incursions continued but not for long. In order to gain the peasants' loyalty, Richard later reduced their taxation.

Richard mistrusted many of the nobles, preferring to rely instead on the counsel of a few close ennobled friends. This annoyed the 'real' nobles who were used to being influential. Led by Richard's uncles, John and Thomas, and known as the Lords Appellant, these disgruntled nobles took control in 1389. Many of Richard's friends were charged with treason and fled or were executed.

But the Lords Appellant were short-lived. Richard gradually took back control, reconciling with and/or tolerating them as his reign continued.

Then, in 1397, Richard suddenly changed tactic and had most of them exiled or executed. Within a few months Richard had more or less made himself absolute monarch.

With questions being raised over Richard's fitness to be King, Henry Bolingbroke, Richard's cousin, declared himself king in 1399. Richard peacefully handed over his crown but Henry still considered him a threat. Richard was imprisoned and died from starvation a few months later.

Originally buried in King's Langley Priory, Richard was re-interred in 1413 alongside his first wife in Westminster Abbey.

So next month, Henry IV.


It's worth mentioning here that Henry Bolingbroke did have a direct claim to the throne, being either first or second in line, depending on whether or not his cousin Philippa's grandson, Edmund, was considered heir presumptive, as he was descended through his mother not his father, and being descended through the male line was everything.

Oh, the complications of inheritance!!!

Congratulations on finishing the first quarter of this project! It's definitely looking good!

Another monarch done and another great history lesson Rachel.

You'll have to change your intro soon - only three years left now!

This Richard sounds like a bit of an oddball of a king from the short description. So sad for a former king to starve in prison, though.

That was an interesting reign! A quarter of the way through already. Really enjoying the progress and the History lessons too.

Love the overall look of the piece. Another great history lesson. Thanks for sharing.

The marbled fabric looks so effective! Thanks as always for the history lesson x

Nice finish, but his SECOND wife was SIX when they married?! What?!