December In Turquoise - started and finished!

At the beginning of each month I will be stitching a little calendar piece, by Palkolp, in that month's birthstone colour. This idea was inspired by Jo's People's Choice SAL Birthstone posting and from her link to a website about birthstones.

December is the final month and the last time you will have to endure these little poems based around birthstones. Many of them have been quite negative but at least December ends on a more cheery note!

If cold December gave you birth
The month of snow and ice and mirth
Place on your hand a turquoise blue
Success will bless whate'er you do.

Visit here if you would like to read little interesting snippets of information about turquoise.

And here's the stitched piece. It's a little bit darker than I would have liked, but brings out the darker brown stripes which often appear in turquoise gemstones: 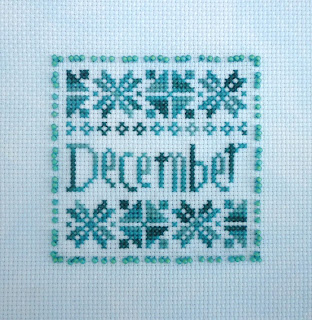 And so comes to an end my year of birthstones. It's hard to believe a year has gone by!

I was conversing with another blogger about how stitching a similar design every month started to become a bit of a struggle around August/September time, and she gets the same sort of feeling. Don't get me wrong, I really enjoyed stitching each one, but I had a similar problem when I stitched Durene Jones' Cute Animal Calendar back in 2017 and the LK Stamps in 2015. I have a few more annual sets I would like to stitch but probably not as year long pieces. Instead I'll just pick up a random month as and when I feel like it. Having said that though, do you see the same pattern as me... 2015, 2017, 2019... perhaps in 2021 I'll change my mind!

That was really a great series Rachel. Congrats on getting them all done.

Congratulations on finishing the whole series. I love the turquoise!

Sounds like someone actually put some thought into that December poem! It's a very pretty colour.

I can see how stitching 'the same' design every month can get you tired out, even if they are all very pretty by themselves.

I love the way they each turned out. I will miss them and yet I agree with you....it will be nice to move on to something else. I'm still working away on Mom's monthly piece. Been busy with decoration so it's not been a fast stitch this month.

Well they all turned out great! Congrats on the finished series. Hope you can find something interesting for you to stitch in 2020 so you don't have to wait until 2021!

Congratulations on another Happy Dance! I would have a break next year and then do another series in the odd numbered years!
This year I chose four Dragon Dreams and four Sweetheart Trees for my Christmas Ornie SAL, that was a nice way to stitch a mini series.