A Monarch A Month - Mary I

Hi all!
Back to one monarch this month, and it's number 23, Mary I.
Here she is, looking resplendent as she (presumably) celebrates the burning of Protestants: 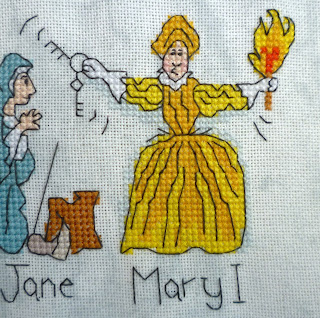 Mary was the eldest of Henry VIII's three children, her mother being Henry's first wife, Catherine of Aragon.
She became Queen following the death of her half brother, Edward VI, and the failure of Lady Jane Grey to secure the throne.
Mary did not have an easy life. Henry's obsession with both marrying Anne and fathering a son resulted in Mary being proclaimed illegitimate, stripped of wealth, barred from the line of succession, and forbidden from seeing her mother.
Her properties and place of succession were later restored, but Mary's refusal to give up Catholicism and recognise Henry, and later Edward, as Supreme Head of the Church of England remained contentious issues.
Soon after Edward's death, Mary proclaimed herself Queen. Supporting her were Catholics, members of the Council who had previously supported Jane, and those who regarded her as Edward's true heir, irrespective of faith.
Mary's reign focused on reversing her father's and brother's Protestant reforms. Catholic prisoners were freed, Catholicism restored, and almost 300 Protestants executed or burned, leading to her later being nicknamed 'Bloody Mary'.
In 1554 Mary married Philip of Spain in a political, and not particularly popular nor successful, marriage. Mary's first full-term and second shorter pregnancies were both phantom, after which Philip returned to Spain, and Mary fell into a spiral of declining health and depression.
Aside from the Catholic/Protestant struggle, Mary's reign was relatively strong; there was little conflict and she left behind a fairly secure country.
Mary died in 1558, knowing that her half sister and heir, Elizabeth, would return the country to Protestantism. She is buried in Westminster Abbey.
So next month, Elizabeth I, the third and final of Henry VIII's children to become monarch.
But before then, Mary I marks the completion of a row, so here's the full piece do date after 107 hours and 45 minutes of stitching: 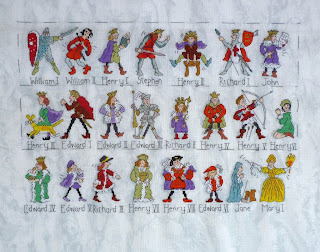 That's three rows down and three to go, or more or less the half way mark. My plans to add a border will add on a few more months of stitching but it is still on course to be finished at the end of 2022.
Take care,
Rachel x
Posted by Rachel at 9:57 pm

That's what I'd call a long term stitch and it's awesome that you've been able to keep up with it.

Very interesting! Again, I vaguely know some of this, but I've missed a couple and have to go back and catch up. :) She looks wonderful.

There was a lot of stitching in that frock! Apart from the minor detail of burning lots of people, she had a reasonably stable reign!
Again, how different her life would have been if Henry had behaved with honour.

Another great lesson. Thanks for sharing. Looks great!

Fantastic! I hadn’t remembered the people in between Henry and Elizabeth I !
In fact a couple of nights ago I was watching the film “Elizabeth” and was surprised to see Mary as Queen. I was convinced she had died by Elizabeth’s inadvertent instruction to her knights. But after some reading of Wikipedia I see I was thinking of Mary Queen of Scots!! Ah well, now I’ve got it!
You’re doing really well with this series Rachel, and I’m glad to read the historic notes too!
I’m currently reading a series of books set in 1585 so you’ve helped me get this part of history in order in my mind! 😊 Thank you!
Hugs
Barbara xx

Her dress is pretty, but why does she need so bloodthirsty? Also, how confusing it must have been to be alive at the time, and kings/queens and your very own religion changing every few years!