It's the first Saturday of the month (well, Sunday, sorry!) so it must be time for Jo from Serendipitous Stitching's People's Choice SAL. Many thanks to Jo for hosting this unique SAL which will have a different theme each month.

This month's theme is Dragons.

I'm really excited about this topic which means this is a quite self-indulgent and long (but could have been much much longer!) post. It also deviates away from cross-stitching a little at the end, so apologies in advance for the tangent. So grab yourself a cuppa (or something stronger) and enjoy!

I love Dragons, generally cute ones but then not all cute ones, and there are some non-cute ones I love too... it's obviously complicated as to which ones do or do not appeal to me.

I have a shelf full of little cuddly dragons, two walls adorned with dragon pictures, five different colour versions of the Lego dragon, and dragon skins for my laptop and phone but, surprisingly, I haven't stitched (or rather finished) many.

My only finishes are: 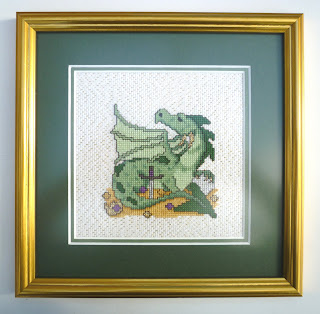 My Treasure by Dragon Dreams (freebie at same link above)

But I do have a few dragon WIPs.

You may recall the barely-started Emerald Dragon by HAED I showed in last month's Birthstones post, so I'm not going to show it again.

But also in my unfinished pile are: 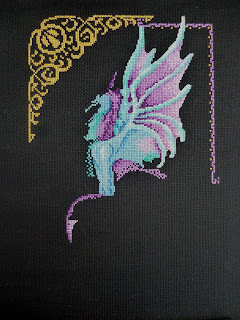 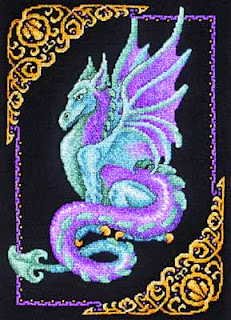 Mythical Dragon by True Colours
I started this way back in 1999 (it is my oldest WIP) and left it like this in 2000. It's on 18ct black, which was a really silly choice considering it's full of fractionals! I reckon I'm about half way through but am not sure if I will continue stitching it as it is, or restart it... on evenweave (probably the latter if the day ever arrives!)

The History Of Chocolate by HAED
Another HAED I've given up on because of the fiddliness. But it's not been purged so never say never. It would be a shame to see it go to waste. 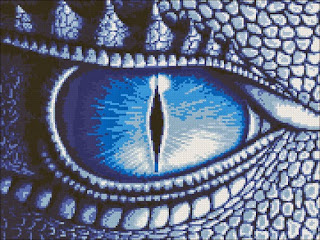 I made a very small start on this piece back in 2015 but only for four hours so it's never appeared on my blog. It will almost feel like a new start "when" I go back to it.


As for other future projects, there are quite a few dragons on my Large Stash page if you want to take a look, but I thought I'd show just the largest and the smallest: 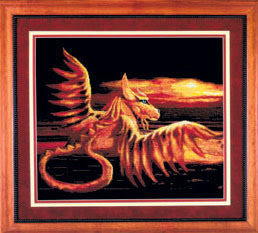 Fire Dragon by Cross My Heart
This has been in my stash for almost 20 years so I'm wondering if it will ever get stitched! I don't mind the gizzilion shades of orange and yellow, or that it needs to be stitched on black, it's just that it's so big! Maybe I should just frame the A4 cover picture and be satisfied with that?! 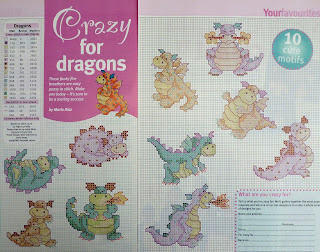 Crazy For Dragons from Cross Stitch Crazy Magazine
But on a much smaller and more easily-achievable scale (pun intended!) a couple of these will be making an appearance next year for the Smalls SAL.


Being mythological and fantasy creatures, dragons can basically come in any shape, size, colour(s) and level of friendliness you require. Doing a quick google search for 'dragon cross stitch' (I really should not have looked!) shows just how many are available; there literally has to be something to suit everyone's taste... 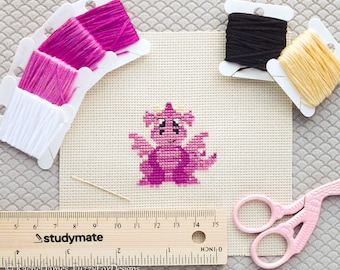 ...and not forgetting the famous: 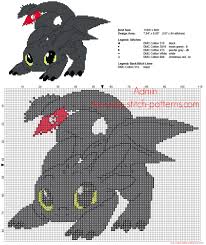 Toothless from How To Train Your Dragon by my-cross-stitch-patterns.com (free) 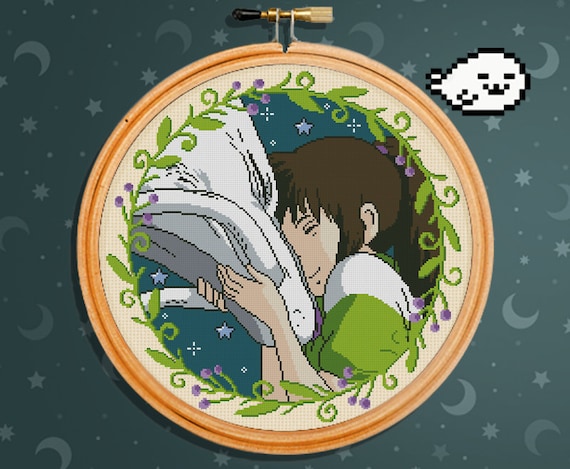 Haku from Spirited Away by HarpSealCrossStitch (etsy) 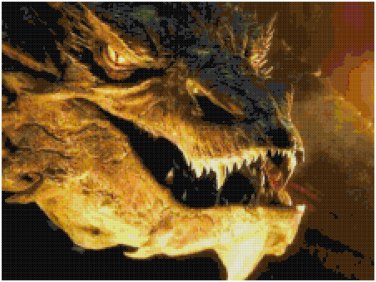 Smaug from The Hobbit from sunshineyday0630.ecrater.com


As a result of my search, the following two charts somehow (whistles innocently) found themselves being added to my etsy wishlist but ONLY my wishlist; I'm being a good girl... for now ;) 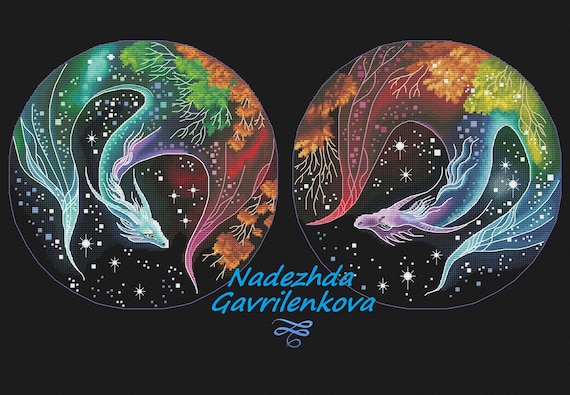 :
Rainbow Dragon (him and her) by PatternNadGavr (etsy) 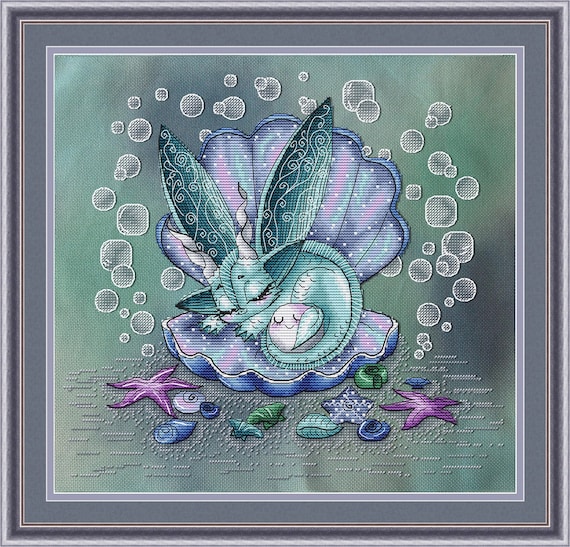 Dragon With Pearl from LoLaLottaShop (etsy)
There are quite a few in this series; click here if you would like to see the others. Go on, I dare you, you know you want to!
(Katie, there's a lovely sleeping dragon guarding a lighthouse...)


After my search, I convinced myself/my mum that I just HAD to have this one for Christmas, so it's been purchased and wrapped and is ready to go under the tree. I have a feeling I may *shock horror* deviate from my stitching plans and treat myself to a new start on Christmas Day. The kit is supplied with 18ct white aida but I'm not going to waste time stitching all that black when I can use black aida instead! 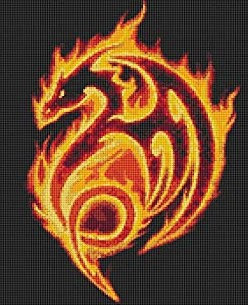 
Talking of Anne Stokes, I mentioned previously that I had lots of dragon pictures. Over the years, and after seeing some of the cross stitch versions on HAED, I have purchased various Anne Stokes 8"x10" canvas prints: 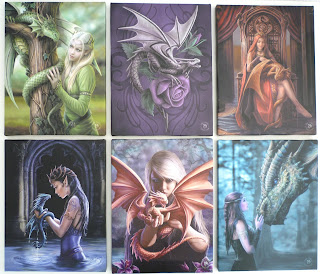 Some of Anne Stokes' Dragons

And, if you are familiar with other HAED dragons, you may have come across charts converted from pictures by Randal Spangler. Again, I didn't purchase the charts but instead purchased some of his limited edition prints and had them framed. I know it's cheating but, let's face it, I'm never going to stitch even one of his charts (I do have one in my stash) let alone these four beauties I've shown here: 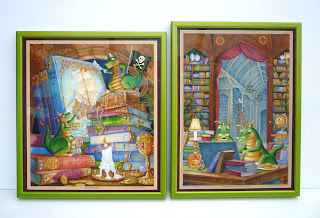 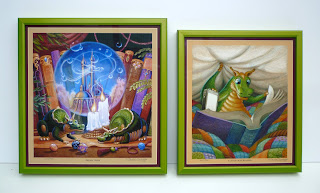 Some of Randal Spangler's Dragons


Well, if you've made it this far, congratulations! Let's end with a wave from my pride of Lego dragons: 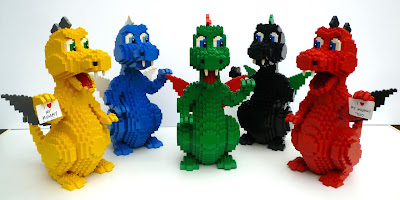 
Thanks for sticking with this post; I hope you enjoyed a trawl through my dragon psyche!

Next month - New Starts... and I promise a MUCH shorter post!

I should start this with one sentence. I'm not talking to you any more. HAHA. I love your post of course. I literally said out loud What a Jerk and made my family very confused haha. Yes Yes I added so many new pieces to my Etsy wish list. Yes Yes the dragon with the lighthouse is going to have to be purchased soon I can just tell. How have I never seen those dragon Lego's? Now I will block your blog from my list so I never see any new things....(great post).

I love dragons!!! And I loved this post. You have an incredible collection. I really adore Dragon eye that will be magical stitched up. Anne Stokes dragons are fantastic, another one of my favs.
xo Alicia

Wow, so many beautiful Dragons! I especially love your Dragon Eye piece! And I don't think I that buying the prints is cheating; since you love them.

I have many of those Spangler charts in my stash though I am afraid may never stitch them either. I see a great new start for Christmas coming up!

Wow! I must say I am not into dragons at all and to find a small little dragon to stitch for jo's challenge was a real challenge to me. But I loved reading all about all those dragons. And guess what my favourite are the lego ones. You should visit my blog about the dragons I wrote!AriadnefromGreece!

So many tempting charts and designs. The Tribal Dragon has reminded me that I have some Firewing designs in my stash that I didn't mention.

I am sure you can overcome the confetti in the book spine dragon to finish that cute one.

What a wonderful post Rachel. I love all of your dragons - stitched and otherwise. I love Randal Spangler HAED dragons. I might have stitched them 30 years ago but not today.

Thank you for always leaving me such nice comments on my blog posts. I really appreciate them.

So many dragons! Wow!