Yes, Midnight Manor is finished, complete with alterations and additions.

Here it was after 30 hours: 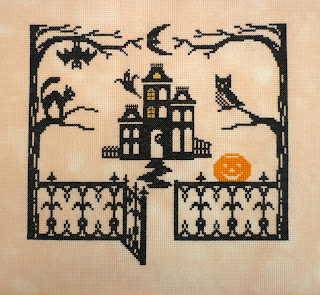 This is a reminder of what it should look like: 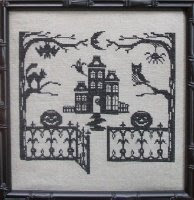 And here's my finished version: 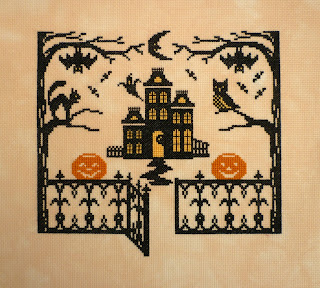 
I don't want to blow my own trumpet (OK, maybe I do a little!) but I think my version looks so much better than the original... more atmospheric and definitely less bland.

I made quite a few minor changes so let me talk you through them:

- the fence on the left was moved one space to the right since it was asymmetrical with the fence on the right, and I couldn't cope with that imbalance!
- the path had to be adjusted very slightly because of the above
- the spider in the top right was replaced with a second hanging bat
- both bats were moved two squares towards the outside since I didn't like the fact that their wings touched the tree branch (as you can see with the bat on the right in the 30 hour picture).
- some little bats were added to fill in some of the blank spaces, especially behind the owl
- the pumpkins were stitched in 3853, as opposed to black (and changed from 741 which the I had originally used)
- lights were added into the house in DMC19
- 19 was also used to colour in the eyes of the animals and the missing feathers of the owl

Other than that, it's all as charted!!!

I intend to frame this piece some time next year, so until then it will go into my Box Of Shame.

Knowing that I'm going to have a new start on Christmas Day has left me two days to try to squeeze in a very small piece before then. I know exactly what that piece will be and you'll see it in the Smalls SAL post on the 28th.

Congrats on the adorable finish Rachel. I love all of your changes.

Thank you for always leaving such nice comments on my posts.

Looks great, like your changes. The colors help it blend with the backround fabric.

Oh I love how you stitched this and yes it looks so much better then the photo. Love that fabric. Congrats on the finish. Merry Christmas and happy stitching

You don't have to blow your own horn; I'll do it for you! I love all the changes you made and do think it makes the design better.

I love this one!! It was so fun to stitch and I loved making it mine as well. Your version looks fantastic. :)

I just love how it turned out! The bats and the lights make great additions to the piece!

I hope you and your family have a very Merry Christmas!

It was a great information and Its really worth reading it.
isc123

Oh I agree with you. Your version is tons and tons better. Love it! Congrats on getting it finished up. Can't wait to cheer you along next year and see what pops up to be stitched.

Congratulations on the Happy Dance for this piece. I love your changes and the fabric choice is great too.

Hands down your version is a million times better. It's more Halloweeny and all your changes are perfect. I love it. Congrats on a wicked finish.
xo Alicia