A Monarch A Month - George I

Hi all!
It's now time for monarch number 32, George I. Here he is, presumably with the metaphorical keys to the English throne as he's saying goodbye to Hanover: 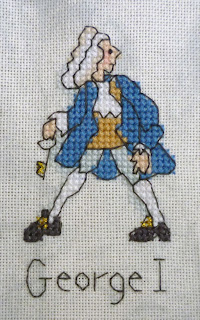 George I from Kings and Queens by Bothy Threads
Started - 2nd January 2021
Finished - 4th January 2021
Total stitching time - 5 hours 35 minutes
GEORGE I
Preceded by Anne (second cousin)
Succeeded by George II (son)
Lived - 1660-1727
Reigned - 1714-1727
Married - Sophia Dorothea of Celle 1682-1694 (divorced)
Children - 2 legitimate, 3 illegitimate
George, being Anne's closest Protestant heir as set out in the 1701 Act Of Settlement, became King following Anne's death in 1714.
He was the first monarch of the House Of Hanover.
From the outset George was not a particularly popular monarch, preferring to stay out of the spotlight and doing little during his reign to improve his image. For example:
- he surrounded himself with Germans and German customs.
- he appeared disinterested in learning English (although there is evidence he later wrote and spoke fairly good English).
- he made it clear he favoured his beloved Hanover more than England (visiting five times during his reign).
- he was disliked for the treatment of his wife (after their divorce he had had her 'imprisoned' for an extra-marital affair).
George also had a strained relationship with his son, who not only spoke out against his father's policies but who made a concerted effort to learn English, adopt English customs and popularise himself with the people.
In politics, George distrusted the Tories and favoured the Whigs.
He preferred private meetings with his Ministers rather than attending Cabinet meetings, this inadvertently allowing Parliament more freedom and paving the way for Robert Walpole to become Britain's first 'Prime Minister' in 1722.
Yet, despite his unpopularity, two ill-prepared and failed attempts by the Catholic 'Pretender' James Stuart to claim the throne in 1715 and 1719, and his implicated involvement in the South Seas shares crisis (when lots of rich people lost lots of money) George survived his reign.
He died from a stroke in Hanover in 1727 and is buried in Herrenhausen Gardens.
So next month, his popular son, George II.
Take care,
Rachel x
Posted by Rachel at 10:13 am

I'm glad you're able to continue stitching these. It will tell an amazing history when completed.

Lovely to meet George I - the monachy history is so interesting

Good to hear that his son was popular in spite of him!

Well described reign of this unusual monarch. It must be hard to keep it to your preferred word count when we know so much more about these later rulers. I hope George II is more fun to write about, excellent finish!

Another wonderful history lesson. Glad to see another one come to life.

Well done on completing another monarch. I guess the best you could say was that he wasn't a Tory LOL

It seems we are entering more civilized times now, if even someone like him can survive to die of a stroke, haha :D 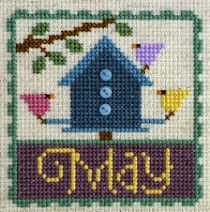