It's the 10th of the month so time for another Fully Finished Gallery SAL, the place to show your FFOing achievements since your last link-up. 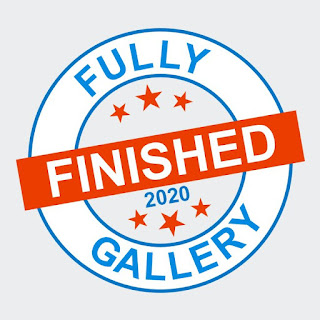 The link-up for this SAL opens on the 10th of each month and stays open for 10 days so, even if you have nothing FFOd today, or tomorrow, or the day after that, you still have plenty of time to join in.

I managed four FFOs this month, starting with a trio of Halloween projects. Remember these Dark Shadows pieces stitched last year? They were named by me as Candelabra, Bird Candelabra and Chandelier: 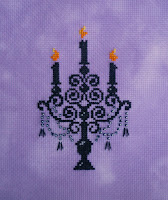 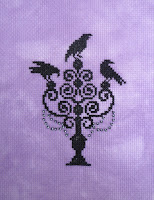 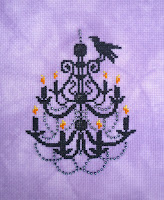 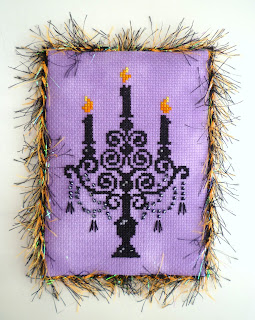 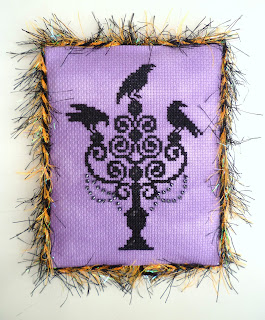 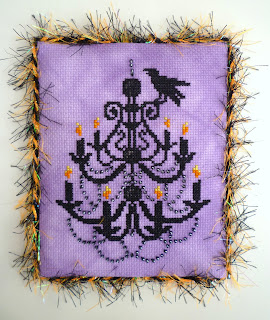 They were all very simple to finish. I attached the stitching to some card, with some wadding in between, and then attached those to a black piece of card which had been covered on the back with glittered black felt. The backing card was cut slightly bigger than needed so as to allow space to attach the twisted-together black and orange tinsel wool. The orange wool clashes somewhat with the purple fabric but doesn't look wrong as it matches the flames. Anyway, orange and purple are two staple Halloween colours so that justifies my choice!
Next up was Snow Globe Tree which I started last year, finished this year and decided to fully-finish as a scrapbook page. There were three reasons behind this. Firstly, I wanted to do something different to an ornie, secondly, I have only completed one other cross stitched scrapbook page, and thirdly I've recently been looking through all my scrapbook stash and when I saw the paper all the ideas I had just fell into place. So here's what I came up with: 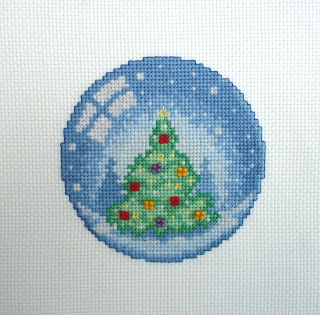 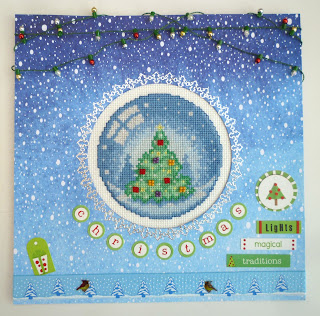 As well as the obvious stitching in the middle, there are various lengths of Christmas Tree lights strung across the top of the page, some winter tree ribbon at the bottom, and a row of Christmas Trees around the central circular cut-out. For reference, the page measures 8" by 8" I'm really pleased with how this turned out and hope to make more scrapbook pages when the right pieces are finished.

And that's it for me this month. Now it's over to you to show what you have finished.
Please link-up using the URL of your FFG SAL post and not the home page of your blog, adding a thumbnail of a finish and either your name or your blog name as the caption. The link-up will remain open for 10 days, closing at 6am UK time on 20th May.

Mister Linky's Magical Widgets -- Thumb-Linky widget will appear right here!
This preview will disappear when the widget is displayed on your site.
If this widget does not appear, click here to display it.

And please don't forget to follow other links and see what fellow fully-finishers have been up to; you never know, other projects may give you an idea for your next finish!

Once the link-up has closed I shall update the FFG SAL page with the number of entrants and entries. Last month there were 11 participants with another 25 FFOs, making 151 FFOs so far in 2020. That's brilliant!

Next month's post will go live on 10th June at 6am UK time. Hope to see you there!

Your Halloween pieces are so effective, lovely. Great snow globe too :-)

The finish on your Halloween pieces is perfect! The scrapbook page looks really good, too.

I love your finished ornaments! Purple and orange is so nice together:) And the scrapbook page looks so festive!!!

I love those Halloween finishes. I've never thought to do a scrapbook page. I do see them around blog land. I think it's a great way to finish some of the many pieces I stitch. Both are just lovely. Take care.

Congrats on the stunning Finishes Rachel. They are all gorgeous.

Oh, I love those! Especially the scrapbook page, and the Halloween ones are so cool with that fringe. well done.

Right now stitching time is winning over finishing time. I really hope to drag everything out sometime soon though. I know it won't be for this check in though. Thanks for continuing to host this though. It sure helps to have the finishing haunt my brain.

The Halloween ornies look great! I've been on a bit of a finishing binge, so I just picked my current favorite to share this month. :)

I think purple and orange look fab together, but I did grow up in the 1970s LOL. They are great Spooky colours too. These three finishes make a lovely set.
The snowglobe looks good too, very nice scrapbooking, especially those little lights.

Great finishing this month! I love the black-and-orange fuzz and that circle-cutout on the scrap book page is perfection.

Oh Wow, I adore your Halloween finishes! The tinsel really adds to it and the colours looks fantastic with it.
Your scrapbook finish looks great, you found the perfect paper for it. 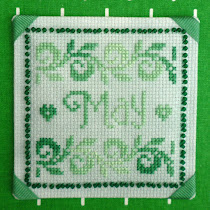