So, here's a new started-and-finished project to show you, one that was sitting near the top of my to-do pile for quite some time and which filled the 'new start' gap left after I had finished Haunted House Bell Pull.

I was originally only going to stitch the snow globe, then decided I actually quite liked the border but not the background, then thought actually I do like the background after all so stitched it as charted! It was also a good excuse to also bring out some sparkly fabric and variegated threads: 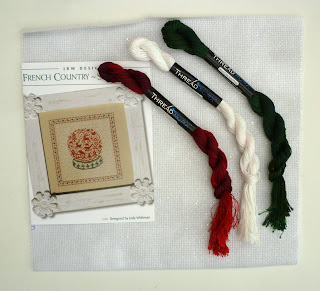 After ten hours of stitching I only had some of the background left to fill in so thought that instead of showing a ten hour progress picture I'd just plod on to the end. And here it is: 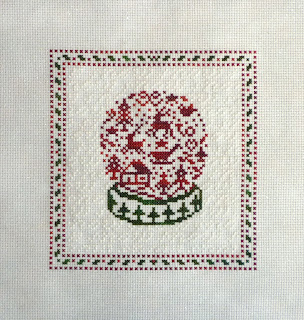 
The variegated threads are by ThreadworX - the green is 1048 Woodland Green, the red 1089 Bleeding Hearts and the white 10302 Reflections, which has very very pale red and green running through it (so pale in fact you can hardly see them!) The variations are quite subtle, and hardly visible in the photos, but I didn't want distinct colour changes so were perfect in that respect.

The background is actually the repetition of the word 'snow' although takes some concentration to figure it out!

I didn't think this piece was important enough to warrant framing so, surprise surprise, have made it into an ornie. Naturally some of the sparkles have rubbed off, and will continue to rub off, but at least I found some suitable fabric and finished it off with red barley twist cord. It's stuffed a bit too much for my liking but it'll go down in time. 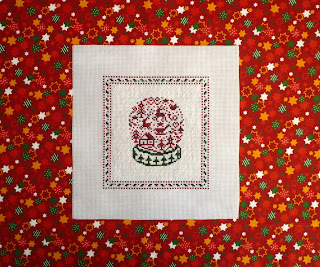 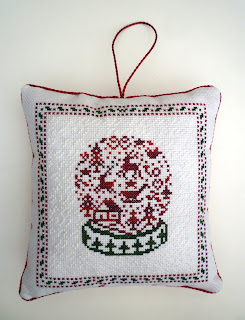 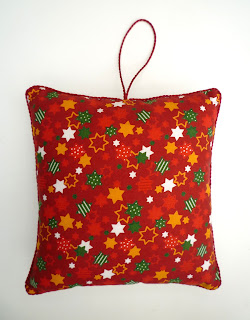 So, having finished this project, I had an empty 'new start' space again. In the last two days of September I made a fair bit of progress on my next new project although won't show a picture until I reach the ten hour mark, But, as a tease, I will tell you it's by Soda Stitch. ;)

Congrats on the cute finish Rachel. I love the backing fabric.

Congrats on your finish, great for the upcoming Christmas tree. Can you believe it's only 2 and a bit months left until the end of the year. Where has it gone!. Happy stitching

Beautiful finish! I love the colors you used!

You are such a talent at making these! I love this one so much. And the order really sets it off. As usual perfect pairing with your fabric too.
xo Alicia

Oh I love how this turned out. I agree with you. It's perfect just the way it is. Congrats on the finished finish!

I don't know how I missed this post! I had to go searching for it when I was in the middle of your current post! I love how this piece looks! You did a great job on it Rachel!

Great little design and a lovely finish too.