At the beginning of each month I like to post the progress made during the previous month on the WIPs started in 2015/2016 for Debbies Ultimate Crazy January/February Challenges. Although I was still stitching towards the end of last year, I failed miserably with these postings but, you know, new year, new start so let's try again.

My aim with my WIPs is to finish one and work on two more each month, culminating in 12 finishes by the end of the year.

During January I completed Winter from The Four Seasons (posted previously) and worked on the following two pieces: 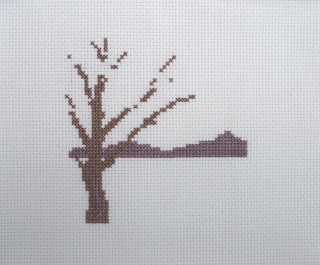 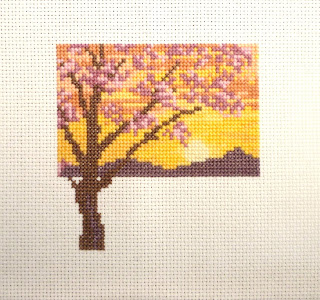 Spring from The Four Seasons
started 1st February 2015; not touched since then
completed down to the horizon 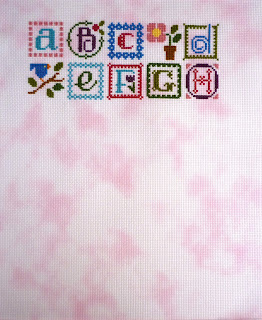 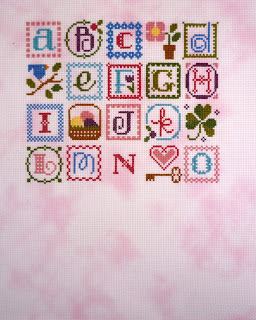 
I'm a bit annoyed at the Lizzie Kate greens again - I had an issue with them when stitching her 'Green' series and should have remembered. On the picture below, look at the border around d, the letter G and the right half of each trefoil leaf - the recommended green I used (bottom picture) certainly doesn't look like the olive green shown, even taking into account the colour variations between the two photos. 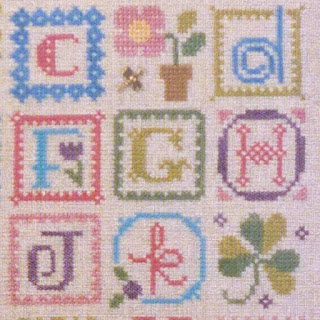 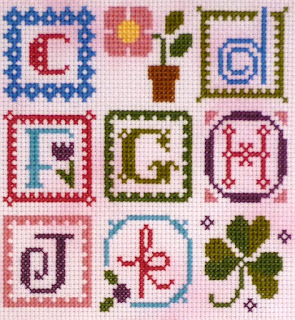 So it looks as though I may be doing a bit of ripping and re-stitching with a better match. It's annoying but at least it's not a major problem. There are a few other bits sewn in the 'wrong' green (mainly leaves) but I'll probably leave them. We'll see...

During February I should finish Spring from The Four Seasons, make further progress on Spring Alphabet, and work on another project from my WIPs.

Great progress Rachel. If I don't get off this darn computer, I'm going to start February a day behind. lol

Lovely progress! The paper print and also the computer display sometimes vary for some colors. I have had such issues many times. I go with colors I feel look better. Also they use lots of bright lights in the studio and then some image processing also happens which causes lots of changes in the actual finish.

I like the alphabet, but can definitely see the difference in greens.

I can see why you are unhappy with the recommend colors, those greens don't even look close! Hope you get it changed to your satisfaction without to much frogging. They both look great though!!

Nice to see some of these designs coming out again. I'd say those greens are nothing like the ones in the cover photo!