I hope everybody has had a good Christmas or restful break over the last few days? Was Santa good to you? I'm excited to see any new goodies you have received and might be stitching on in 2016.

Santa was good to me and gave me a few little second-hand charts which he'd apparently bought on ebay - clever Santa! So I have a little Halloween Kitty and some more Lizzie Kates to add to my collection. My daughter also made a fabric case for me to carry a project and the accompanying thread bobbins. It took a long time and required a lot of work so I will blog about it later as it definitely deserves it's own post.

Our family had a quiet but busy festive period but not so busy that I couldn't do a fair amount of stitching! So, as the title has given away, I have another Challenge finish to show you. This will definitely be my last for 2015.

Once I'd picked this piece up I couldn't put it down and somehow knew I would work on it until completed. I left him back in June having only stitched the umbrella and rain but now Lickle Ted looks like this: 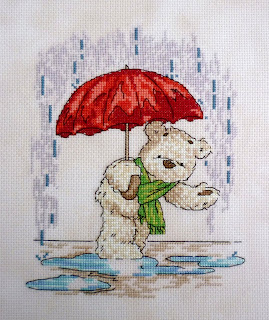 
Some of the umbrella and scarf were supposed to be stitched using satin threads but I just used normal DMC. Compared to the original picture I don't think it makes much difference. I love the half stitching for the rain and the variegated thread used for the puddles. I even enjoyed watching him come to life as the backstitching was added. Unfortunately the subtle shading of the fabric has not come out too well in the photograph. :(

For the time being Lickle Ted will become an Orphan in my Box of Shame until I decide how to frame him.

Now to go and make sure everything is ready for my 31 new starts in January. I must be mad!

What a sweet finish! It always amazes me how many hours go into each project. I'm glad you count up the time as it's so interesting to see.
Really looking forward to seeing your new fabric case made by your talented daughter.
Who knew Santa shops on ebay? Clever old Santa!

Another great finish! I'm not doing the 31 starts this year, I'm trying to work on some of those I started in the challenge last year!

Cute finish and so fitting for me as we are currently on day three of solid rain. Looking forward to seeing all your new starts.

Such a cute finish!!:) Santa for you was really clever ;) Looking forward to see your daughter's gift.

Congrats on another great finish - 17 in one year is great! I've decided not to take part in many challenges this year and hopefully make 2016 the year of finishing some of my long over due wips!

Oh he's adorable!!! Congrats on the finish. I haven't picked up my needle yet so today is the day. Good luck getting your pieces ready for Jan. I need to work on that tomorrow. I have it almost done but some messing to do to be 100% ready. We get to start something soon!!

I love all your finished projects lately:) And all the framing you've been doing looks wonderful!! Seems you've been very busy:)) But 31 more starts...wow, rather you than me lol:)

Ted is very sweet. Another cute finish! I can see the subtle effect on the fabric :)
Looking forward to seeing your daughter's creation.

As a collector of "orphans" myself, I feel your pain!

Lickle Ted is just the cutest! I can see the slight coloring in the fabric...looks like an overcast day. Perfect choice of fabric for this piece! I can't wait to see the fabric case your daughter made for you. I bet it's just beautiful!!

Congrats on another adorable finish Rachel. I'm so glad that you are joining me in the January challenge. Looking forward to seeing what you start next year. You always pick such cute charts.

:) Great finish! I'm starting another 31 or so next year too.

Congrats on the cute finish :). You've made great progress this year!

Oh, so sweet, this little guy. He was certainly a fun stitch.
And so great to read that you will start another Crazy Challenge next year. I love these challenges but won't participate next year. I want to start a couple of big projects that I have kitted up for a while and my fingers are itching to stitch them. But I will follow your new starts in your challenge.

Love your finish! Can't wait to see what your daughter made for you. This year I am challenging myself to get some of my UFOs finished. I have picked out the ones I want to work on. Also I have one or two new starts that I will start on the 1st and hope to work on and get finished (or close) by the end of the year. :) GOOD LUCK with your 31 new starts...can't wait to see them get started!!

What an adorable finish! You've done a great job getting so many pieces finished.

Och what a cutie
Good luck on your new 16 starts