No, your eyes do not deceive you! I have been beavering away and completed yet another project from DSDUCJFC 2015. This is Polar Bears from the Gloria and Pat Young'ungs collection.

After finishing Ravenclaw I went through my WIPs and this one stood out. It was about 60% complete but little did I think I would actually finish it! To be fair, there are big blocks of colours so it's not surprising it stitched up quickly. Here it is then: 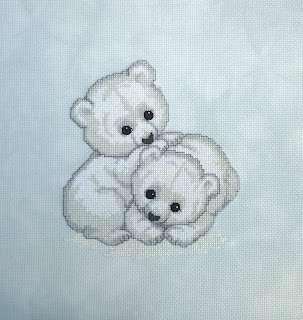 There was absolutely no way I was going to allow this gorgeous finish to go into my Box of Shame, so I went to my usual ezeframe.co.uk, chose a 21mm blue and grey painted frame and this is how Polar Bears looks now: 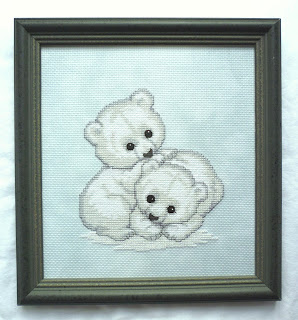 I dabbled with many black and grey frames but thought this one looked best as it complimented rather than "framed" the picture, if you know what I mean. Mounts were definitely not necessary.

It's also very difficult to get the colour of the fabric right. It's called lagoon so can have hints of blue, green or grey depending on the lighting. This is about the most accurate colour I can get. I hope you like it - I LOVE it (of course)!

And this finish marks a milestone - I have now officially finished 1/4 of my January/February starts. I'd only set myself a target of finishing 6 January starts this year so am way ahead - even if I add in 6 more target finishes for the February starts.

However, this achievement has very much been at the expense of my bigger projects so maybe it's time to put down my Challenge pieces for a while and return to my too-long-neglected larger WIPs. So..... OMG Tigger Is Out - here I come!

Gorgeous finish! Glad to see you've framed it too. You've done really well with the Challenge so far.

Wohoo another finish!!! Love it. So cute. The frame is perfect. Can't wait to see your large piece progress.

Congrats on the gorgeous finish Rachel. They look awesome in the frame.

Congrats it looks fantastic! They are so cute I think the frame fits them perfectly :)

They are very sweet! I love your fabric choice on this and the frame is very complementary. Yes! Pull out a large wip for a bit... It'll be fun!!! ;)

A really nice choice of frame, it looks gorgeous!!! Congrats on yet another finish... you're on a roll :)

I've been waiting for Tigger to show up! It's on my wish list and since I don't have it yet I'm looking forward to seeing yours.

oh my goodness this is adorable! Everything about it is beautiful! You matched everything perfectly!! Well done, Rachel! But...I still think you should rename that "box of shame." You worked so hard on everything in there...there's no shame to it! Think long and hard on a new name, missy! :)