First of all, thank you to the replies I had concerning Needle Needs. I'm sad others have also had issues and found them awkward to deal with. By all accounts they are certainly not a customer-orientated company. Please feel free to mention my "rant" to others you know or post a link to it. I would certainly be interested to hear more comments, whether positive or negative.

I'm back with ANOTHER new start although, to be fair, I already had this one planned as a TBC on my WIP rotation at the beginning of the year. I just needed the bars.

This chart was perhaps the most heart-stopping and GOT TO HAVE IT NOW moment I've ever had! I didn't care how big the design was, I just had to add it to my WIP rotation. I had been looking for a decent Scarlet Macaw chart for ages but the birds all seemed too false. This one, however, was perfect even though the finished size on 16ct will be 25" x 33" before framing! Congratulations to Rebecca Latham for producing such a fantastic work of art and to Shinysun's Cross Stitching for charting it!

I am not going to stitch the background, which will cut out well over half the chart, but have chosen a subtle hand-dyed brown fabric. I chatted with Silkweaver Fabrics first to ensure that it was suitable and would look like its screen shot but, naturally, when the fabric arrived it was not what I had expected and disappointment sunk in. It should have been brighter and with a buttery tinge.

However, having spent £40 on the fabric and been robbed of £13 for import duty, I was not going to spend another £7 to post it back for an alternative (they do offer a 100% satisfaction guarantee). After all, who's to say I would not have also been disappointed with its replacement? So I decided to stick with it and the more I look at the fabric now I've started sewing on it the more I like it. At that price it's a case of having to really!

This BAP has an estimated stitching time of about 650 hours! The confetti stitching isn't too bad and the colours are going to be great to work with so I know I'm going to enjoy stitching him. I say him because I've given him a name - Sherlock! Other family suggestions have included Cosmos, Spectrum, Horizon, Mrs Hudson, Cinnamon and Watson. What do you think?

So, here's the first WIP picture. On the full piece of fabric there's not that much to see at the moment but it's going to be very interesting (and hopefully not too boring) watching him grow. For your information, the fabric is browner than the picture shows, 30" wide and only just fits on the top of our chest freezer which is where I laid it for the photo. I said it was big! 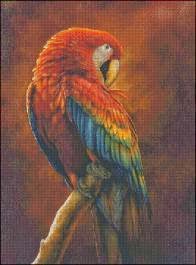 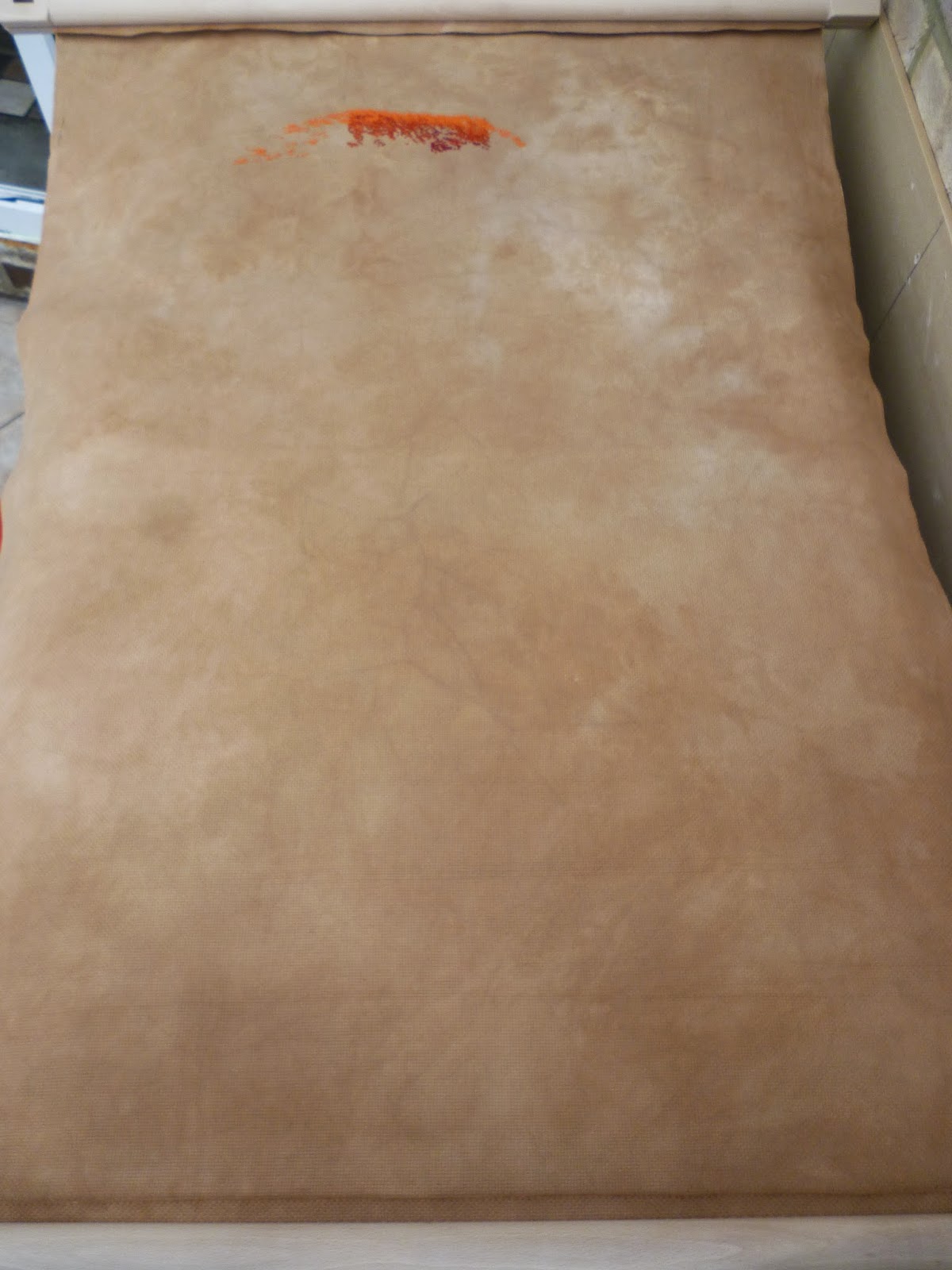 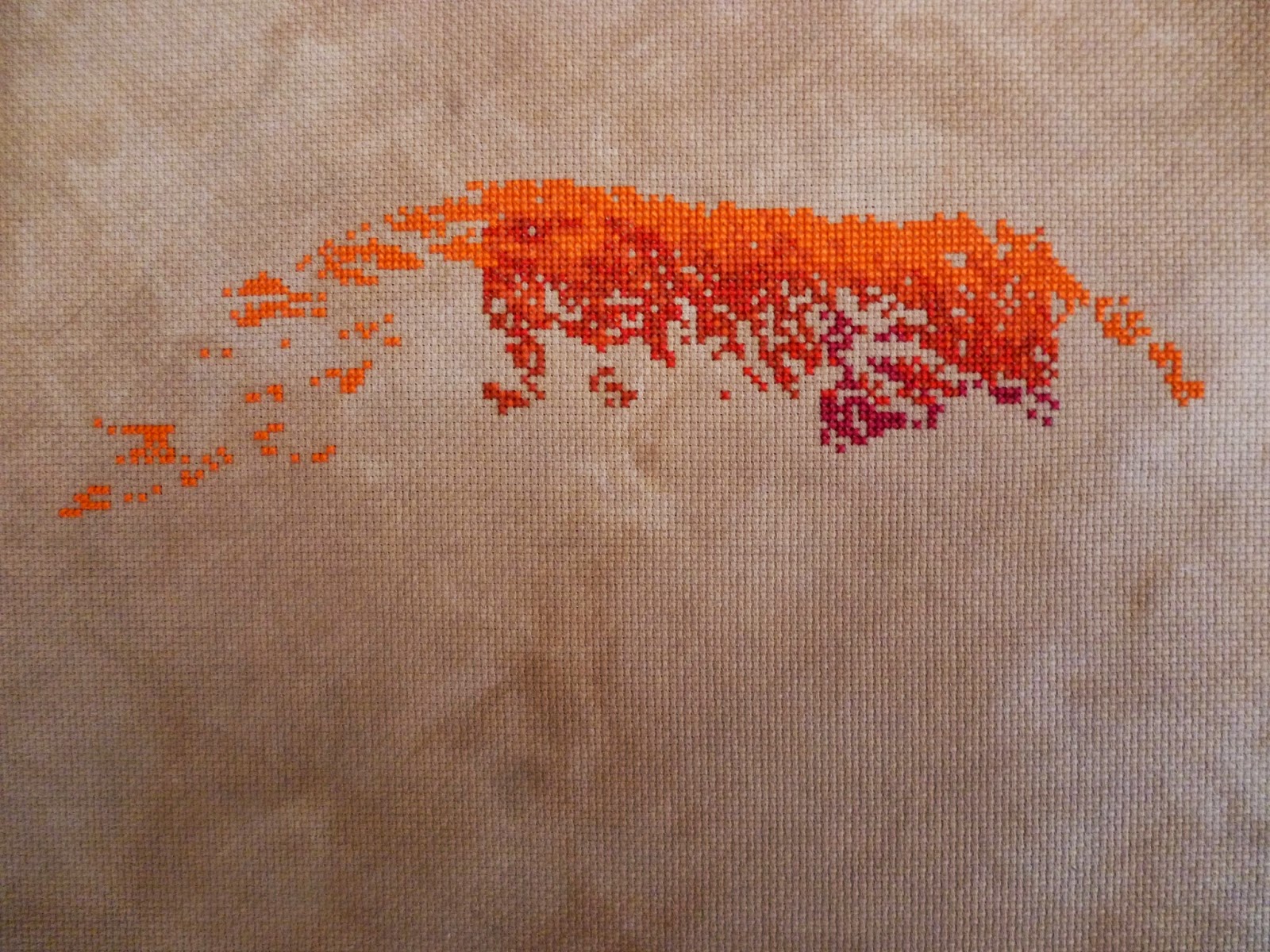 I'm going to stay with Sherlock for another 10 hours so (with hubby away for a few days) I'll be back soon with a second update.

Hello Sherlock! I am feeling smug as I guessed correctly this would be your new start. I'm sorry you were disappointed with the fabric colour but I think he will really stand out on it.

He's a beauty, no wonder you feel for him and I think he'll look fine on the fabric, he should pop off of it lovely. I'll be watching your progress on him!

That's still a lot of money for a fabric that you're not happy with though but I can totally get why you didn't take it any further. I've heard about things like this happening with Silkweavers all the time which is why I personally wouldn't order from them myself but then again I love Sparklies and Crafty Kitten too much anyway.

I'm glad you're feeling smug! I don't think there's been one hand-dyed fabric yet that I've been 100% happy with, but that's the risk you take.

I would have preferred to order from Sparklies or Crafty Kitten as I have used them in the past but their colour options were not appropriate (maybe I should have enquired if they could create something for me?) It was an expensive gamble, but I'm sure this Antique Almond will be fine. I hope. :)

I think it's lovely! Although the fabric isn't as you wanted, I think the design will stand out really well and be a nice contrast. The import duties are annoying which is why I don't buy my fabrics from the US any more, especially when there are some excellent ones in the UK now!

I look forward to seeing more of this very soon :)

Thank you! I've managed to stitch a bit today and am loving the bright colours. I think the fabric will be fine. :)

This is probably one of the most beautiful designs I've ever seen. I can't wait to see your progress!

The is a gorgeous design and your off to a wonderful start:)