This month's theme is Traditional Samplers.
My idea of a Traditional Sampler is one which is square-shaped, and made up of letters, numbers, and/or rows of speciality stitches, tree or flower motifs, and maybe a religious saying of some sort.
In which case here are all the traditional samplers I have stitched, am stitching, are in my stash, or are on my wishlist: 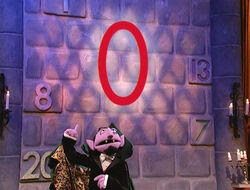 That's right (ah-ha-ha) none!
As you might have twigged, I don't like traditional samplers and I would never stitch one, the same as I would never stitch, for example, a piece of artwork by Monet or Van Gogh, or a portrait of some sort (my nightmare day out would be to an art museum!)
I found this article from the V&A Museum about the history of needlework samplers, and whilst absolutely none of the designs float my boat, it's very interesting and incredible to think that many were often stitched as part of a young lady's formal education, and often at a very young age. I may not like any of them, but that doesn't mean I don't appreciate the effort put into them, especially considering they didn't have the luxury of electric lighting, let alone daylight lamps!
A lot of reproduction samplers have been charted and are now available to purchase, such as this Charlotte Bronte Sampler by Moira Blackburn, which Charlotte stitched when she was six: 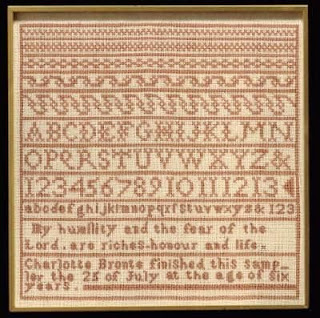 Or this one by Samplers Remembered originally stitched by Lucy Snushall in 1847: 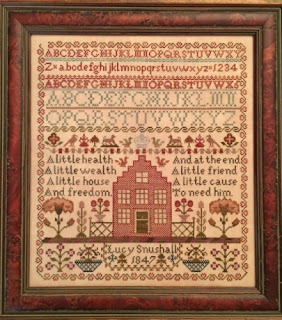 It's surprising how many are available, if that's what you like.
Next month's theme is Butterflies, perfect for the time of year.
Take care,
Rachel x
Posted by Rachel at 4:07 pm

Isn’t it amazing that such young girls stitched such complicated samplers? Interesting post!

Thanks for taking part in The People's Choice this month, even if it was a stretch! I've been to the V&A museum where they keep all the samplers. It's by appointment only and you have to tell them in advance which ones you want to see but it's quite incredible to see the actual original works.

It's truly mind-boggling that a 6-year old girl could stitch something like that!?

I'll have to see what I can come up with for this one. I don't stitch *that* traditional patterns myself!

Me either haha. I've done a few band samplers....well not finished but still haha.