A Monarch A Month - Charles I

Hi all!
Another month, another monarch. This month it's number 26, Charles I.
I have a sneaking suspicion this picture might give a clue as to his fate: 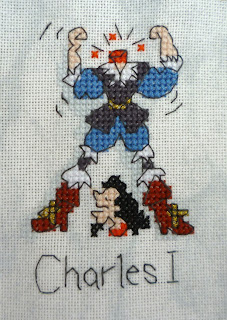 Charles I from Kings and Queens by Bothy Threads
Started - 4th February 2021
Finished - 7th February 2021
Total stitching time - 5 hours 45 minutes
I forgot to mention in last month's post that, with Elizabeth I being the last of the Tudor dynasty, James I became the first of the Stuart monarchs.
CHARLES I
Preceded by James I (father)
Succeeded by Charles II (son)
Lived - 1600-1649
Reigned - 1625-1649
Married - Henrietta Maria of France in 1625
Children - 4 boys and 5 girls
Charles became heir apparent in 1612 following the death of his older brother, Henry, and King in 1625 following the death of his father.
He was an unpopular monarch throughout his reign, starting with his marriage to a Roman Catholic (prompting fears of a resurgence of Catholicism) and building throughout due to his belief in 'the divine right of kings' i.e. that monarchs were appointed by God and answerable to no-one.
Based on this belief, Charles dissolved Parliament in 1629 and ruled until 1640 as an absolute monarch - the 'Eleven Years' Tyranny'.
By 1640, with treasury funds depleted and only Parliament able to legally raise taxes, Charles was twice forced to reconvene Parliament. In return for funds, Charles reluctantly agreed to some of his closest allies being impeached for treason.
Charles himself suspected five members of Parliament of treason and, when Parliament refused to hand them over, personally interrupted a sitting in order to arrest them.
By over-stepping his monarchical authority, Charles' invasion of Parliament helped trigger the 1642-1651 English Civil Wars - Charles' Royalist 'cavaliers' versus the Parliamentarian 'roundheads'.
Three years of skirmishes, battles and failed negotiations ended with Charles' defeat and imprisonment in 1645. After a brief escape in 1647 he was recaptured and put on trial in 1648.
Because of his belief in the divine right of kings, Charles considered the court unlawful. Nevertheless, he was found guilty of treason i.e. of putting his own interests ahead of those of his country.
He was beheaded in January 1649 and (after his head had been sewn back on!) buried in St George's Chapel, Windsor.
There then followed a period of 11 years without a monarchy, known as The English Commonwealth. This can be divided into three stages:
- 1649-1653 under a Rump Parliament (basically those not in favour of a monarchy)
- 1653-1658 under Oliver Cromwell (who, having just overthrown the monarchy refused the title of King but was given the non-hereditary title Lord Protector, which was more-or-less the same thing)
- 1658-1659 under Oliver Cromwell's son Richard, who was a weak leader, not really interested in the role and forced out very quickly
By 1659 opinion in favour of the restoration of the monarchy had begun to gain momentum. Charles' son and heir, having fled abroad in 1648 was asked to return to Great Britain as Charles II.
So next month another Charles. Let's hope he learned lessons from his father about how not to be a monarch!
Take care,
Rachel x
Posted by Rachel at 9:14 am

What a history lesson. Thanks for sharing.

Poor old Charles! I have this kit somewhere - I wonder where?

Such an interesting one to stitch, and learn a little more about. I do remember the factoid about his head being sewn back on. What you do for the crowd I guess?

Such a fun way to present history! I really enjoyed this!

A good synopsis of Charles I. I like that the design shows that he was beheaded (not that I'm gruesome, I hasten to add).

An interesting period of time! Maybe you should add Cromwell peeking round the corner of the sampler? Saying "I never wanted to be King anyway!"

Tyranny? English Civil Wars? The English Commonwealth? Why don't we ever learn about these things in history class? Thanks for teaching me what the German school system failed to do!

Oh my, his body looks angry, but his head is smiling! Still, great stitch!

Oh my, it looks like nobody wanted to be his friend because he was thieving bully!! But at least they reattached it before they buried him! 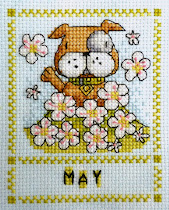