So having finished the Four Seasons I had to frame them straight away. If you read my last post, you will recall I had a difficult time choosing whether to frame them together or individually. After much procrastinating I decided on together and, having now framed them, don't think I made a mistake. The frame measures 11x11 inches and is 13mm Walnut Stain with a snow-white mount and non-reflective acrylic glazing from my usual easyframe.co.uk. 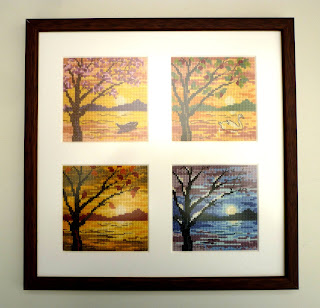 I originally started this set back in January 2015 hoping to finish them and give them to my mum that Christmas. Well, 2015 came and went, as did 2016 and 2017, but finally in the summer of 2018 she's got them! Luckily she didn't know I was stitching them for her so it was a nice surprise rather than a very long wait.

My only small niggle is that yellow is a major colour in three of the seasons but not present at all in the fourth, so they look a little ... lopsided if you see what I mean. It doesn't mean I like them any less, just wonder why the colours weren't changed more for each season. But then I'm not a designer, so maybe it was tried but didn't work. Who knows?!

The Autumn piece was the oldest finish to have been sitting in my Box of Shame so it's also been pleasing to have removed that.

And for those of you that like the Box of Shame progress bars... they're continuing to fill up! I'm now seriously wondering if I can get get them completely full by the end of the year, but only wondering; I'm not quite up for it being a challenge!

Congrats Rachel. They are absolutely stunning. You are an amazing finisher.

You always do a great job selecting perfect frames. I can understand your niggle about winter. I would think at least something with more red (we have beautiful sunsets in winter here) would've worked. Perhaps the designer has darker days!

Congrats on the final finish! They look great in the frame!

Woohoo! Well done finishing and getting them framed so quickly, that's fantastic! I see what you mean about the yellow, but definitely doesn't detract, just interesting.

They look fabulous Rachel! I LOVE how you have them all framed together and I do see what you mean about the colors. Your Mom is a very lucky lady!

Wow they look wonderful. I do agree with what you are saying about the yellow. I would have changed the overall colors each season too like you suggested. Who knows though. They look perfect just the way you did them. Good luck getting them finished up. You can do it!