Today I have 3 more Box of Shame finishes to show you.

These are Milk Train, The Lock and Canal Crossing from the Silhouettes range by Heritage Crafts, which I finished in April and August last year and April this year respectively.

I had originally planned on purchasing just a simple wooden frame, but I played around with mounts and decided I preferred them with mounts rather than without. They are 13mm mahogany frames with mushroom top mounts and black bottom mounts. I think they're perfect! 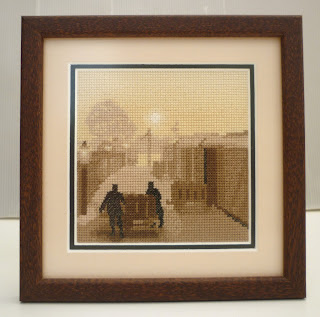 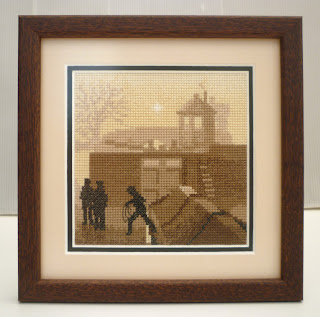 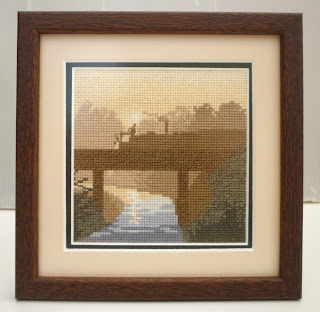 
They're quite small too, measuring just 17cm square. I must have done a good job as my hubby even commented how effective they look - and he very rarely comments on any of my stitching, finishing or framing! Here they are all together: 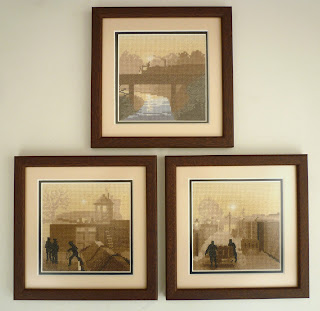 Goodness knows if I'll ever stitch any of the others in the series; I do hope so but they'll first have to fight their way to the top of my fairly long to-stitch list and battle it out with other much stronger contenders. So we'll see...

You do such a fantastic job at framing your pieces Rachel. They look great.

They look stunning grouped together Rachel. Congrats on such a great job Rachel.

Oh I agree with you hubby. Perfect. Just finishes it off amazing. Congrats!

Love these! I still need to finish Twilight LeMans. I so wish I'd found Twilight bike shop before it was OOP.

Wow! I love your three finishes... they all look perfect with the mount and frame that you chose for them... definitely a good choice!
Hugs x

They look so great Rachel. You know you have done a spectacular job when a non-crafter is impressed. Good eye hubby :D. Looking forward to your next cross stitch adventures
xo Alicia