I'm late again with posting another Debbie's Super Duper Ultimate Crazy January February Challenge (DSDUCJFC) 2015 finish as this should have been posted three weeks ago!! During October I finished Pretty Little London. You won't have seen this project for a couple of months, as I did not post a September update, so here are the final progress pictures and the finished piece:

How you last saw it at the end of August: 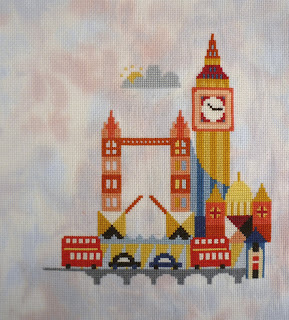 At the end of September: 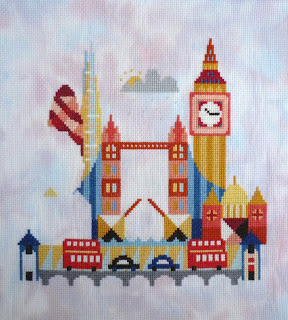 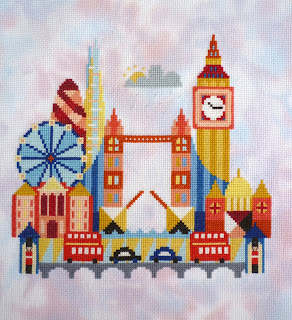 Obviously I'm going to say I thoroughly enjoyed stitching it, especially when London means so much to me. It seemed to start off really slowly but once past the halfway mark it roller-coastered along. I'm not quite sure yet how I'm going to frame it - the colours in the fabric and stitching aren't going to make it easy but I'm leaning towards dark grey at the moment. We'll see.....

Pretty Little Paris was also started in 2015 and is on my finishing list for 2018.

Speaking of 2018, I've devised two stitching plans - one heavily concentrated on finishing more WIPs and one more skewed towards new starts. At present I'm not feeling the excitement in finishing projects, nor in starting new ones so it's still very much up in the air which direction I'll go. I haven't lost my mojo, nor my interest - I suppose I'm just plodding along until something screams out to me which isn't happening at present but will one day!

In the meantime, there should be another finish soon.

Cute finish! Maybe go both ways with half new starts and half WIPs?

I agree with Anna, maybe a mixture of both would be ideal for 2018.

Cute finish! Can't wait to see in which direction your needle points!

Congrats on the gorgeous finish Rachel. I need to get back to my city charts.

Congrats on the beautiful finish. I'm definitely not doing the 31 new starts in January. I know I have a million things to start but I need/want to focus on finishing things I already have started too. Good luck deciding which one you want to do.

Wow Rachel that looks amazing. I love how these designs stitch up. Good luck with Paris and I'm sure you're stitching genie will come up with a plan for you to tackle. Just have fun honey.
xo Alicia

London looks lovely! I scrapbooked mine onto some Union Jack paper.
I'm making my plans now, focusing on my "18 in '18". Apart from my BAPs they will have to be smaller projects to get 18 in LOL