At the end of June I left Cream with only a little left to do: 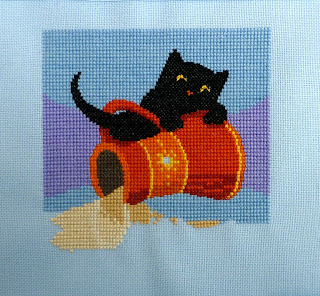 Five hours later, thanks to there being a couple of good tennis matches on at Wimbledon, he was all finished: 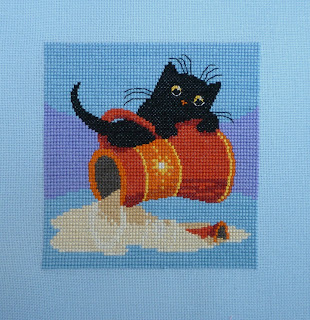 
The remaining two in the series, Tea and Sugar are not planned for finishing this year but will be completed in 2018. So for the time being Cream becomes an additional piece in my Box of Shame. At least I know it won't stay in there forever though.

Now back to seeing how much more progress I can make on my other pieces. The Red Foxes are calling me!

Congrats on the cute finish Rachel.

Congratulations on the Happy Dance for Cream. I had to go and look at Coffee, they make a great pair.

Goofin' Off Around the Block said...

My, but that is an adorable finish. It's not a box of shame, it's a box of fame. Have a great day! --Andrea

Great finish, two down and only two more to do. They will look so wonderful when all framed side by side with the blues and oranges.

He turned out adorable Rachel! Looking forward to seeing the others...next year!

This is so cute. Well done on yet another finish, you amaze me with how many you manage.

Congrats on another finish!! You're doing so well whittling down these WIPs. meanwhile I've started something new...

A very cute finish Rachel. Looking forward to seeing what is next.