I really tried to finish the final Playful Puss WIP before the end of the July but without success. I still had the grass and backstitching left to do, so a few hour's work. But I've finished it now..... just four days later than hoped.

Here's how I left this piece on 6th January after 4 hours of stitching: 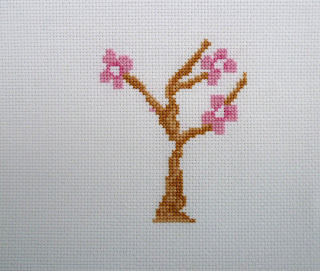 And here's the completed project: 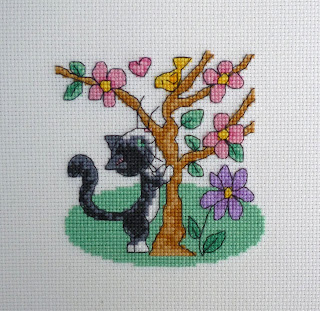 It's strange, I'm not particularly fond of cats but I do seem to be stitching or have stitched quite a few cat/kitten projects recently. I guess I'm just drawn to them. My next planned finish is also a cat, but one with a bit more of an attitude!

This finish also marks the halfway point of my January 2016 Challenge pieces. I think I'd aimed to complete somewhere between 25-27 of the 31 new starts by the end of the year so I'm not doing too badly.

Best get cracking on working towards finishing number 16 then.

Another nice one finished. Good luck on your next wip and I hope you get enough done this year that you want to do it again next January.

Thank you Rebekah.
I hadn't planned on doing the January Challenge next year unless I had less than 40 WIPs by the end of this year (I still have 72). However, temptation is already beginning to creep in.....!

A wonderful finsh. The little cat is very cute.
Have a nice weekend.

We could always do a WIP Challenge :)

Excellent finish on this one! Apparently the cats are growing on you and can't wait to see some more Cattitude :)

Another cute finish. I like Tiff's idea of 31 WIPs for January.

Do you know how many of us that would be so unhappy if you didn't do the January challenge next year Rachel???????

These little cats are so cute! Congratulations on the finish and being at the half way point of your goal!

Love the finish!! Too cute. I much prefer dogs but stitching cats are cute. They don't need litter that way haha. I keep telling myself I'm not allowed to join in the Jan starts but then the next day I remember how much I enjoy the new starts and say I'm doing it no matter what haha.

Congrats she's cute! I'm not a huge cat fan either even though we own one. I much prefer dogs lol

A sweet little kitty... You know Leo the lion's reigning over the zodiac right now! So maybe that's why you feel like stitching cats at the moment lol! ;)

Aww, how cute is that. Great job.