I'm taking advantage of my daughter being out to use her laptop again. Hopefully I'll be finished before she returns and claims it back!

I have met my mini July target of completing another 2015 Challenge piece and was surprised at which one it was. I'd only intended to stitch the second cat but just kept going until only the backstitching was left. And what was the point of leaving just that? So I carried on until completed. 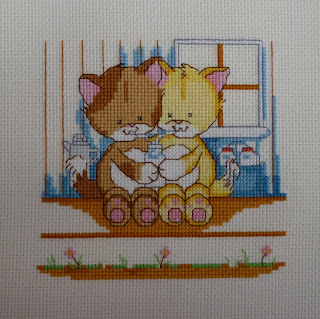 
Like all of my pieces so far I really enjoyed this one, especially watching the backstitching bringing the little kitties and the milk bottles to life. I think it's rather sweet. How soppy!

Now to try to stitch on four more Challenge pieces before the end of July.

Aww those kitties look so cute:)

Congratulations on the adorable finish, Rachel :-)

Such a cute finish!

Awww, this is just too cute!! I love it!

That is such a cute finish:)

Such a cute finish!